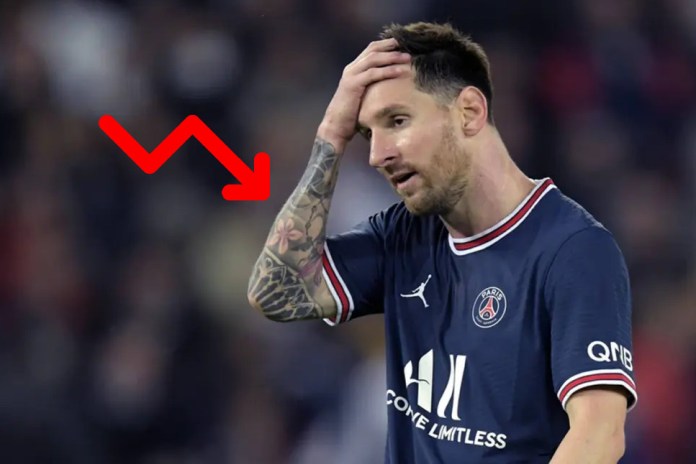 Ligue 1: Lionel Messi FAILS to get nominated for Ligue 1 Player of the Year Award – The shortlist for the Ligue 1 player of the year award for the 2021/22 season has been announced, and Lionel Messi has failed to make it to the list for obvious reasons. The Argentine football icon has had a tough season for the Ligue 1 champions, Paris Saint-Germain, but Messi getting snubbed in this manner is a very rare occurrence. Follow live football updates on InsideSport.IN.

Known for scoring upwards of 40 goals per year, Lionel Messi has set such a high benchmark for himself that even 30 goals per season seems like a flop show. In fact, the last time when Messi scored less than 30 goals per season was way back in the 2007/08 season, when he was still a 20-year-old kid rising through the ranks at Barcelona.

However, all of such benchmarks have gone for a toss ever since he joined Paris Saint-Germain at the start of this season. He has played 31 matches for the Ligue 1 champions but have scored only 9 goals – making it the first instance since 2005/06 when his goals tally is not in double digits. Of these 9 goals, only 4 have come in Ligue 1.

The superstar from Rosario has not lived up to the expectations at all, given that he was signed on a humongous deal by PSG. Quite understandably, he has not been included in the five-man shortlist for the big award, but Messi’s teammate Kylian Mbappe has made the cut. Besides Mbappe, Wissam Ben Yedder, Lucas Paqueta, Dimitri Payer, Lucas Paqueta and Martin Terrier have been nominated for the prize.

Though this was on the cards, Messi’s gigantic fanbase will still be heartbroken at this development as this is the first time since 2009 when the legend of La Albiceleste have not been shortlisted for a top award. In the last thirteen years, Messi has won nine La Liga Best Player awards, seven Ballon d’Or, and also eleven La Liga Best Forward awards.