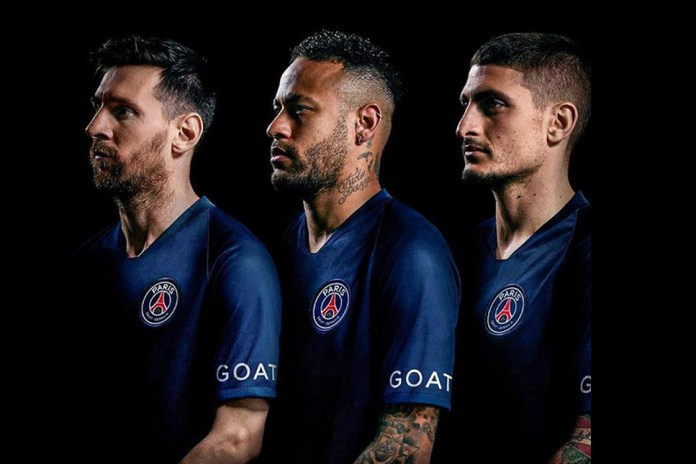 Paris Saint-Germain: Lionel Messi to wear GOAT on sleeve, PSG partner with GOAT as new Sleeve Sponsor – Lionel Messi who is regarded as the GOAT of football which stands for ‘Greatest Of All Time’ now be wearing ‘GOAT’ on his sleeve as PSG announce a new multi-year partnership with the next generation lifestyle platform. GOAT have linked up with PSG as an official partner until the end of the season and, from July 1. Follow InsideSport.IN for the latest sports news and updates.

PSG and GOAT partnership: GOAT have linked up with PSG as an official partner until the end of the season and, from July 1 onwards, will have their brand name on the sleeves of training, warm-up and matchday jerseys.

🆕📲👕@PSG_English and @goatapp, the global lifestyle platform announce a major multiyear global partnership that will see 𝗚𝗢𝗔𝗧 become the new official sleeve partner of the club from next season, with upcoming avant-garde collaborations ❤️💙https://t.co/QpMHdtYC9b

Paris Saint-Germain: Lionel Messi to wear ‘GOAT’ on his sleeve

The online platform, which offers luxury apparel and accessories via primary and resale markets, has over 30 million members across the globe and will now benefit from even more exposure after inking a deal with the Ligue 1 giants.

Messi has modelled the new design next to Neymar, Marco Verratti, Georginio Wijnaldum and Achraf Hakimi, with Kylian Mbappe a notable absentee amid ongoing reports linking him with a transfer to Real Madrid.

PSG’s chief partnerships officer, Marc Armstrong, has said of the union: “We are delighted to welcome GOAT into the Paris Saint-Germain family. Thanks to this partnership, GOAT joins the tight list of club partners present on our emblematic jerseys.”

“GOAT is the ideal partner for the club. It reinforces our position as an icon of sport and style with fans around the world. Together, we will develop exciting and creative experiences to delight fans everywhere.”

Eddy Lu, co-founder and CEO of the GOAT group, has added: “Paris Saint-Germain is one of the most influential clubs in the world and we are delighted to partner with them to continue building our global community.

“We bring together two great lifestyle brands to unite and mobilize communities of athletes, creatives and fans around the world. This partnership plays to each other’s strengths, with innovative collaborations in the months and years to come.”

Why is Lionel Messi called the GOAT?

Messi won numerous La Liga and Champions League titles during his 17-year stay at Camp Nou, which ended when his contract expired last summer, and is on course to add a Ligue 1 crown to his collection this season.

The 34-year-old has recorded eight goals and 13 assists since joining PSG on a free transfer, and will now have his nickname printed on his sleeve for the final year of his contract in 2022-23.