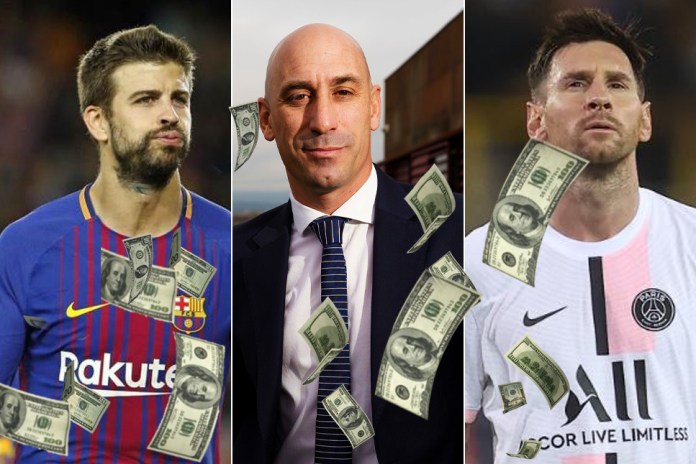 🚨[Albert Masnou🥇] | Pique offered Messi’s name to sell the Super Copa and also asked for Messi’s help in his video supporting the format and changing the league schedule, but Messi did not make the video. #fcblive pic.twitter.com/SDSMwiW61Q

According to Diario Sport and Football Espana, who claim that Pique floated the idea of using the Argentine to help get the deal done. Pique was a key player in the RFEF moving the competition from pre-season to winter and from Spain to Morocco and then Saudi Arabia. Lionel Messi’s name was also involved.

“We also have Leo behind it,” Pique said. “He’s going to send a video and everything, so we could say that the message is from all the Barcelona captains.”

To which Rubiales replied: “Well, condition it a little bit. Don’t condition it, but tell them that you’re going to send your video and also Leo’s and such.”

The president of the Spanish football federation, Luis Rubiales has been accused of a conflict of interest after the Spanish website El Confidencial reported the federation negotiated a 24-million-euro ($26 million) fee to be paid to Pique’s Kosmos in return for six tournaments in Saudi Arabia.

He has denied paying commissions to Kosmos, the events company founded by Barcelona defender Gerard Pique, as part of the Spanish Super Cup’s move to Saudi Arabia.

The 35-year-old founded Kosmos in 2017 and in 2018, struck a 25-year-agreement, worth 3 billion US dollars, to reshape the Davis Cup tennis tournament. “I recognize that it is not usual for a player to get involved in this type of business because, until we retire, we don’t usually commit ourselves to doing other things. “I like it, what do you want me to say? I like it, I have a good time and that’s why I’ve been doing it for years.”

Barcelona coach Xavi Hernandez said on Wednesday he has no problem with Pique’s business commitments. Barca play away at Real Sociedad in La Liga on Thursday. “It’s not a football issue,” said Xavi. “He’s like that, an extrovert, he likes to be in the spotlight.”

Xavi added: “If I thought he was distracted I would tell him but I think it’s like a drug for him, it’s adrenaline. I know him well, he has given us some awesome performances recently and we’ve missed him.”