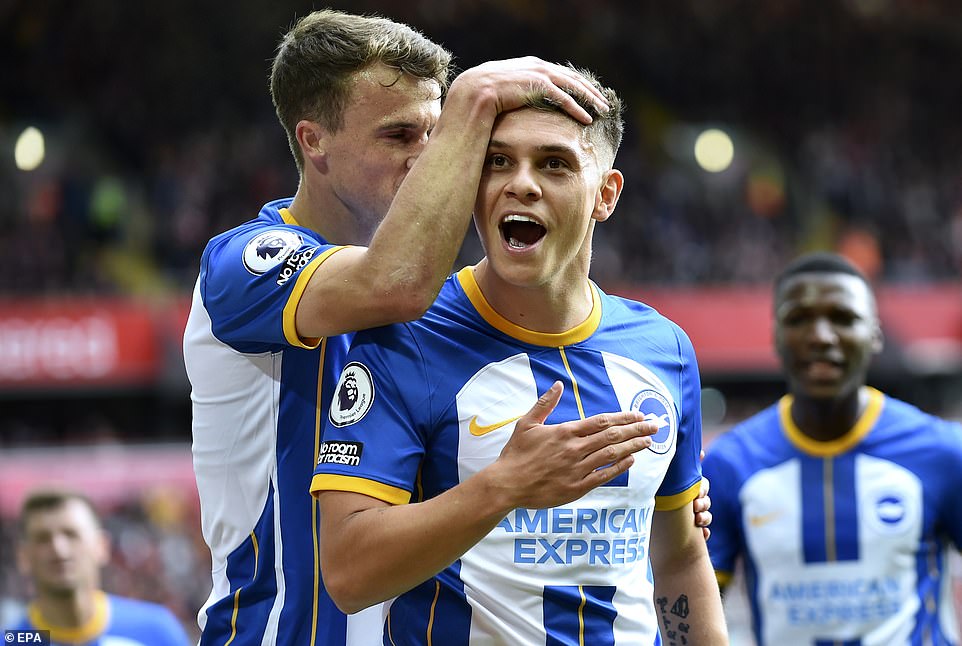 New Brighton manager Roberto De Zerbi couldn’t have asked for a more dramatic start to life in England but shouldn’t expect every Premier League defence to be as generous as Liverpool.

Leandro Trossard was The Seagulls hero with a brilliant hat-trick, the first scored by an opposition player at Anfield since Arsenal’s Andriy Arshavin in 2009, yet Liverpool fans will be more concerned by the lapses from their own team.

Poor Trent Alexander-Arnold, already under scrutiny with England’s World Cup squad to be announced soon, was culpable in both of Trossard’s opening goals in the first 17 minutes. 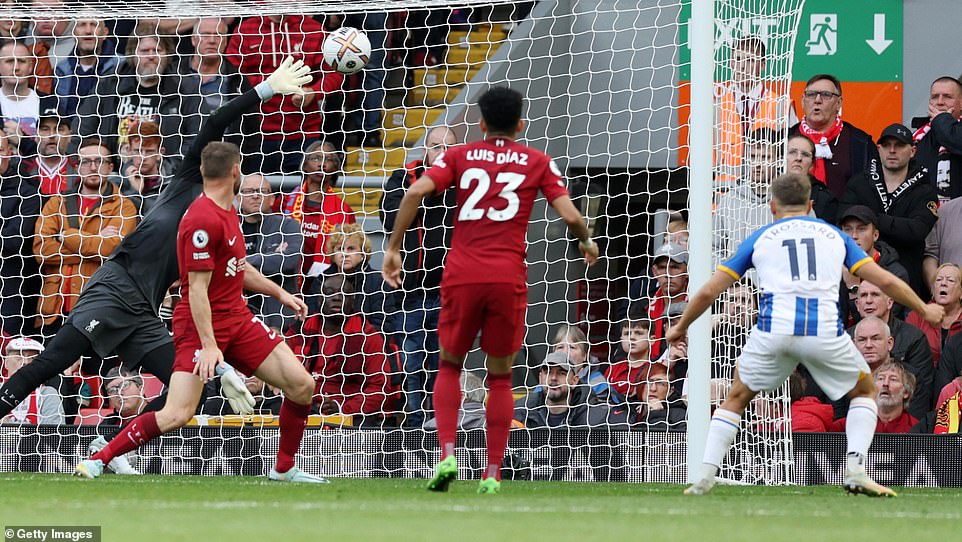 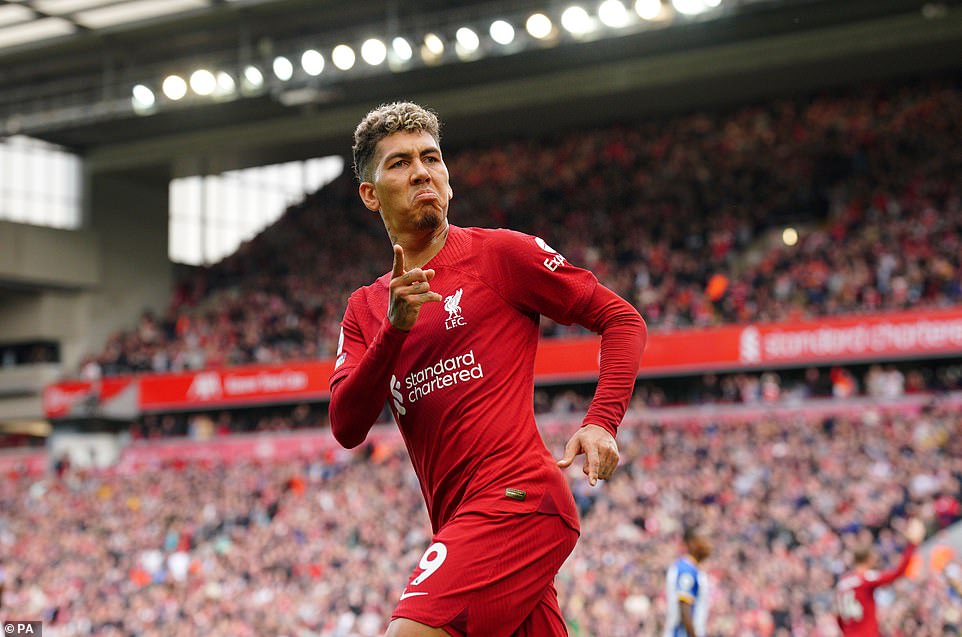 Roberto Firmino had seemingly led the Reds to victory, with two well-taken strikes before Adam Webster’s own goal 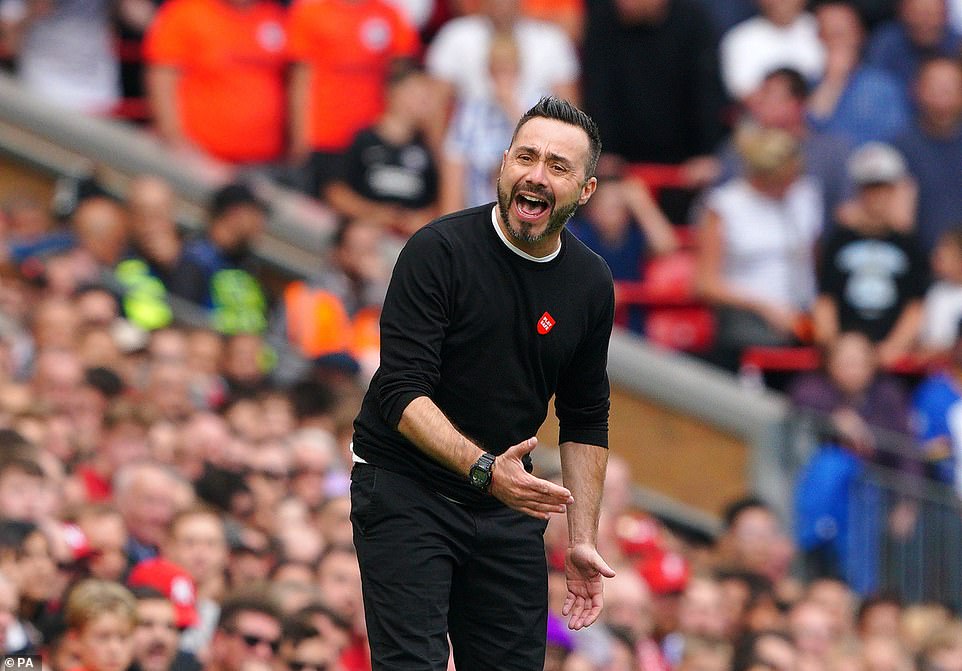 And even when Jurgen Klopp’s men rallied in typically ebullient fashion to turn a 2-0 deficit into a 3-2 lead, they threw the win away with seven minutes left.

Substitute Kaoru Mitoma sped down the flank on Alexander-Arnold’s side and when his cross reached the penalty area, Virgil van Dijk took a clearing swipe and missed.

At the far post, Trossard didn’t, striking his finish with such power that Alisson could only help push the ball into the roof of the net.

Brighton’s previous manager Graham Potter was rather polite and had a touch of the Tim Henmans about his celebrations. No danger with De Zerbi’s crew who marked all three goals with jumps, hugs and wild punches in the air.

‘Leandro is a crack (star player),’ said the Italian about his goal hero. ‘I sent him a message when he was with the Belgian national team that he should increase the number of his goals. I don’t think he’s finished scoring.

‘I believe Potter deserves some praise because he left me a great team. I have tried not to make any damage and of course I will add my ideas on top.’

Having presided over great success in recent years, Liverpool are currently mid-table and Jurgen Klopp viewed their latest collapse as a throwback to his early days when they were mentally fragile.

‘It reminded of that time. We’d be only one goal in front and everyone was nearly having a heart attack,’ he said.

‘We should have defended all three goals better, there is no doubt about that. We have to fight through this. The boys can play much better and my job is to create a situation where they can deliver.

‘We are under pressure, we do not ignore that. It is really a moment we have to come through together.’

It had been 28 days since Liverpool had last played a Premier League game but it was Brighton, who lost Potter to Chelsea during that period, who treated the first blow of the referee’s whistle like a starting pistol.

After four minutes, Alexander-Arnold probably wished he was back on international duty. His clearing header went high in the air and not far enough. Jordan Henderson couldn’t gain control and Brighton took full advantage.

Alex Mac Allister fed Danny Welbeck and he backheeled for Trossard whose sharp turn left Alexander-Arnold on the floor before he shot past a helpless Alisson..

Incredibly, Brighton should have added a couple more through Welbeck and Trossard before they did score a second after 17 minutes. 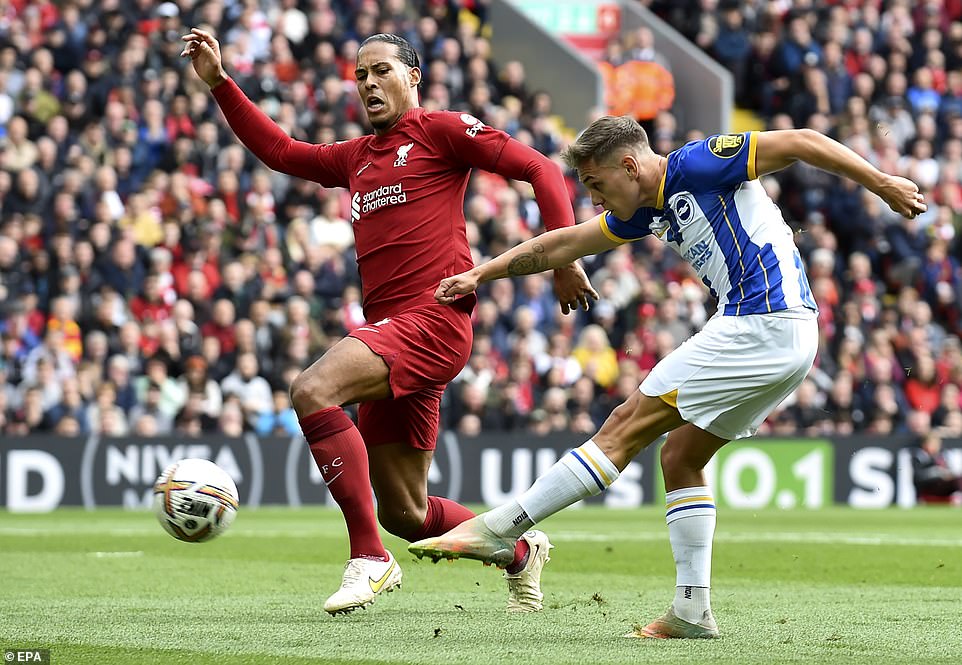 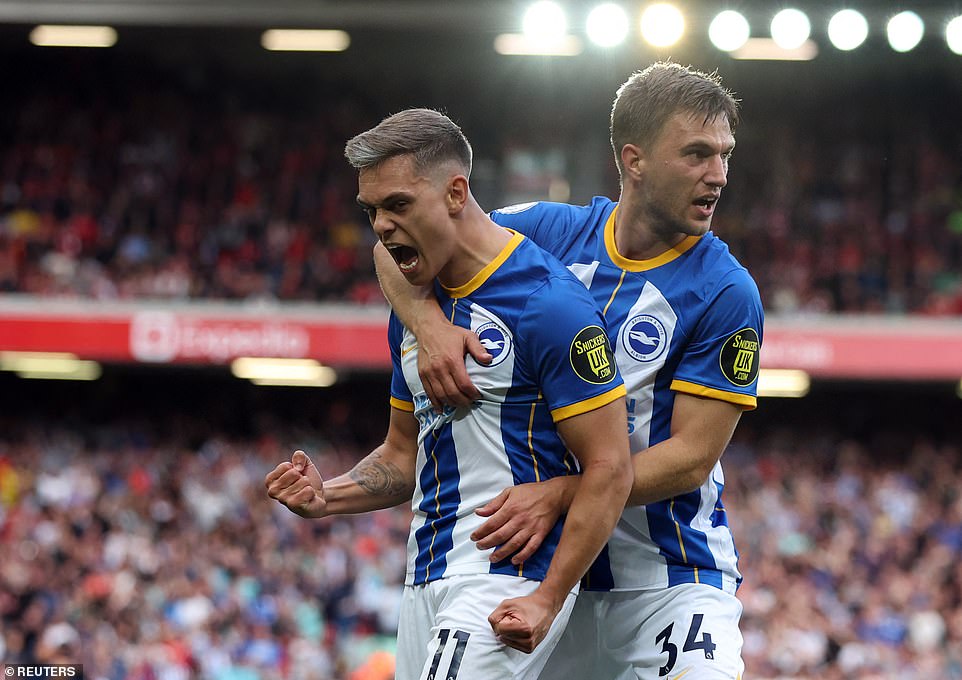 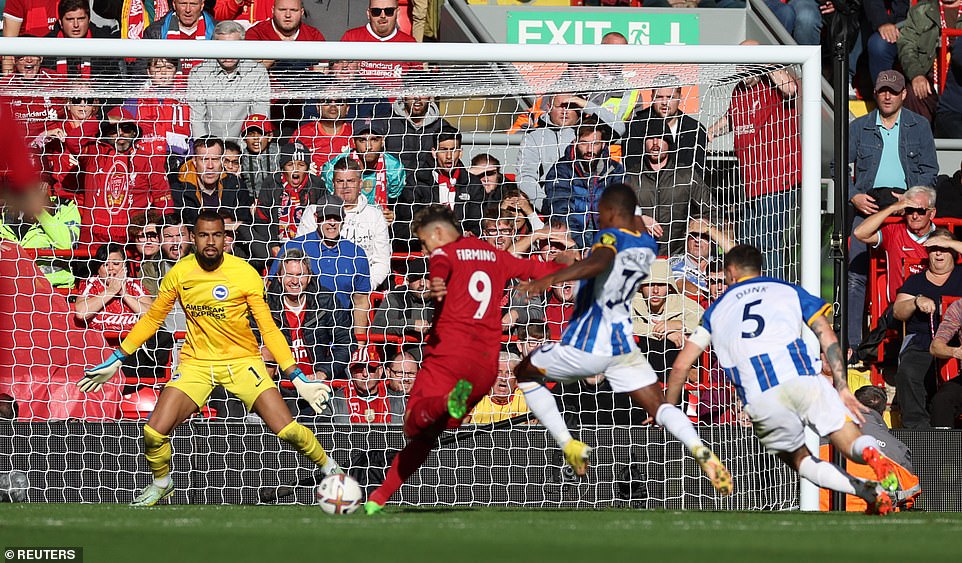 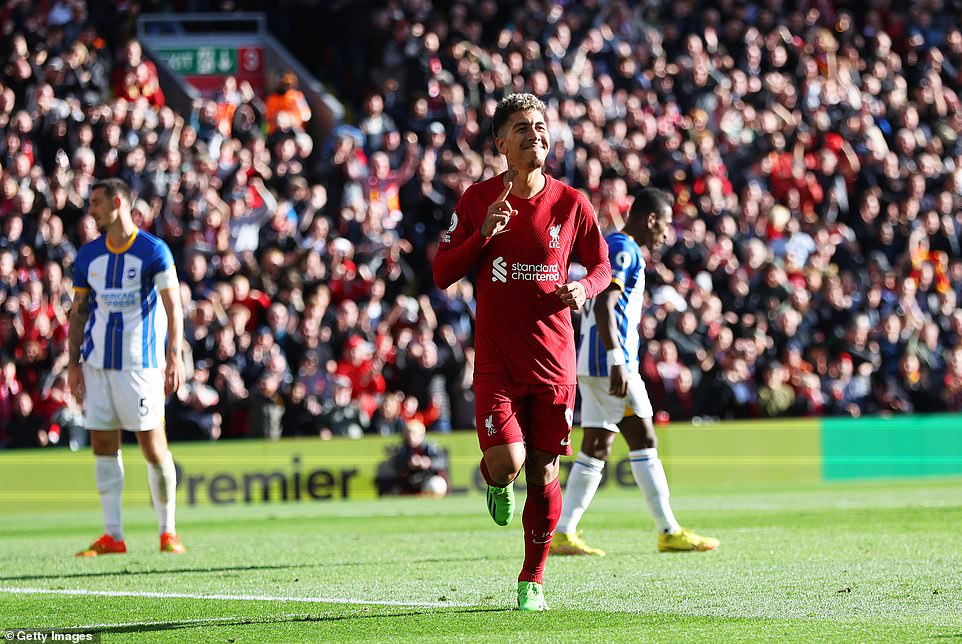 Again, Alexander-Arnold played a part, failing to control a clearance with his chest and letting the ball run to Welbeck.

From there, Brighton’s football was beautiful. Welbeck pulled back a cross from the edge of the box to Solly March whose first-time pass into Trossard was met with a thumping left-foot finish by the Belgian.

Anfield fell silent aware that Liverpool had not lost a home league game for 19 months. It took some needless timewasting from Brighton’s Pervis Estupinan at a throw to raise the volume and the momentum finally shifted.

Robert Sanchez made a fine save to deny Mo Salah and then Salah just kept onside to turn Henderson’s clipped pass towards Roberto Firmino who shot home.

The goal was initially given offside but a VAR check showed Salah was in line with defender Adam Webster. 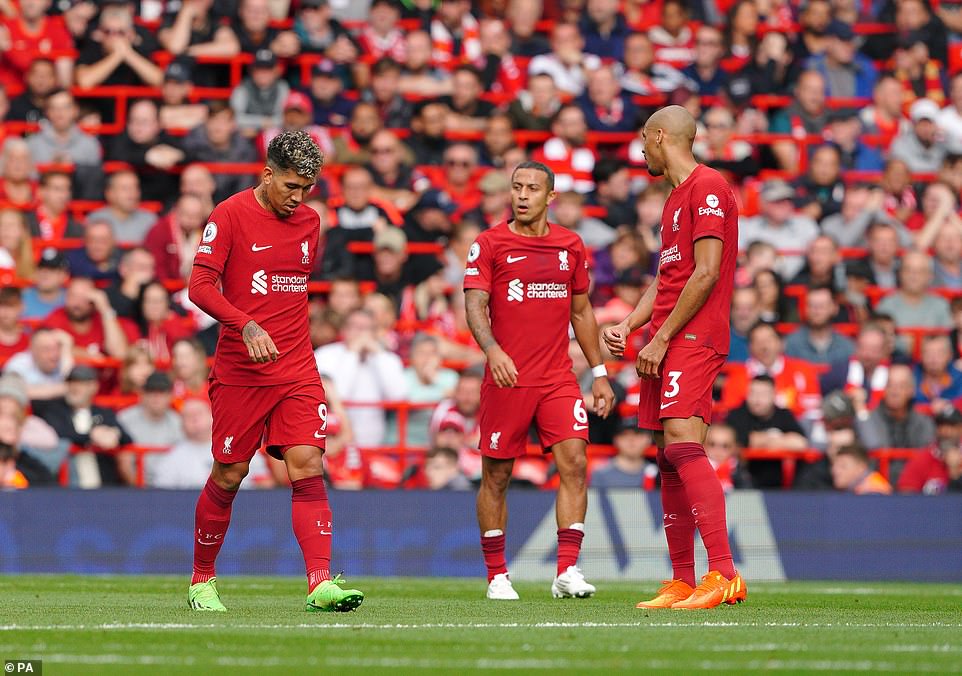 Luis Diaz replaced Fabio Carvalho at the interval and gung-ho Liverpool appeared to swing the game completely in the autumn sunshine.

After 54 minutes, Joel Matip made a vital clearance with his heel to stop Welbeck making it 3-1 and seconds later Liverpool had gone up the other end with a devastating break to equalise.

Henderson and Thiago played their part and when Diaz played a final pass into Firmino, he took a touch with his right foot to turn past Lewis Dunk before finishing with his left.

It looked as if redemption was on its way for Liverpool when they took the lead just past the hour – and fitting that Alexander-Arnold should claim an assist.

His corner was whipped in and forced Sanchez to punch the ball against his defender Webster for an unfortunate own goal.

Instead of laying the foundations for Liverpool, they looked increasingly jittery as the clock ticked down.

Alisson needed to make a fantastic reflex save to deny Welbeck but Brighton earned their just rewards.

Mitoma galloped down the Liverpool right and when his cross evaded first van Dijk and then Welbeck, Trossard made no mistake.

‘It’s good to get a point here. I love all the fixtures but obviously this is a big game so I wanted to show myself in the best possible way,’ he said.

Candid Liverpool defender Joel Matip summed up the mood in their camp afterwards. ‘We’re absolutely not happy. Alisson was there to save our backs again and hopefully he does not have to make as many stops in the future.