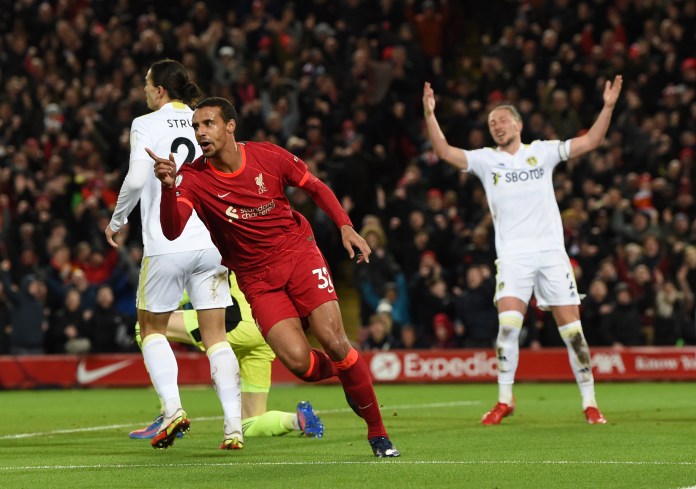 Liverpool 6-0 Leeds United Highlights: Liverpool – Liverpool have crushed Leeds United in their Premier League clash, defeating the visitors 6-0 at Anfield to move within three points of Manchester City at the top of the table. The Reds were three goals to the good in the first half as Mohamed Salah scored two penalties to take his tally to 19 Premier League goals for the campaign, while he also provided an assist for Joel Matip to find the net. Sadio Mane then notched a late double with close-range finishes before Virgil van Dijk put the icing on the cake with a firm header in stoppage time.

Liverpool are next in action in the EFL Cup final against Chelsea at Wembley Stadium on Sunday. Leeds take on Tottenham in their next Premier League match on Saturday at Elland Road.

Liverpool close the gap in the table to just three points after a dominant win over Leeds. Things got off to a strong start for the hosts right from the first whistle as Jürgen Klopp’s side put on a determined performance to shake up the title race.

Their persistence would eventually be rewarded after VAR let Mohamed Salah step up to the spot and send Illan Meslier the wrong way for 1-0. As the first half continued, Leeds struggled to handle Liverpool’s various threats from Luis Diaz and Andy Robertson but did cause a scare when Raphina thought he equalised only to be ruled offside.

Minutes later, however, the visitors’ progress was sent backward after Joël Matip finished off a slick move to ease any pressure and another Salah penalty made things 3-0. Coming out after the break Leeds were able to keep the scoreline down for most of the half until Sadio Mané found his scoring touch and Virgil van Dijk added another late on to wrap things up 6-0. The result means Liverpool sit just behind leaders Manchester City while Leeds sit fifteenth.