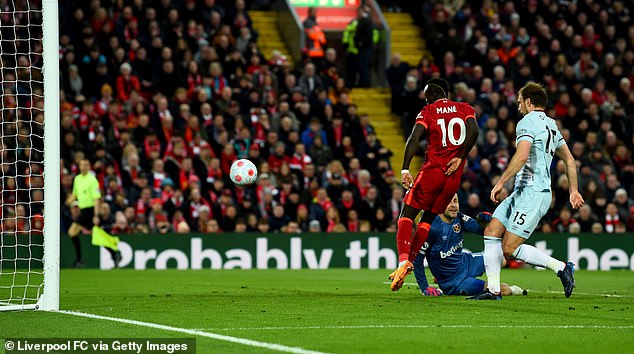 Just one goal for Liverpool fans to cheer against West Ham but there were four more moments for Jurgen Klopp to celebrate on a hugely important day.

Sadio Mane will go into the record books as the man who settled an absorbing contest that was loaded with tension but, for Liverpool’s manager, there were highlights from Trent Alexander-Arnold, Andy Robertson, Naby Keita and Ibrahima Konate that were every bit as significant.

David Moyes was well within his rights to believe his team had done enough to warrant a share of the spoils, but the reason they were beaten was down to the fact they were up against men who were determined to put their bodies on the line. 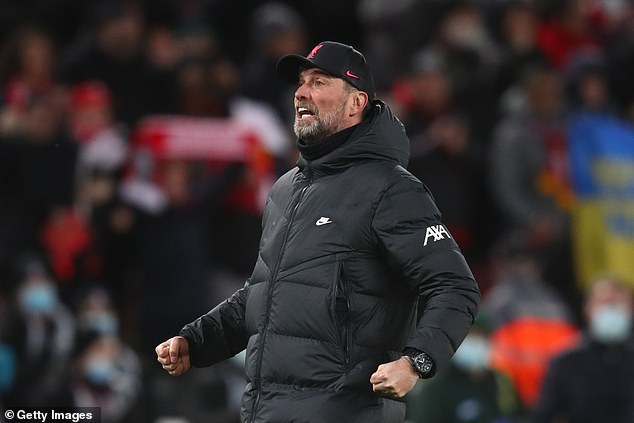 First Alexander-Arnold slid in to hook away a Pablo Fornals effort, then Robertson hared after Jarrod Bowen to stop him dead in his tracks as he shaped to shoot, Keita also scurried after Michail Antonio to put out a timely foot and a Konate header in stoppage time demanded to be described as ‘towering’.

Each episode was met by Klopp thundering his hands together in approval and roaring his appreciation. He was, in some respects, even more animated than when Mane was in the right place to turn in Alexander-Arnold’s perfect 27th-minute cross. 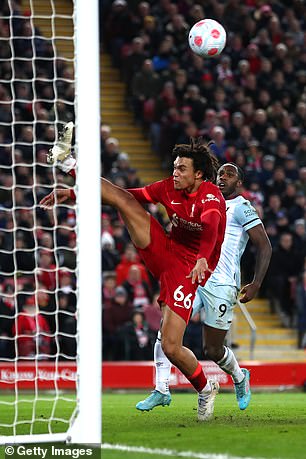 ‘All these situations, for me, were like scoring a goal to be honest,’ said Klopp.

‘But inside it is exactly the same importance for me. If we speak about the game again then I will consider that exactly like that, like we scored a goal. That was the story of the game: we couldn’t finish it off so the door stayed open and they nearly went through.’

But they didn’t. Liverpool, for the fifth time in seven Premier League games, kept a clean sheet and that is the reason they are putting pressure on Manchester City. They are defending like tigers, refusing to yield when things don’t run smoothly.

Moyes must have felt there was a chance he would win at Anfield in the league for the first time and it is not that his team were without opportunities. The best of which arguably fell to Manuel Lanzini in the 70th minute but he was put off by Alexander-Arnold. 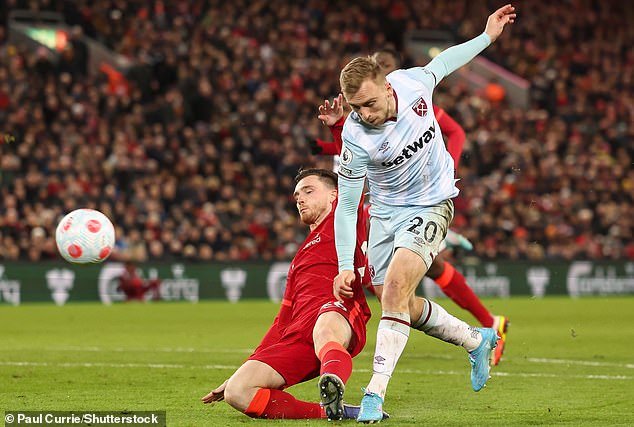 51 mins: Andy Robertson slid in with an inch-perfect challenge as Jarrod Bowen was about to fire on goal

And this is what registered through it all. West Ham — well-organised and determined — showed why they are capable of qualifying for Europe once more, but this was like a boxing match where one fighter keeps throwing jabs but the bobbing and weaving of their opponent means they never land.

Maintain this endeavour in Spain on Thursday — they hope Declan Rice will be fit after illness prevented him travelling to Merseyside — and they will ask serious questions of Sevilla in the Europa League, but this was a reminder of the need to be ruthless.

‘We could have scored three goals in the first half,’ said Fornals. ‘It was the same against Southampton. We need to improve and put the ball in the goal. I’m really disappointed, personally, because I didn’t take the chance.’

Perhaps there will soon be a day when Liverpool’s high line gets sprung, but when you saw Keita scampering, Fabinho stretching out one of his legs and the relentless Robertson running himself to a standstill, it was obvious how much the clean sheet meant. 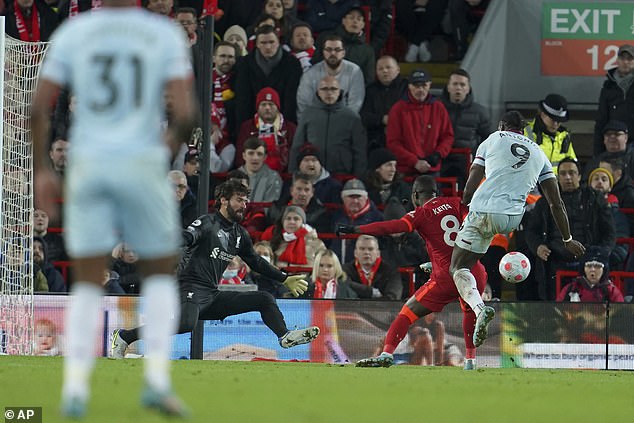 80 mins: Naby Keita stuck out a perfectly timed boot to block an effort from Michail Antonio 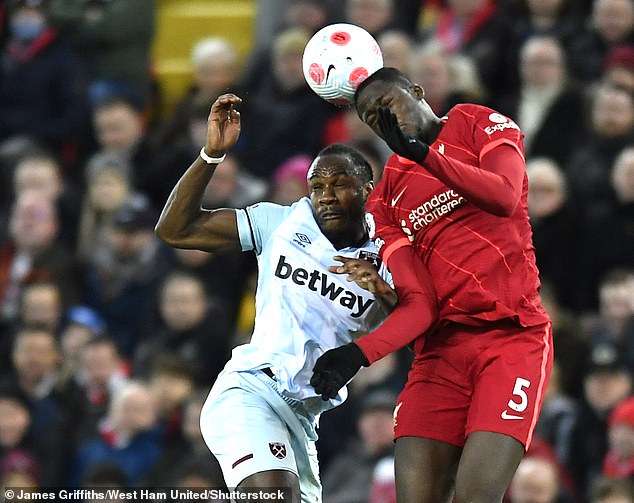 90+4 mins: Ibrahima Konate put in a commanding header at the death for Liverpool

Robertson found himself engulfed in a Klopp bear hug shortly after the final whistle — and deservedly so, as he was the man of the match — but his fellow wing-man Alexander-Arnold, who moved his assist count up to 16 for the season in all competitions, also received liberal praise.

‘I don’t understand (criticism of his defending), that’s true,’ said Klopp. ‘If he couldn’t defend, he would not play here. He improved in all departments and in his defending, of course, as well.

‘We try to bring him into positions, formation-wise, where he can be influential but of course it’s all about him and his skillset and his quality and his right foot and his overview. His defending is not a problem we have.’

Liverpool, as it stands, do not have too many problems at all. When they can withstand an off-day from Mohamed Salah and still power through, it shows where they are. The mean machine is in full working order. It promises to serve them well.