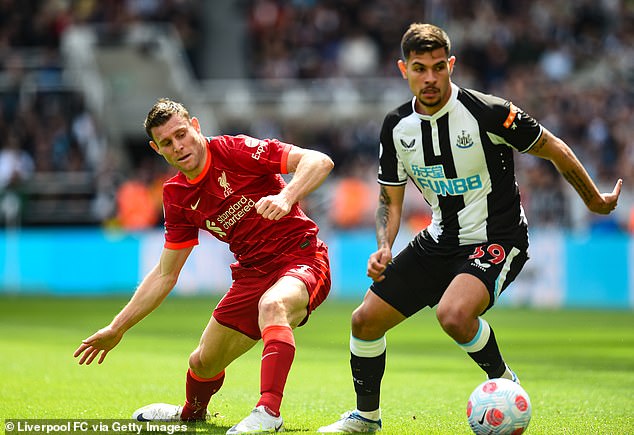 James Milner lauds ‘incredible’ boss Jurgen Klopp, insisting ‘the longer he stays, the better for Liverpool’… but warns Quadruple-chasing team-mates it will be just an average season if they do not add to their Carabao Cup win

James Milner folded his arms and fixed a glare that made it abundantly clear he was not interested in discussing what-ifs and possibilities.

The eldest member of the Liverpool squad had been unexpectedly called up at Newcastle and produced the kind of performance that has made him so trusted by Jurgen Klopp. He was a constant, snapping menace who would not let standards drop.

It says everything about Milner’s ability — and durability — that he continues to make a difference. Now 36, he and Divock Origi are the only starters from Klopp’s first game, at Tottenham in October 2015, still at Anfield. Jordan Henderson was out injured that day. But Origi will leave when his deal expires this summer.

Will Milner, whose contract is also up? Nothing has been decided. Talks have taken place about an extension and Klopp would be delighted to keep him, but there is still negotiating to be done. If he leaves, the former England man has no intention of retiring. Such decisions, however, are the furthest thing from his mind at present.

The here and now — and the pursuit of history — is what matters and the possibility of lifting four trophies is still alive following a determined 1-0 win at St James’ Park. So, can Liverpool win the lot?

‘It’s what you guys talk about,’ said Milner, with a bat so straight he could have been facing the first ball at Lord’s. ‘For us, it’s the next game. It’s every three days now. We recover, prepare, we go again. It’s a cycle.’

That next game is the second leg of the Champions League semi-final, tomorrow at Villarreal. Liverpool secured a 2-0 lead in the first match, 24 hours before Klopp signed his own contract extension last week. That speaks volumes about the club’s potential. 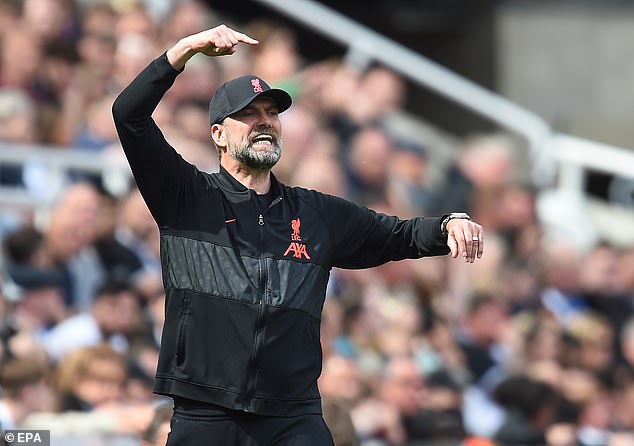 ‘Yeah, we’re happy — he’s not a bad manager, is he?’ said Milner. ‘It’s outstanding. To be here from the start when he came in and see that process, bit by bit, seeing signs but not having the consistency every week and then building it. It’s been one big process.

‘He’s done an incredible job and the longer he’s here, the better for the club. It’s credit to everyone. We’ve been lucky enough to win one trophy this year but if we don’t win anything else it’s an average season for the club.’

There it was: the warning. So close to the finishing line but still so far away. You might think there is excitement building but a more accurate way to describe it is that nervous tension is the overriding emotion, a concern that all the prizes within touching distance will prove out of reach.

The tension, though, is not impacting their play. Liverpool produced one of their best performances of the campaign here, quietening a hostile crowd and playing in patterns that left Eddie Howe and his assistant Jason Tindall scratching their heads. 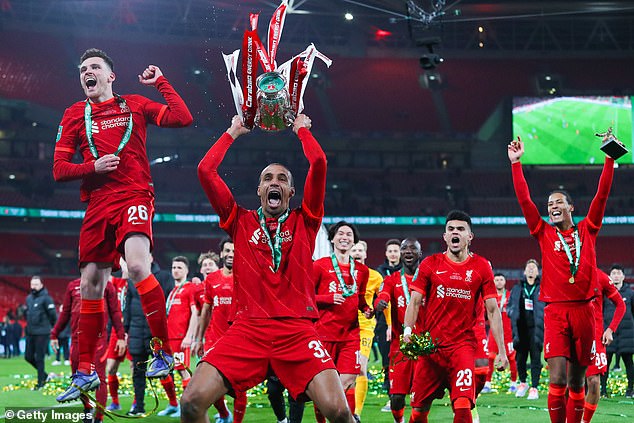 Newcastle had been on a fine run under Howe but this was a sobering afternoon, a reminder that they are in another parish to Liverpool. Bruno Guimaraes, their £40million January signing, barely got a kick in midfield. Allan Saint-Maximin was put under lock and key by Virgil van Dijk.

‘The games seem more important when you get closer to the end of the season,’ said Milner. ‘We know they’re playing really well, they’re a good team and we know it’s always a tough place to play with the atmosphere.’

Howe gave Milner — ‘an outstanding professional who always looks as if he does the right things’ — and Liverpool credit for a thorough job done and had no complaints about Naby Keita’s goal being allowed to stand after Milner began the move with a thundering tackle on Fabian Schar.

Milner smiled when he heard the praise but the game face was quickly back on. He will be ready to help as Klopp tries to mastermind something spectacular. ‘I just want to contribute in any way I can,’ he said ‘It’s an unbelievable club and it starts from the manager.’