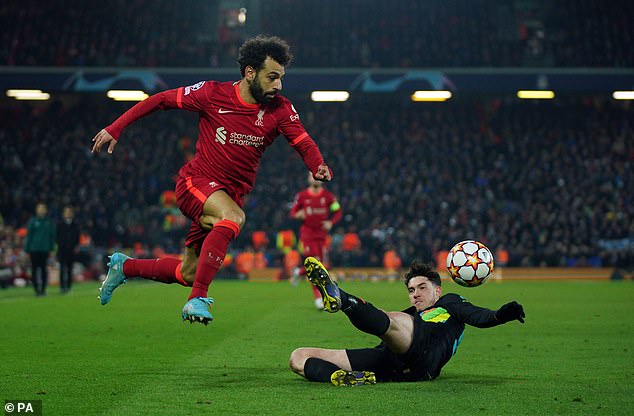 Mohamed Salah believes Liverpool will benefit from their first Anfield defeat in more than a year as they crept into the Champions League quarter-finals.

Liverpool were beaten 1-0 by Inter Milan – who, thanks to Lautaro Martinez’s super strike, became the first successful visiting team since Fulham 366 days ago – but managed to squeeze through to the last eight for the fourth time in five years after winning the first leg 2-0.

Salah had opportunities to remove the tension from the night but he struck the post twice in the second half; defender Joel Matip also headed against the bar before the break while substitute Luis Diaz was denied a goal by an outstanding clearance from Arturo Vidal.

This was Liverpool’s first loss since December 28 – a run of 15 games in all competitions – but Salah was eager to look at the positives and suggested it had not come at the worst time as they pursue an unprecedented quadruple.

‘Inter are a tough team; we struggled in the beginning we got the ball up in the second half more and once they got the red card we were OK,’ said Salah. ‘I hit the post twice, it was one of those nights. Maybe in the next game I can score three! I don’t mind not scoring, as long as the team wins.

‘The most important thing is to go through. Inter started well from the beginning, we had a little bit maybe in our mind as we were winning (from the first leg). It was good we can take the result, learn from it and carry on.

‘We have lost but sometimes it can give you a push. Thankfully it’s not in the league. We’ve qualified and so the good thing is we are through. Everyone wants to win those trophies; we want to win the Champions League and Premier League. We are going to fight for both and let’s see what happens.’

If they are going to play every possible game from now until the Champions League final on May 28, Liverpool’s schedule will be 19 fixtures – starting on Saturday at Brighton – in 65 days, taking out the fortnight break for internationals.

Liverpool have been on an incredible run of form, one that has enabled them to reignite the Premier League title race, but they are going to have to quarry new levels of mental resilience to cope with the intensity and pressure of having to win, win, win.

‘The art of football is to lose the right games,’ said Klopp. ‘I still hate that we have lost. If there was a game we could afford to lose it was this one. I’m not over the moon but I’m really happy we have got through. We both won games over the two legs and it’s right that we got through.

‘I didn’t like the first 20 minutes. The goal we conceded, we should not have conceded. We could have played better, not too much better because the opponent was really good. But if we use one or two chances, it is a completely different story.’

Simeone Inzaghi, Inter’s manager, was left to rue his team switching off in the final 15 minutes of the first leg in Milan much more than the red card for Alexis Sanchez that arrived shortly after Martinez’s goal.

‘We really knocked them back when we scored our goal and then Sanchez got sent off and we saw what happened,’ said Inzaghi. ‘We played well but I am more bitter about the game in the San Siro than what happened here.’