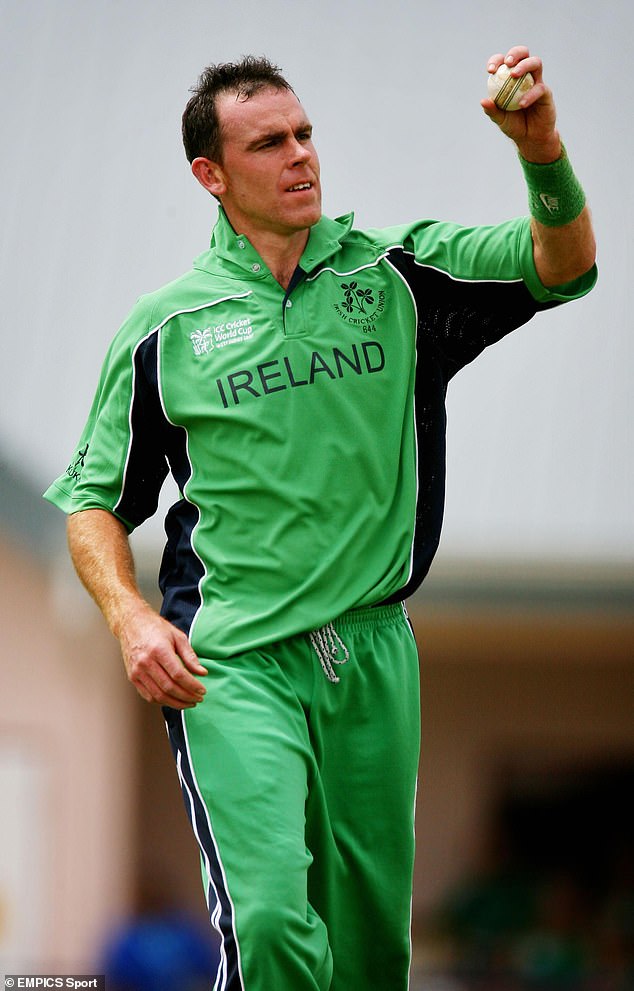 A love rat Aussie cricket coach caught out cheating on his wife during months-long overseas tours has sensationally quit his job after returning to meet with his bosses at Cricket Hong Kong.

‘Johnston’s position as coach is understood to have become untenable after an Australian tabloid published lurid details of an extramarital affair he was accused of having while he was away with the Hong Kong team this summer.

‘At the time the story broke, cricket bosses in the city said that they were “disappointed” by the revelations, and would discuss the coach’s position on his return from Australia, where he had gone after the side’s successful Asia Cup campaign.’

The cricket Hong Kong statement said that, even without the revelations, Johnston’s position was under review.

‘The decision to quit has spared Cricket Hong Kong from having to decide whether to dispense with their coach, although it is possible that missing out on the T20 World Cup, or the chance to regain the team’s One Day International status, could have prompted a change in any case.’ 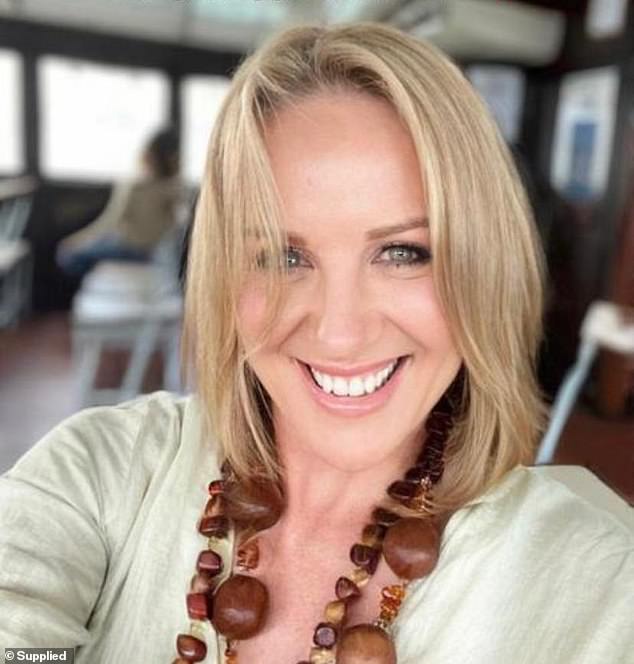 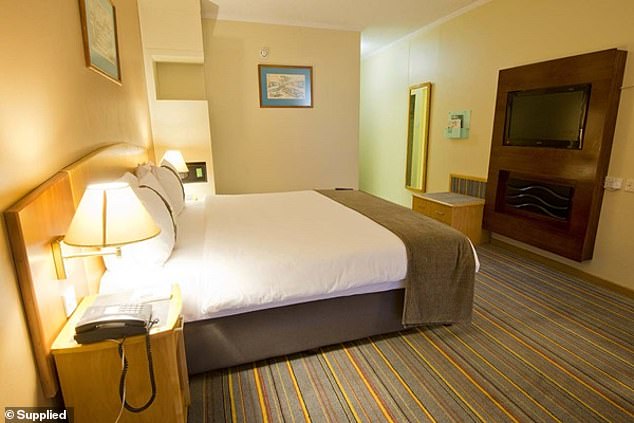 Daily Mail Australia made the revelations about Trent Johnston’s extramarital affair in Zimbabwe and saucy texts with women in England and Dubai, while he was touring with the Hong Kong team over three months in the Northern Hemisphere summer.

Johnston’s extracurricular liaisons were laid bare when he returned to Australia after the Hong Kong side failed to qualify for the T20 World Cup currently being played here.

During what was intended to be a romantic reunion with Joanne Bell, his property agent wife, he gave her his laptop to watch a cricket match while he went to the pub.

When it began pinging with WhatsApp messages, a shocked Ms Bell discovered her husband of 2.5 years had been cheating on her with other women while on cricket tours overseas.

‘We are done. Our marriage is over,’ she immediately texted Johnston.

The laptop revealed he had sex with a woman at the Bulawayo Holiday Inn while on tour in Zimbabwe, and took another woman up to his room in the Al Habtoor City Hilton hotel during the Asia Cup tournaments in Dubai. 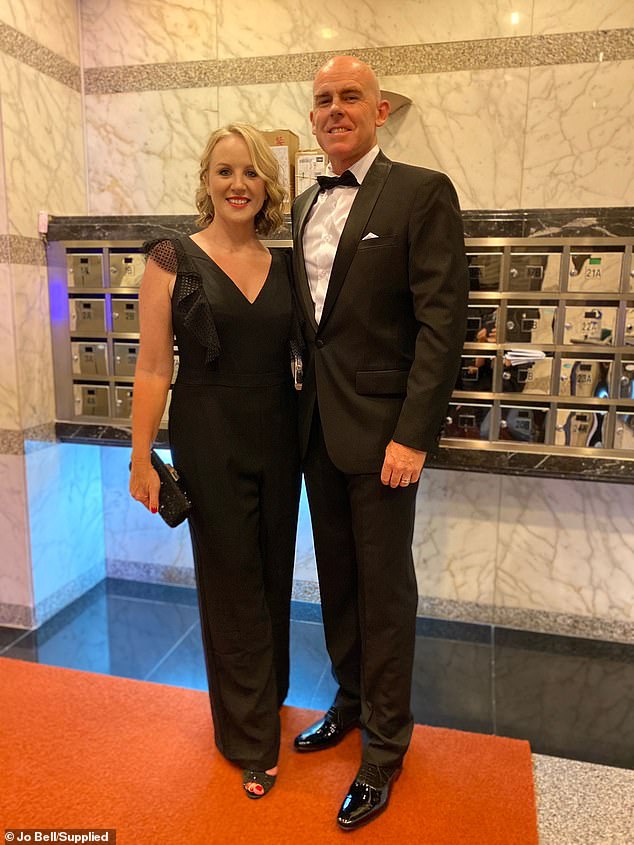 Joanne Bell found the texts her husband Trent Johnston (above the couple together) made while he was on tour with his international Hong Kong side in England, Zimbabwe and Dubai 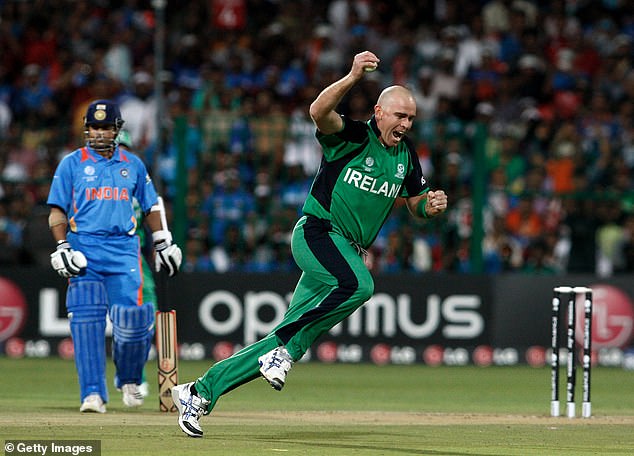 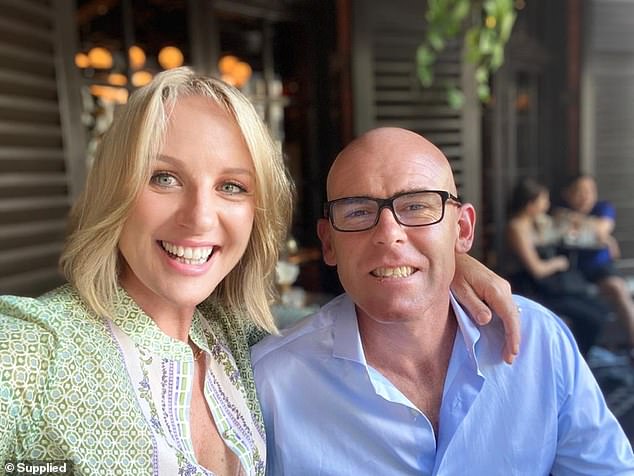 Johnston and another coach – who cannot be named –  hooked up with two actress-models ‘A’ and ‘LM’ who spent time in their rooms at the Dubai Hilton in September this year.

Daily Mail Australia obtained the racy texts between Johnston and the two women in Dubai, as well as the Zimbabwean women he slept with during ICC T20 World tournament tour.

Texts also included topless nude photos sent to him by a woman via the dating app Bumble while he was in training camp in Britain between the tours.

In the Bumble exchange, Johnston told the woman she was ‘amazing in the shower’. 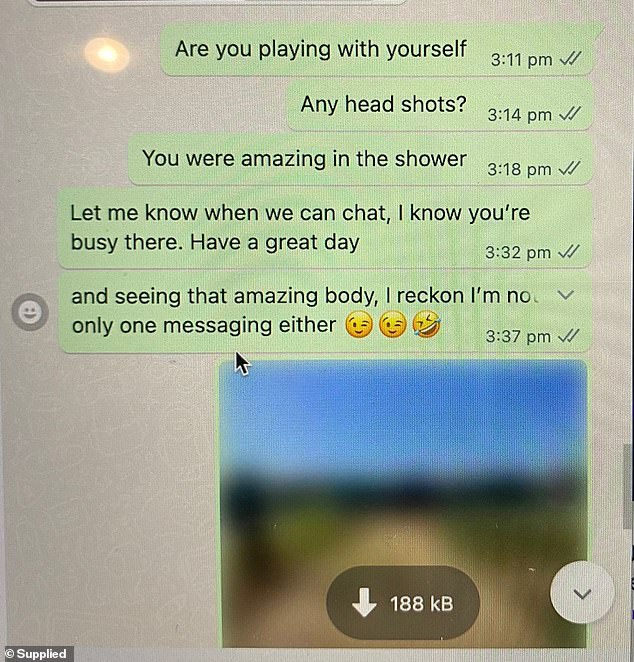 ‘You were amazing in the shower’: international cricket coach Trent Johnston’s text to a woman on the dating app Bumble while he was on training camp in Kent, UK

During flirty exchanges with the African woman he spent the night with in Zimbabwe, Johnston had texted, ‘I have an itch for you to scratch young lady’.

Trent called two of the other women he exchanged messages with ‘young lady’ and repeated the term with the woman in Zimbabwe, ‘M’.

Daily Mail Australia protected the identities of all the women who had contact with Trent Johnston on tour by using just their initials.

Trent complained to ‘M’ that he had got stuck with coaching duties around 2.15am before getting back to his room where she was.

She later texted him to say ‘thank you for an unforgettable moment’.

He texted back, saying ‘wow, thank you for coming over and spending hours in a strange man’s hotel room …  it gets this old bugga a little, sorry a lot excited … haha.’

While he was packing to leave Zimbabwe, she texted him to say, ‘should I come and join you for the shower’, adding a coy laughter emoji.

Trent replied, ‘I have an itch for you to scratch young lady’. In another exchange he asked her ‘what do I wear to bed’ and she replied, ‘I don’t wear anything’, and adds a  playful ‘see no evil’ monkey emoji.

The teams playing in Zimbabwe at the World Cup Qualifier ‘B’ tournament were all vying for a spot to play in the A division of T20 in Australia which started on October 16 and continues until mid-November. 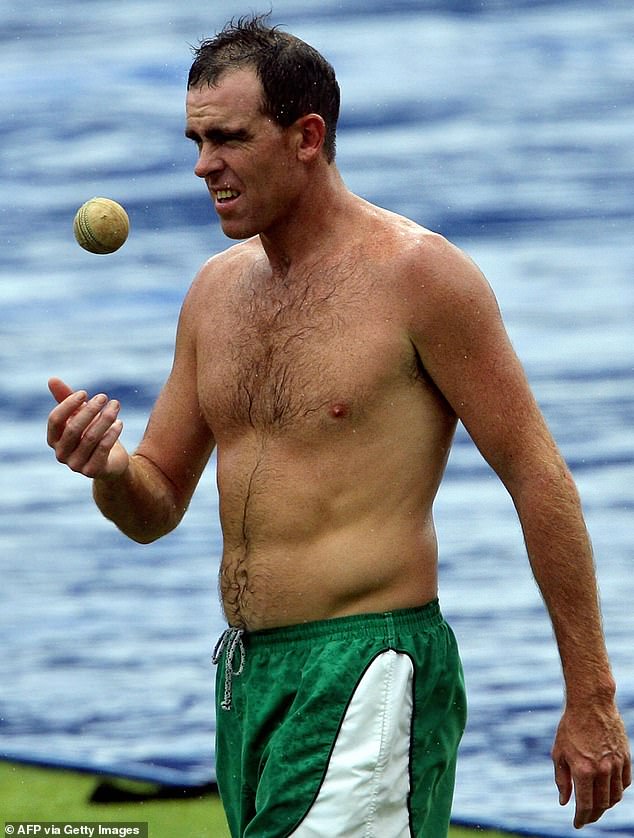 Trent Johnston (above in Kingston, Jamaica in 2007) forged a career as an international cricketer in Ireland where he captained the team and toured the world 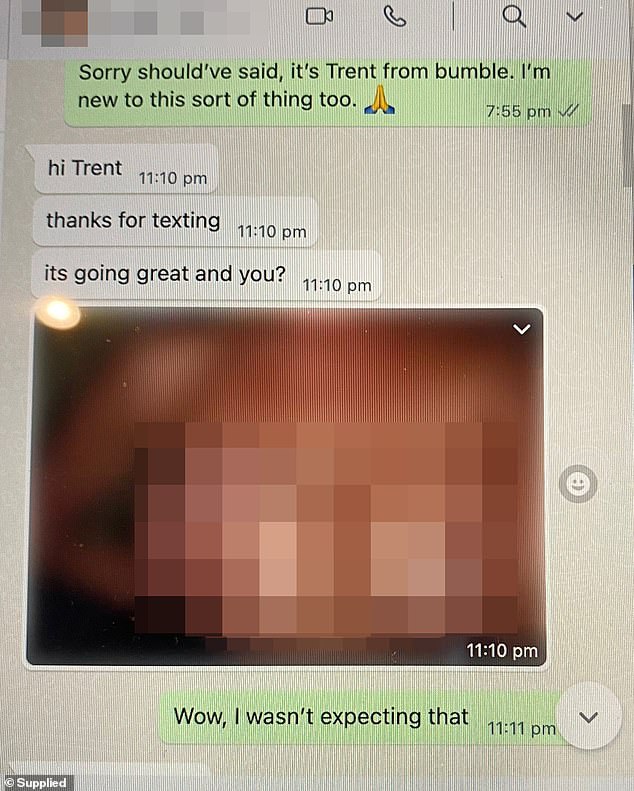 Bumble dating app exchange between Trent Johnston and a woman ‘MJ’ while he was in training camp in Kent, UK with the team he coached, the international Hong Kong men’s side 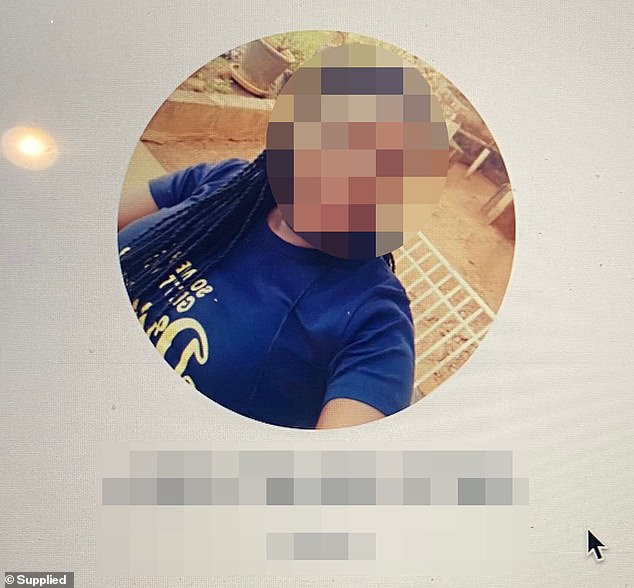 The woman ‘M’, Trent Johnston spent a night with in Zimbabwe as his Hong Kong side competes in ICC T20 World tournament qualifying matches for a chance at playing in Australia 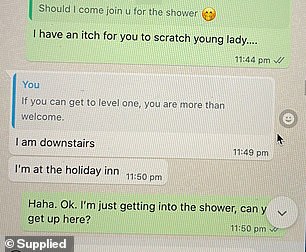 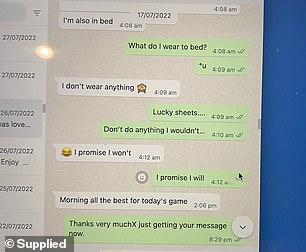 Texts between Trent Johnston and ‘M’ in Zimbabwe talk about sleeping nude in bed, and the cricketer saying ‘I have an itch for you to scratch young lady’. The times of the texts are in AEST, eight hours ahead of Zimbabwe

Johnston’s Hong Kong team won one out of two qualifying games and didn’t advance to the semi-finals in a tournament which was ultimately won by Zimbabwe.

Joanne Bell contacted the woman ‘M’ her husband had met in Zimbabwe to ask her if during their ‘unforgettable’ night together, Trent had worn a condom.

M told Joanne that Trent had, but Ms Bell said she nevertheless got herself tested twice after learning that Zimbabwe has one of the highest rates of HIV in the world, with over 20 per cent of the adult population carrying the virus. 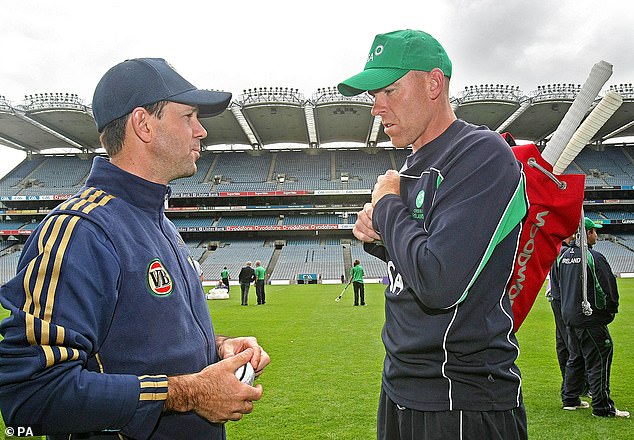 Trent Johnston (above in 2010 with then Australian captain Ricky Ponting in Dublin) played for NSW but only began his international career after moving to Ireland, which he captained

2.19pm: Trent: ‘Are they really yours? There is blood flowing to a few interesting parts right now. I’m working at the moment. What sort of pics you looking for young lady’

2.23pm: Trent: It will have to be later I’m out coaching at the minute. The boys would be surprised if I started taking photos… you got any more to get me through this last hour? Are you in Wales at the moment?

After an hour’s hiatus, Trent texted, ‘you’ve gone silent on me’, to which ‘M’ replied, ‘let’s chat when you’re not “coaching”.’

Presumably he tried to call ‘MJ’, who texted an hour after that, ‘don’t call me please I am not on my own’ but then the next morning, at 6.03 am, sent a photo of a topless woman wearing just underpants.

He later texted MJ, saying ‘are you playing with yourself … you were amazing in the shower’ and praising her ‘amazing body’. 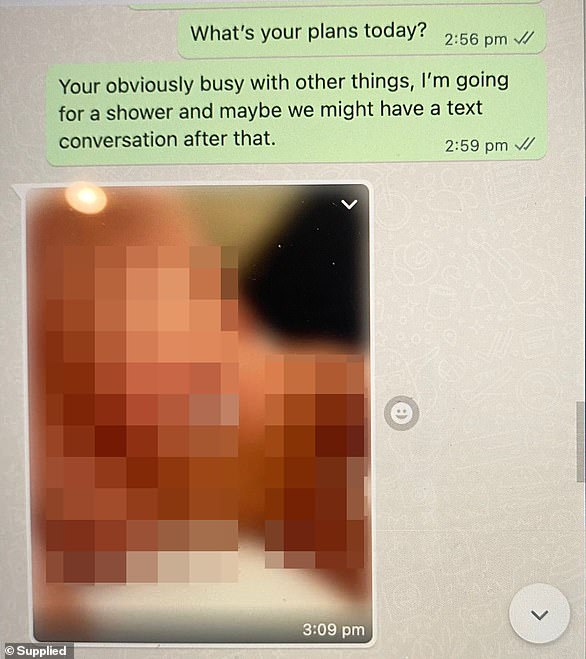 The Hong Kong cricket team coached by Johnston finished unbeaten in the Asia Cup qualifiers in Al Amerat, Oman between August 21 and 25, beating Singapore, Kuwait and the UAE.

O the evening after an encounter with a woman in his room, Mr Johnston’s team lost by 40 runs to cricketing giant India at Dubai International Stadium.

Johnston flew back to Sydney the next day and was initially warmly greeted by Joanne Bell, his second wife, the couple having married in 2019, in Hong Kong. 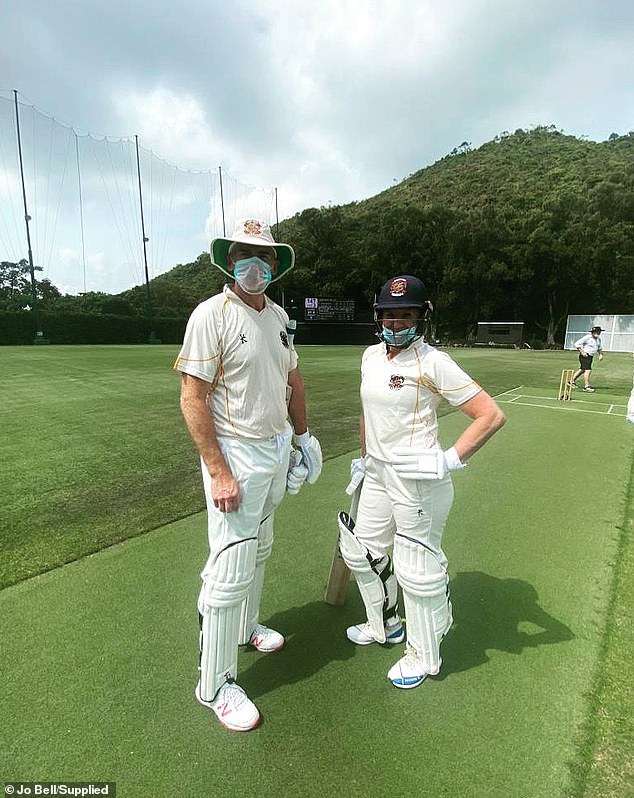 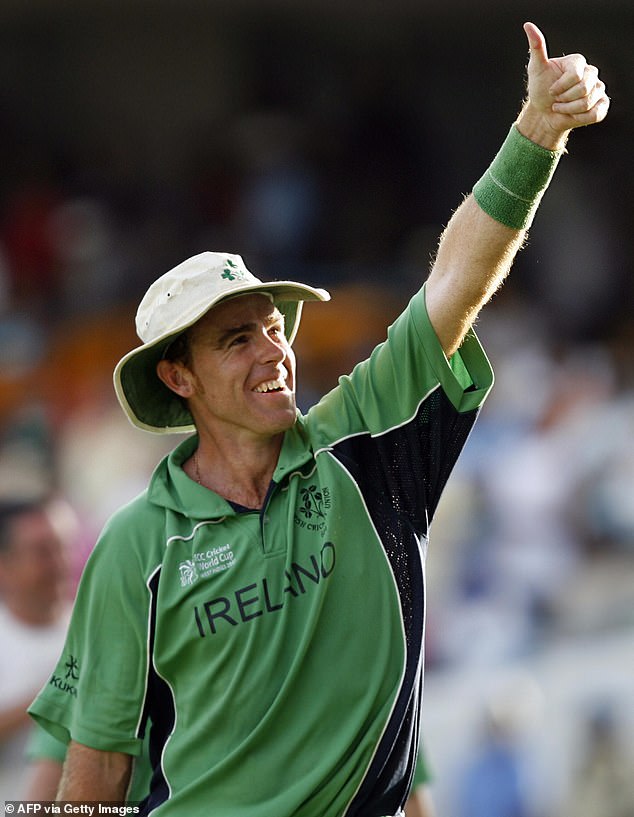 When Joanne Bell challenged her husband Trent Johnston (above, as Ireland international captain) he told her he had only shared drinks with two women in Dubai and that there was no sex 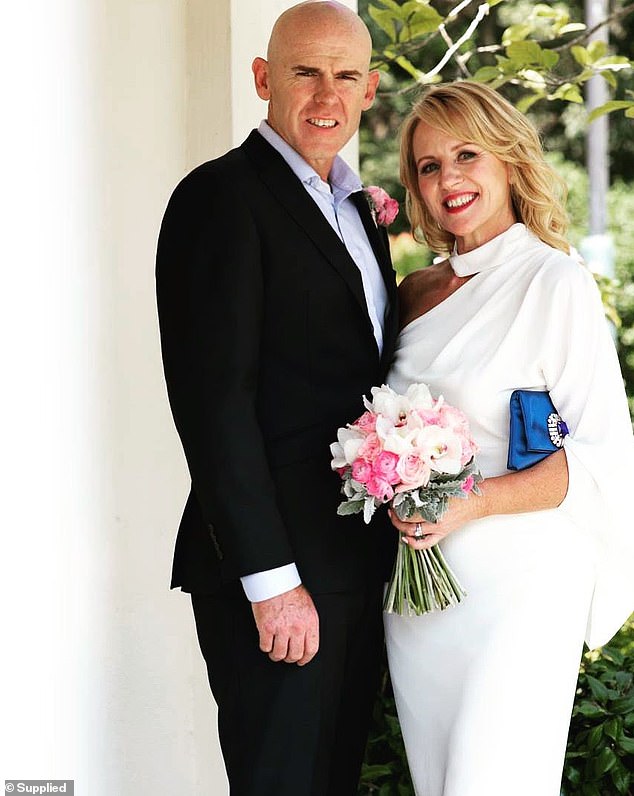 1995: Johnston first played club cricket in Ireland in 1995 and met his first wife Vanessa, with whom he had two children.

1999: First class debut as a batsman and fast bowler for NSW, in a Sheffield Shield match against Tasmania in which Johnston and Brett Lee opened the bowling.

2000: After breaking his arm in that debut match, Johnson’s career stalled but he played Pura Cup for NSW.

2005: Became captain of the Ireland side.

2014: He returned to Australia to coach the NSW Blues and Sydney Sixers and remained as coach for three years.

2022: Toured Zimbabwe with his Hong Kong side for the World T20 qualifiers, entered a training camp in Kent, UK and competed at the Asia Cup in Dubai.