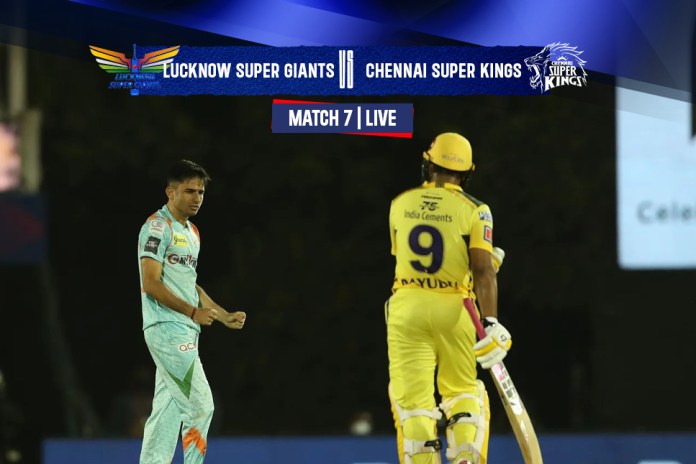 Chennai Super Kings made gutsy changes but it didn’t matter much. Robin Uthappa who replaced Devon Conway in opening, brought up a quickfire 25-ball 50 to set the stage alight for Chennai. He was well supported by Moeen Ali (35 off 22), who came in after Ruturaj’s wicket as CSK brought up 100 runs inside 10 overs. After his wicket, Shivam Dube took charge, smashing 30-ball 49 to keep the scorecard ticking.

Over 20: Andrew Tye back in attack

Over 19: Avesh Khan back in attack

Over 17: Ravi Bishnoi back in attack

Over 15: Andrew Tye back in attack for 15th over

Over 14: Krunal Pandya back in attack

Over 13: Deepak Hooda comes into attack

Over 11: Avesh Khan back in attack

Over 8: Ravi Bishnoi comes in

Over 7: Chameera back in attack

Over 6: Krunal Pandya comes into the attack

Over 4: Change of ends for Avesh Khan

Over 3: Change in bowling, Andre Tye comes in

Over 2: Dushmantha Chameera comes into attack

Over 1: Avesh Khan begins for LSG

Earlier, Ravindra Jadeja’s luck did not change at the toss. KL Rahul won the toss and opted to bat first on a lively Brabourne pitch. CSK made as many as three changes with Moeen Ali coming in while LSG made one change with Andrew Tye replacing Mohsin Khan.

As for Playing XI, CSK decided to go with three overseas players. Moeen Ali came in while LSG made just one change with Andrew Tye coming in. The biggest omission is Devon Conway as Robin Uthappa is all set to open with Ruturaj Gaikwad.

LSG Playing XI: Andrew Tye is all set for LSG debut. He got his cap from KL Rahul.

Pitch report: Grass on pitch and that could change things. Hello and welcome from the Brabourne Stadium 👋@LucknowIPL take on @ChennaiIPL in Match 7️⃣ of the #TATAIPL. 👏 👏

Who among the two will register their first victory of the season tonight❓#LSGvCSK pic.twitter.com/8Z5XmyuMV8