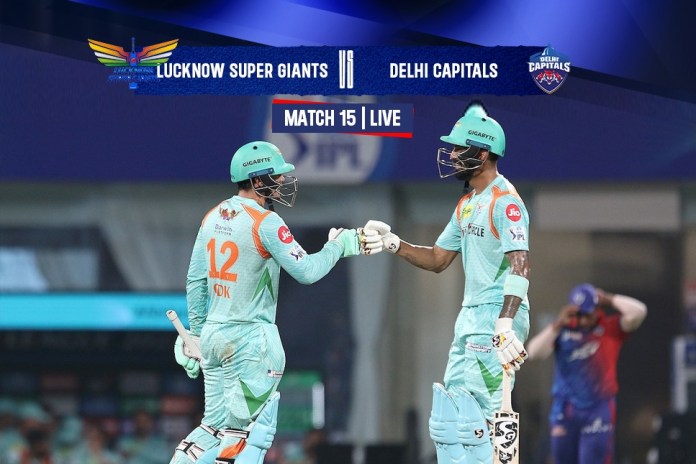 LSG vs DC LIVE Score – Lucknow Super Giants vs Delhi Capitals – Prithvi Shaw scored a stunning half-century as Delhi Capitals put on a sub-apr 149/3 on board in their 20 overs. Put into bat by LSG captain KL Rahul, Shaw got Delhi off to a flyer but the rest of the batters couldn’t manage to exploit the conditions as spinners Ravi Bishnoi and Krishnappa Gowtham kept things tight. Rishabh Pant and Sarfaraz built a strong partnership in the middle overs but the final flourish never came as DC settled for a low total. Follow IPL 2022 LIVE updates & LSG vs DC LIVE Updates with Insidesport.IN

5th over: Anrich Nortje into the attack

4th over: Lalit to continue

3rd over: Shardul Thakur into the attack

2nd over: Lalit Yadav to open from the other end

1st over: Mustafizur Rahman to open the attack

Lowest 1st inngs totals 3 or fewer wkts down in IPL

– DC has never successfully defended a total under 150 in the history of IPL.

18th over: Jason Holder returns to the attack

17th over: Avesh Khan into the attack

15th over: Ravi Bishnoi to bowl his final over

Sarfaraz Khan has kept the scoreboard ticking. Pant meanwhile has struggled against spin.

14th over: Andrew Tye back into the attack

13th over: Krunal Pandya returns to the attack

12th over: Gowtham to bowl his final over

10th over: Gowtham to continue

Two wickets fall in quick succession and the #DelhiCapitals openers are back in the hut.

K Gowtham and Ravi Bishnoi pick the wickets of Shaw and Warner.

9th over: Bishnoi back into the attack

8th over: Gowtham returns to the attack

7th over: Krunal Pandya into the attack

Prithvi Shaw is on a roll here.

A quick fire 50-run partnership comes up between the #DelhiCapitals openers.

6th over: Andrew Tye into the attack

5th over: Ravi Bishnoi into the attack

4th over: Avesh Khan into the attack

3rd over: Holder to continue

2nd over: Krishnappa Gowtham to bowl from the other end

1st over: Jason Holder to open the bowling.

STAT ALERT: Of the four matches at the venue so far, the batting first and chasing sides have won two each. The Average 1st innings score at the venue this year is 174

A look at the Playing XI for #LSGvDC

@18:55 – Graeme Swann gives his pitch report – “One side of the ground is a bit short, in the 60s while the other side is a bigger hit, in the 70s. It’s a huge boundary that side. The wicket looks pretty good, there is a good covering of grass and it’s an even spread of grass. But that has been the case earlier too and the average score has been in the 170s. I’ll be interested too see how much spin there will be in the pitch. Spinners will want to bowl straight and attack the stumps. Looks a very good pitch.”

@18:45 – David Warner, Sarfaraz Khan set to make their debut having received their caps before the game.

LSG vs DC LIVE Updates – Rahul vs Rishabh Pant LIVE: Rahul and Pant, both match-winners in their own rights even with the bat, will like to seize the initiative in these early rounds. IPL is a great platform where a good exhibition of meticulous homework, informed decision making with a dash of punt at critical junctures will hold any leader in good stead.

India will be playing a lot of cricket in next few years and with national captain Rohit Sharma’s workload management is paramount, Rahul and Pant will both like to make a strong case for themselves going into the future.

And hence, the availability of the dashing David Warner for Capitals and the dependable Marcus Stoinis for LSG will certainly add to the depth of the playing XIs and bolster the competitive edge.

It is expected that Tim Seifert will make way for Warner in the Capitals line-up while all-rounder Stoinis, who was picked by Lucknow from the draft might replace one among Andrew Tye or Evin Lewis. As of now, replacing Tye looks more imminent.

Both teams have had issues with their bowling but Lucknow under Gautam Gambhir’s mentorship, has managed pretty well. The addition of Jason Holder has made them stronger and Delhi will be hoping that Warner gives them a rollicking start alongside mercurial Prithvi Shaw.

In case of LSG, skipper Rahul two good knocks against CSK and Sunrisers Hyderabad would like that Quinton de Kock also repeats his performance against CSK. However it is LSG’s bowling that needs to stop DC’s batting firepower which will grow manifold in Waner’s presence and skipper Pant and Shaw also waiting for their big knocks.

While Lalit Yadav is growing in confidence with each passing game, it is veteran batter Mandeep Singh, who is the weakest link in the batting line-up. The way Mandeep backed towards leg-stump to deliveries from Lockie Ferguson and even Hardik Pandya, didn’t make a pleasant sight.

However with LSG’s attack not having an express quick in absence of Mark Wood, Pant and coach Ricky Ponting might be tempted to give the former Punjab captain one more chance.
In case, he doesn’t get it then the three available options are Kona Bharat, Sarfaraz Khan and Yash Dhull. Sarfaraz was in great form during first-class season while Bharat did well for RCB last year in the few chances that he got.

In case Lucknow, Manish Pandey has looked horribly out of touch but Gambhir is known to back his players which could well save him from getting the axe. Also there is no denying that LSG’s bench strength when it comes to Indian batting back-up isn’t great.

The two available players are Manan Vohra, who even after a decade in IPL, has failed to deliver and there is Uttar Pradesh white-ball captain Karan Sharma, who isn’t exactly a finished product.