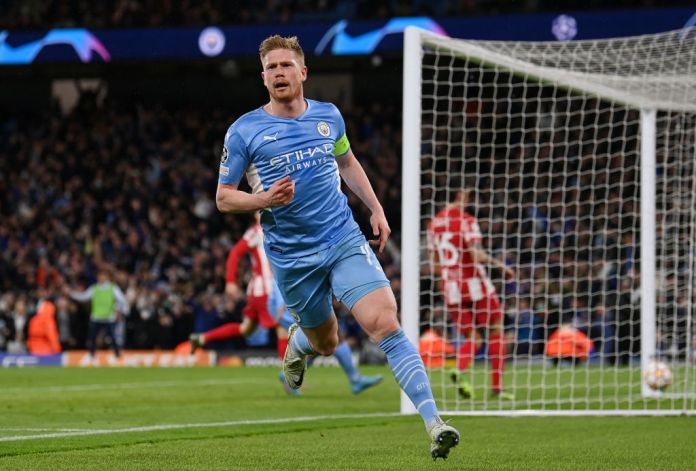 Manchester City beat Athletico 1-0: It was one-way traffic at the Etihad during the opening 45 minutes with the hosts eager to make their presence known. It was Pep’s substitution tactics that eventually made the difference when Phil Foden’s first touch of the ball set up De Bruyne for the match-winner after only being on the pitch for 80 seconds.

Atletico failed to register a single attempt against Man City.

Kevin De Bruyne was the hero as Manchester City overcame Atletico Madrid 1-0 in their Champions League quarter-final first leg at the Etihad Stadium. The Belgium international struck the only goal 20 minutes from time to hand Pep Guardiola’s side a narrow advantage heading into the second leg at the Wanda Metropolitano next week.

Manchester City beat Atletico Madrid 1-0: Atletico had frustrated the Premier League leaders for large periods of the contest on Tuesday with a typically stubborn defensive display. However, their resistance was finally broken when De Bruyne latched onto Phil Foden’s precise throughball, before sliding past Jan Oblak.

City failed to register a single shot on target from six attempts in the first half, with Atletico also making important blocks to deny Joao Cancelo and De Bruyne. Ilkay Gundogan almost unlocked the Atleti defence, but the skipper was just unable to get Riyad Mahrez’s inviting cross under control.

City continued to carry the greater threat after the restart; Oblak getting down well to keep out De Bruyne’s free-kick, while Aymeric Laporte headed over from a Mahrez corner. Guardiola introduced Jack Grealish, Gabriel Jesus and Foden in a bid to find an elusive opening goal.

And the latter made an impact within two minutes of stepping onto the field; producing a perfectly timed pass for De Bruyne, who finished clinically with his right foot from inside the penalty area.

What does it mean? Advantage City
Manchester City recorded their 15th victory from 23 non-group stage matches under Guardiola. The first side to face both City and Manchester United in the knockout stages of European competition since Juventus in the 1976-77 UEFA Cup, Atletico saw their six-game winning streak come to an end.

What’s next?
The two sides renew their rivalry in the second leg at Wanda Metropolitano next Wednesday. Before that, City welcome Liverpool on Sunday for what could be a crucial clash in the Premier League title race – the day after Atletico travel to Mallorca in LaLiga.