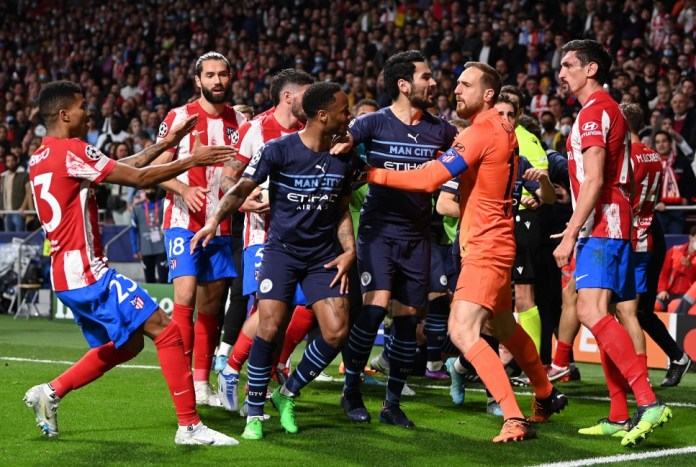 UEFA Champions League Quarterfinal: Man City vs Real Madrid, 10-men Atletico Madrid DUMPED OUT by Manchester City: Manchester City sealed their place in the Champions League semi-finals after an ill-tempered 0-0 draw with Atletico Madrid in their 2nd leg clash. Kevin De Bruyne’s solitary goal in the first leg last week gave Pep Guardiola’s side a slender lead to take to the Wanda Metropolitano. Diego Simeone’s men put them under intense pressure in the second half, but City held firm before tempers flared late on and Felipe saw red. Follow InsideSport.IN for the latest sports news.

The first clear sight of goal for either side came on the half-hour mark when Ilkay Gundogan struck the base of Jan Oblak’s right-hand post from eight yards after being teed up by Phil Foden.

City, coming into the game on the back of a thrilling 2-2 draw with title rivals Liverpool, looked the more likely to score throughout the first half, yet they went in at the break having failed to hit the target with any of their eight shots.

The hosts were much improved at the start of the second period and Antoine Griezmann flashed a dipping effort past the post from the edge of the penalty area shortly before the hour.

There was a melee after Felipe’s late challenge on Foden in the closing stages, with both sets of players clashing near the corner flag.

The end result was a second yellow card for the Atleti defender as the home side’s Champions League campaign ended on a sour note, with Simeone himself booked in stoppage time after stepping onto the pitch.

Man City made to work for semi-final spot

City dominated the first half, taking eight shots to Atleti’s one, but Guardiola’s men wilted in the second period and registered just two shots on goal.

The LaLiga side can perhaps consider themselves unlucky not to force extra time after a spirited second-half display, yet the reality is they have now failed to win any of their past eight home games in the Champions League.

The big games keep coming for City as they face Liverpool for the second time in a week in the semi-finals of the FA Cup on Saturday. Atletico are next in action against Espanyol on home soil in LaLiga on Sunday.