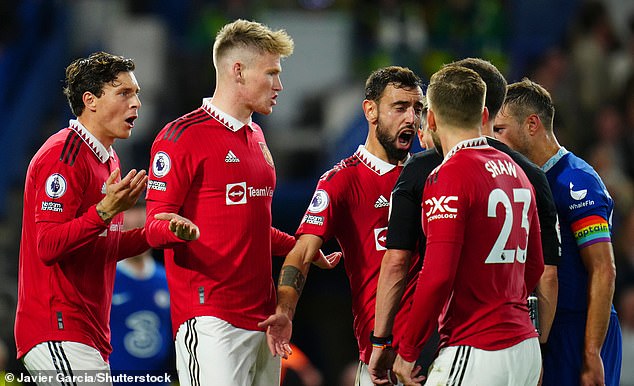 Manchester United are hit with ANOTHER FA charge for failing to control their players against Chelsea, just a week after being reprimanded for a similar incident during frustrating 0-0 draw at home to Newcastle

Manchester United have been handed yet another FA charge for failing to control their players during Saturday’s 1-1 draw with Chelsea, less than a week after receiving the same punishment against Newcastle.

The FA released the following statement on Wednesday: ‘Manchester United FC has been charged with a breach of FA Rule E20.1 after its fixture versus Chelsea FC on Saturday 22 October 2022 in the Premier League.

‘Manchester United allegedly failed to ensure that its players conducted themselves in an orderly fashion in the 84th minute, and the club has until Friday 28 October 2022 to provide a response.’