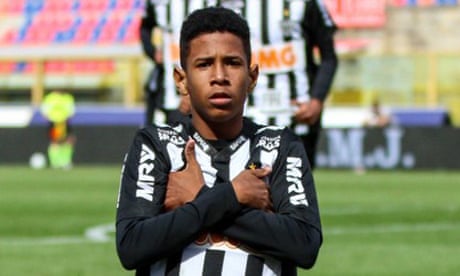 Manchester City are close to signing the 17-year-old Brazilian winger Sávio from Atlético Mineiro. A medical has been scheduled after talks reached their final stages over a deal for City to pay €6.5m (£5.5m) plus add-ons and commit to a sell-on clause.

Paperwork to complete the transfer is due to be prepared soon. Arsenal and the Red Bull group, whose stable of clubs includes RB Leipzig and RB Salzburg, were also interested in Sávio but City accelerated their pursuit of the Brazil youth international in the hope of winning the race to sign him.

Sávio, who made his Atlético debut in September 2020, could be loaned to PSV Eindhoven next season if, as expected, City conclude a deal. With the Premier League transfer window shut, he will stay with Atlético over the coming months.

City struck a similar deal to buy another teenage Brazilian forward, Kayky, from Fluminense last April. He joined last summer and has made brief appearances in the FA Cup and Premier League.