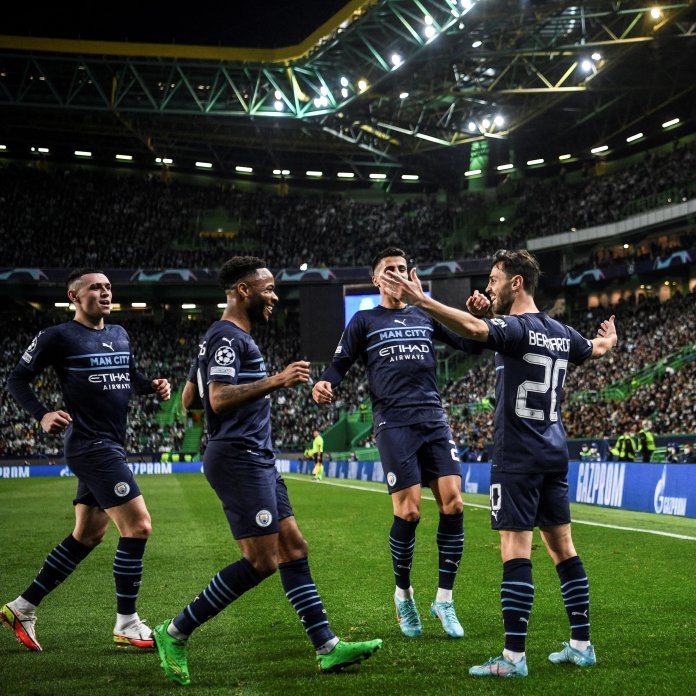 UEFA Champions League LIVE – Manchester City beat Sporting 5-0: A five-star performance from Manchester City means they are as close as possible to the last eight of the Champions League. The result equals the biggest winning margin in an away match in the Champions League knockout phase. It also gives City their joint biggest European away victory, level with the 5-0 win at Steaua Bucharest in the play-off round of this competition in 2016-17. Follow InsideSport.IN for the latest sports news and updates.

The reigning Premier League champions were far too good for Sporting, and they proved that after scoring four goals inside the first 45 minutes.

Mahrez scored the opener after a VAR check ruled in his favour before Bernardo scored the first of his two goals thanks to a piledriver from inside the penalty box. Foden then tapped in Mahrez’s cross to make it three before Bernardo grabbed his second when his shot was deflected into the back of the net.

City did not let up in the second half, and Bernardo was denied his hat-trick after being flagged offside. Sterling scored the best goal of the night as his stunning drive from outside the box sailed into the top corner, and it was a night to savour for the travelling City fans.

4 – @ManCity are the first team in #UCL history to lead an away game by 4+ goals at half-time in the knockout stages of the competition. Rout. #SPOMCI

City have sent a message with this result tonight, and if anyone doubted their credentials to win the competition, they might have to think twice. Yes, Sporting were unlikely to progress much further in the Champions League, but they were made to look very ordinary tonight after a majestic display.

Manchester City have at least one foot in the quarter-finals after a comprehensive victory in Lisbon. Scorers: Mahrez 7′, Bernardo Silva 17′, 44′, Foden 32′, Sterling 58′ City took the lead in Lisbon when Phil Foden’s initial effort was saved by the goalkeeper and Kevin De Bruyne teed up Riyad Mahrez for a tap-in.

The flag initially went up for offside but after a long VAR check, the goal was given. It was soon 2-0, when the ball dropped to Bernardo Silva from a corner and he rattled in a brilliant half-volley in off the crossbar. Just when it looked like Sporting were starting to threaten, City went 3-0 up. The defenders stood off Mahrez and let him cross in from the left, and the ball somehow made its way to Foden to finish with ease.

City’s first half dominance didn’t end there and just before half-time they went 4-0 up, when Bernardo Silva netted his second of the game, this one coming with the aid of a deflection. Into the second half and Bernardo had a hat-trick goal ruled out for offside, before Raheem Sterling did make it 5-0 with an unstoppable long-range golazo into the top corner.