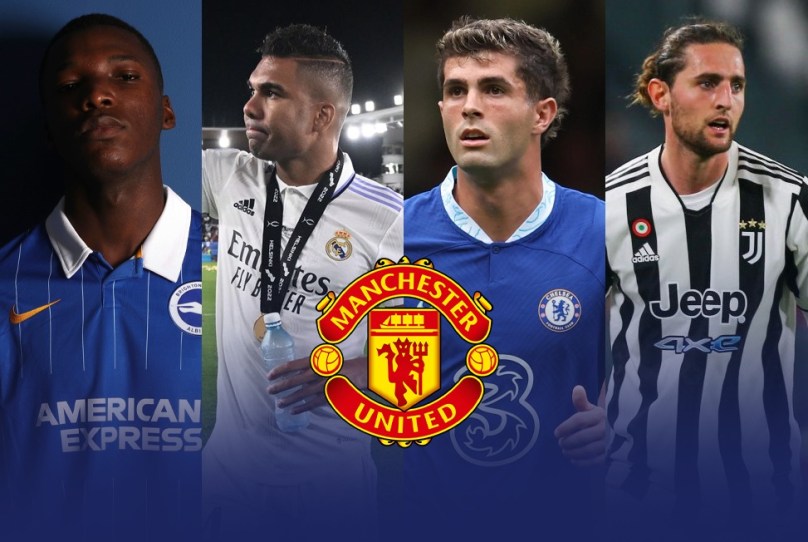 Man United latest transfers: Manchester United latest transfer updates – United have called off a deal for Adrien Rabiot in the wake of his ridiculous wage demands, while a deal for Frenkie de Jong continues to look unlikely. Casemiro has emerged as a shock target for Erik ten Hag’s side with Cristiano Ronaldo’s future continuing to be a talking point. Follow Premier League 2022-23 LIVE updates and news on InsideSport.IN

🗞 Newcastle, Juventus and Atletico Madrid have all made approaches for Christian Pulisic. The player would prefer #mufc. Chelsea know the player is frustrated and are willing to listen to loan offers. [@andymitten]

Man Utd are looking to make a loan move for Chelsea’s Christian Pulisic, reports the Athletic. The American has struggled for regular minutes in west London and would consider a move to Manchester, where they are desperate for new recruits.

According to De Telegraaf, Antony is believed to ‘no longer be an option for Manchester United’ and that the forward would now ‘think twice’ if he was presented with the opportunity to work alongside Ten Hag in England following United’s nightmare start to the season.

With just two weeks left of the summer transfer window, Manchester United just don’t look as though they will get a deal over the line for Barcelona midfielder Frenkie de Jong and, as a result, alternatives are being considered as they desperately aim to bolster their ranks.

Real Madrid enforcer Casemiro is being eyed as one of the potential candidates, with the five-time Champions League winner said to be high up on the list for Erik ten Hag this summer, as revealed by Spanish outlet Marca.

Man Utd in for Hakim Ziyech

According to the latest reports, the Red Devils are preparing to swoop for Chelsea maestro Hakim Ziyech.

The Moroccan international has been underwhelming since joining the Blues in the summer of 2020, scoring just 14 goals in two seasons, but could reunite with Erik ten Hag after the pair enjoyed plenty of success together at Ajax.

Nabil Djellit, via L’Equipe, states that United’s board are ‘listening to manager Erik ten Hag on the subject’ and are willing to advance a deal for the winger if Chelsea asking price is within reason

Manchester United have ended their interest in Juventus midfielder Adrien Rabiot – because of his obscene wage demands. United were willing to make France international Rabiot one of their highest-paid players on more than £250,000-a-week, but his agent and mother, Veronique, wanted more.

Against that backdrop, United have pulled the plug on a deal for the 27-year-old, despite having agreed a £15million transfer fee with Juventus for him.

United’s football director, John Murtough, flew out to Turin to try to thrash out a deal for Rabiot, but despite agreeing a fee with Juventus, the player’s salary demands were deemed too high. That has seen United walk away from the deal, with Real Madrid’s Casmiero and RB Leipzig’s Konrad Laimer having emerged as potential alternatives to Rabiot.

Manchester United are considering a move for a Barcelona player and it’s not Frenkie de Jong. According to talkSPORT, United are weighing up a move for Barca right-back Sergino Dest who is valued at around £17million.

Barca are trying to offload unwanted players to free up space on their wage bill and Dest, who worked under Erik ten Hag at Ajax, is one of those they want rid of.

Brighton’s Moises Caicedo is one of the names on Manchester United’s shortlist as they search for a midfielder.

Fabrizio Romano says Caicedo is just one of ‘many’ being considered, with Adrien Rabiot and Matheus Cunha two of the others – alongside, of course, Frenkie de Jong.

Brighton do not want to sell Caicedo, who only arrived from Ecuadorian side Independiente del Valle for £4million in February 2021, and they are known to drive a hard bargain, having made £50m from Ben White’s move to Arsenal last summer and a potential £62.5m from Marc Cucurella’s recent sale to Chelsea.