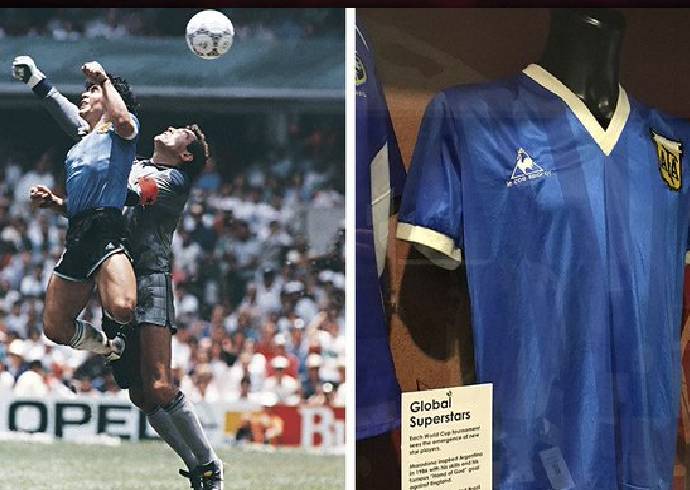 Maradona Jersey Controversy: Diego Maradona’s eldest daughter claims that the Argentina shirt expected to sell for several million dollars when it is sold at auction this month is not the one her late father wore when he scored the infamous “Hand of God” goal against England. Follow Diego Maradona’s Live updates on InsideSport.IN

Dalma Maradona said the shirt due to go under the hammer was actually the one worn by her father during the goalless first half of the 1986 World Cup quarter-final.

Maradona Jersey Controversy: Steve Hodge, the former England player who says Maradona swapped shirts with him at the end of the game in Mexico City, is selling the shirt, which is set to fetch more than £4 million ($5.2 million).

Auctioneers Sotheby’s strongly refuted Dalma Maradona’s claims on Thursday, saying an external company had provided a “conclusive photomatch” that proved it was authentic.

Sotheby’s also noted that Maradona himself had previously acknowledged swapping his shirt with Hodge in the player’s tunnel after their 1986 World Cup classic.

However Dalma Maradona maintains the jersey her father wore in the second half — when he also scored one of the greatest goals in World Cup history — was in the hands of another owner, but declined to name them.

Maradona Jersey Controversy: “It’s not that one. I don’t want to say who has it because it’s crazy. He (Diego Maradona) said it. He said, ‘How am I going to give him the shirt of my life?’” she told reporters.

“This former player thinks he has my dad’s second-half jersey, but it’s a mix-up. He has the one from the first half.

“We wanted to clarify that so that people who want to buy it know the truth,” Dalma said in separate comments to Channel 13 television.

A Sotheby’s spokeswoman told AFP: “There was indeed a different shirt worn by Maradona in the first half, but there are clear differences between that and what was worn during the goals.

“And so, prior to putting this shirt for sale, we did extensive diligence and scientific research on the item to make sure it was the shirt worn by Maradona in the second half for the two goals.”

The photomatching process had involved matching the shirt “to both goals examining unique details on various elements of the item, including the patch, stripes, and numbering.”

It added that Maradona himself had acknowledged the provenance of the shirt himself, in his book “Touched by God,” and he recalls giving it to Hodge at the end of the match.

“On the way to the locker room, one of the English guys – it turned out to be Hodge, but I wasn’t sure at the time – asked me to swap jerseys with him. I said yes and we did,” Maradona wrote in his 2016 memoir about Argentina’s 1986 World Cup triumph.

Hodge, who wrote a 2010 autobiography titled “The Man with Maradona’s Shirt,” paints a similar picture of the exchange.

“Maradona was walking with two of his teammates. I looked him in the eye, tugged on my shirt as if to say ‘any chance of swapping?’, and he came straight across, motioned a prayer, and we exchanged shirts. And that was it. It was just as simple as that,” he said.

The Sotheby’s spokeswoman also noted that the shirt had been a prized exhibit at England’s National Football Museum for the past two decades, “where countless people have seen it.”

“There has never been a claim that it’s not the shirt,” she said.
The online auction is scheduled for April 20 to May 4.

It is not the first time that the authenticity of a football shirt being auctioned has come under scrutiny.

In 2018, a jersey reputedly worn by Zinedine Zidane during France’s 1998 World Cup final victory over Brazil was withdrawn from auction shortly before going under the hammer following doubts over its authenticity.