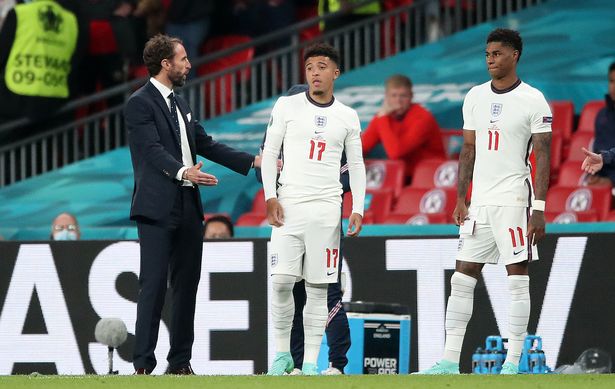 England: Marcus Rashford and Gareth Southgate – Manchester United forward Marcus Rashford who is currently having a difficult spell at the club will have his hopes broken as reports suggest that the England International will be dropped for the two international friendlies against Switzerland and Ivory Coast. While his teammate Jadon Sancho could be recalled to the England camp by Gareth Southgate after putting in splendid performances including his Manchester Derby goal. Follow InsideSport.IN for the latest sports news and updates.

England: Marcus Rashford set to be ‘DROPPED’ by Gareth Southgate for England’s friendlies against Switzerland and Ivory Coast while Jadon Sancho to be recalled

England: Marcus Rashford set to be ‘DROPPED’ by Gareth Southgate

The forward has fallen down the pecking order at club level with Manchester United and has not started a Premier League game since the 1-1 draw with Southampton on February 12. According to ESPN report that he is set to be dropped for England’s friendlies against both Switzerland and the Ivory Coast this month, as his slump in form continues.

The 24-year-old has not worn an England shirt since Euro 2020, when the Three Lions were beaten finalists after Rashford was one of three players to miss a penalty in the shootout with Italy, after undergoing surgery on his shoulder. However, he did score on his return to action during Manchester United’s 4-2 loss to Leicester in October.

It looked as though Rashford had picked up right where he had left off – despite the fact he had not played football since August. Although, it didn’t last long as Rashford found himself falling further down the pecking order under Manchester United manager Ralf Rangnick.

England: England to play friendlies against Switzerland and Ivory Coast

Having scored just five goals in 24 appearances for United, Rangnick decided to put his faith in Anthony Elanga instead. The 19-year-old starlet impressed the interim manager and secured his place in the Manchester United XI for the foreseeable future.

As a result, Rashford has started just two of Manchester United’s last 11 games in all competitions. He has also failed to score in his last seven games for the Red Devils. Therefore Southgate will most likely leave Rashford out of the his England squad for the Three Lions’ upcoming friendlies.

Southgate has previously said he would only select players who are performing consistently for their clubs. Harry Kane, Jack Grealish, Raheem Sterling, Phil Foden and Bukayo Saka are all expected to feature for Southgate against Switzerland and the Ivory Coast.

England: Jadon Sancho to be recalled

Jadon Sancho may receive a recall to the England squad after an upturn in form for Manchester United in recent weeks. West Ham forward Jarrod Bowen is expected to get the nod for his first cap after excelling in the Premier League.

Everton striker Dominic Calvert-Lewin has also returned to full fitness, making himself an option for Southgate. Therefore, ESPN report, there is little space in the England squad for Rashford and he has done little to prove why he should be there.

Additionally, Southgate highlighted the importance of players proving their worth over the coming weeks when speaking about the squad’s World Cup preparations during the FA Cup draw last week.

England: Marcus Rashford set to be ‘DROPPED’ by Gareth Southgate for England’s friendlies against Switzerland and Ivory Coast while Jadon Sancho to be recalled