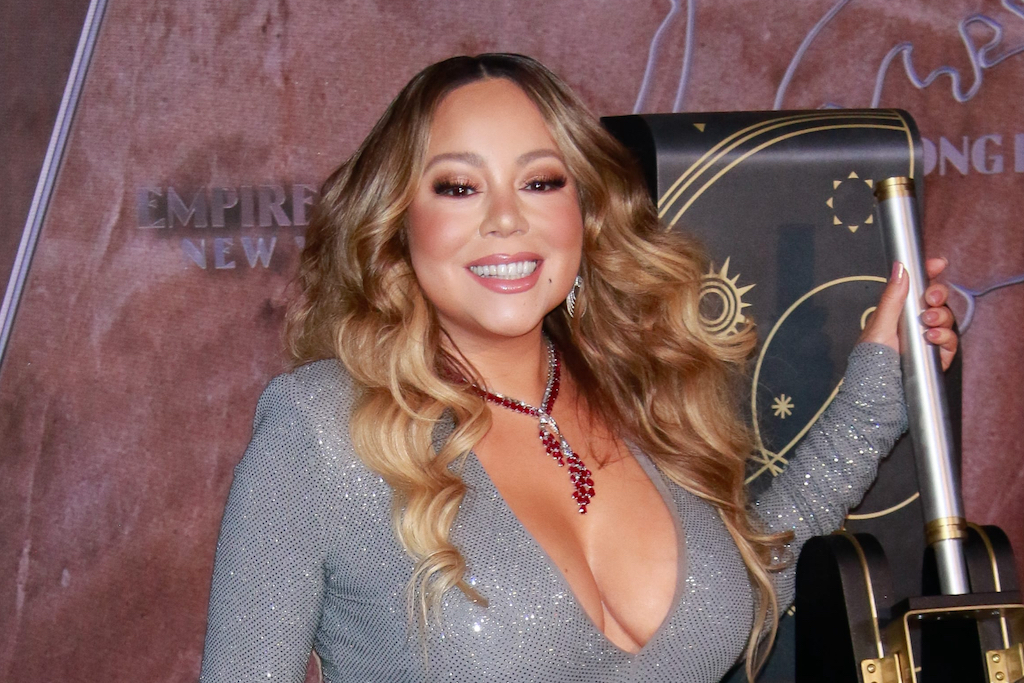 Mariah Carey is never one to skimp on glamour — especially for a special occasion. The legendary musician proved this affinity for a dramatic night-out look ahead of a special screening of “Bros” in Los Angeles. Starring Billy Eichner and Luke Macfarlane, the comedy follows the romantic misadventures of gay men in New York City and notably includes an all-LGBTQIA+ cast.

Before stepping out, Carey shared a video on Instagram where she flipped a circular “Be Nice Or Leave” painted sign, revealing a “Bros” screening poster on the back. Set to her own 1999 “Heartbreaker (Remix),” the star posed with the sign before strutting offscreen in a sequined bodycon minidress over sheer purple tights. The glittering number included a punchy violet hue in a sleeveless silhouette. Adding to the Grammy Award-winning singer’s statement outfit were layered diamond bracelets, as well as a diamond cocktail ring and swinging diamond statement earrings.

Completing the “Emancipation of Mimi” musician’s ensemble was a set of daring peep-toe heels. The style in question included yellow and black reptilian peep-toe openings atop a matching platform sole, accented with small gold beads. Adding a pop of tonal color to the mix was a hint of deep purple suede insoles, as well as matching thin buckled ankle straps. Finishing the star’s pair were thin stiletto heels in the same reptilian texture, totaling at least 5 inches in height to give the singer a slick height boost.

Sky-high heels are a top trend right now, with brands including Steve Madden, Schutz and Casadei releasing numerous block and stiletto-heeled styles with platform soles. The pair’s instant height-boosting effect — as well as support from platform silhouettes and overall dramatic appearance — have been a key driver in its popularity. In addition to Carey, stars including Jennifer Lopez, Nicky Hilton and Dove Cameron have worn towering Gucci, Valentino and Giuseppe Zanotti heels in recent weeks as well.

Carey is a longtime fan of height-boosting high heels, having worn numerous pairs over the years from top designers, including Christian Louboutin.

When it comes to shoes, Carey’s penchant for glamour remains unmatched. The singer often opts to wear stiletto-heeled sandals and pumps on and off the red carpet from top brands, including Aquazzura, Sophia Webster, Jimmy Choo and Alaïa. These often include statement-making elements like metallic tones, crystals and bright colors. Aside from her heels, Carey also favors Ugg boots while off-duty. The singer’s love for shoes runs deep, as she owns an extensive collection and launched her own namesake line with HSN in 2010.

Discover Carey’s most high-wattage concert looks over the years in the gallery.