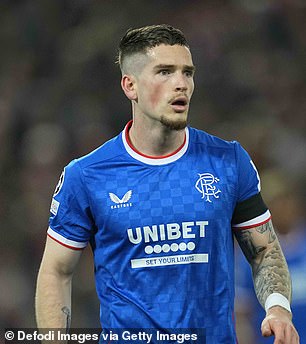 This was once the dream for Ryan Kent and Ben Davies. A big night at Anfield. In Europe’s elite competition. Stepping out under the lights with a chance to shine.

Neither fulfilled it in red, yet here they were in blue. Playing against their former club with whom first-team breakthroughs had remained elusive.

An intriguing sub-plot was added to the story of a first-ever competitive meeting between Liverpool and Rangers. But forget the notion of a fairytale conclusion. 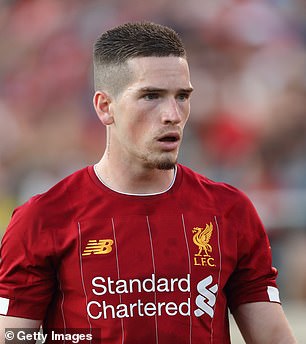 Football doesn’t work like that at Champions League level. And certainly not against an English superpower with an urgent need to prove a point.

Back at the ground of past aspirations, there was only suffering for Davies and Kent. As there was for all their current colleagues. But for the brilliance of Allan McGregor, the scoreline could easily have escalated beyond its respectable final tally.

Something will have to change profoundly for the outcome to alter in the return in Glasgow next week. Three games in and Rangers have yet to score in Group A. They didn’t come close to doing so last night until the final five minutes, when substitutions made an impact.

Prior to that, Giovanni van Bronckhorst’s set-up neither parked the bus effectively nor took the fight to hugely gifted opponents. It was all a little bit in-between. Ibrox will demand more intensity. 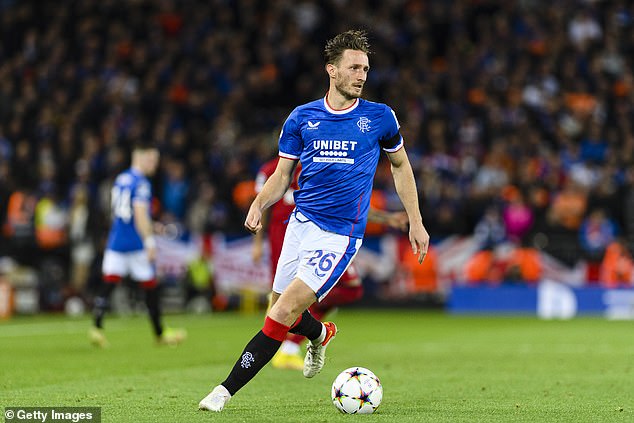 Nothing in the power of Davies or Kent could alter the inevitable flow of this game. The defender conceded the free-kick that led to Trent Alexander-Arnold’s sensational opener but also made some decent blocks. For the winger, there were occasional nice touches, some thwarted runs and a few misplaced passes. No fear was struck into Alexander-Arnold, Joel Matip or Virgil van Dijk.

These were not the Anfield memories Kent or Davies wanted to create. But at least they can now say they have played meaningful football inside this great theatre of the game. 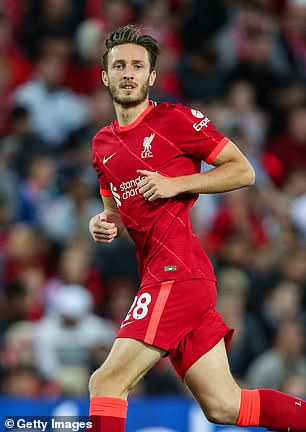 Kent joined Liverpool aged seven, progressing through the ranks during 14 years on their books. Earning professional contracts while many of his contemporaries failed to do so, his solitary senior outing came in an FA Cup tie at St James Park. The one in Exeter, not Newcastle.

That was still more than Davies managed during 17 months at Anfield. His signing by Jurgen Klopp in February 2021 remains a curiosity. Stuck on the bench after moving from Preston North End, the centre-back spent last season on loan at Sheffield United before signing for Rangers in a deal worth up to £4million.

Three months after leaving Liverpool, he finally made his Anfield debut. It’s a funny old game right enough. Or at least it was until the Liverpool team-sheet was released. 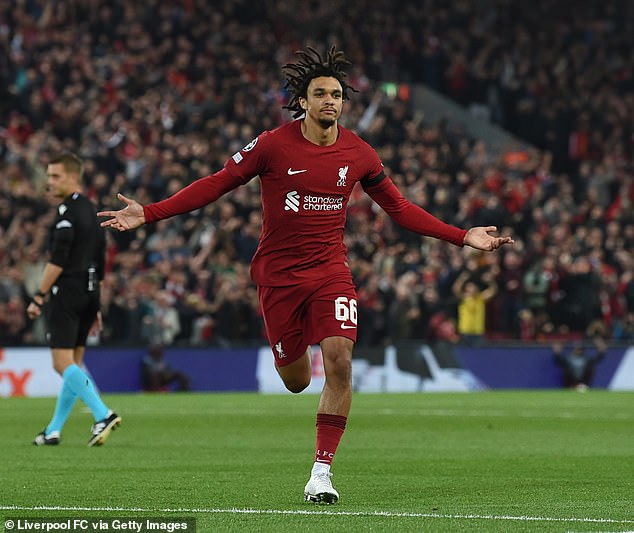 Jurgen Klopp’s selection was ultra-attacking, with a tweak of formation and four forward players. Mo Salah, Diogo Jota, Luis Diaz and Darwin Nunez. Most Champions League teams would be happy to include one of those names.

It was a case of Liverpool lining up the big guns. And taking aim.

Nabbed pitch-side by BT Sport over an hour before kick-off, Davies addressed his familiarity with the immense quality of the opposition.

‘I used to see each day working with them that they were world class players,’ he said. ‘But it’s the Champions League so any team you come up against are going to be really good. 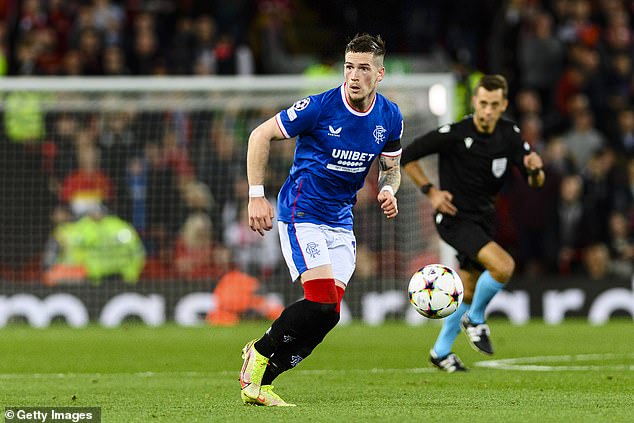 ‘We need to have our best game possible and hope maybe Liverpool have a bit of an off day.’

After leaking points in five of seven English Premier League games to date – and being thumped by Napoli in Europe – Klopp was determined to recapture confidence with a dominant display. For all the discussion of Liverpool’s recent defensive frailties, the possibility of an almighty backlash loomed large.

Rangers knew Nunez, of course. Two years ago, he stepped off the bench for Benfica to change the course of a Europa League match, scoring a last-gasp equaliser in a 3-3 draw.

It took barely two minutes for him to remind of his threat last night. A firm snapshot was repelled by McGregor as Liverpool sought an early breakthrough.

Rangers struggled in the game, but goalkeeper Allan McGregor had an excellent game

When Davies then dived in to foul Nunez, it arrived on seven minutes. A conference between a quartet of Liverpool players ended with Alexander-Arnold dispatching a magnificent right-foot free-kick into the top corner of the net.

One down early, Rangers couldn’t concede again before the break. Thanks to McGregor’s excellence, they didn’t.

Davies made one terrific interception and had to be constantly alert to the numerous dangers swirling around him. The space between Davies and Connor Goldson was a channel Nunez looked to exploit in his personal battle with McGregor.

For Kent, getting sufficient touches of the ball was a challenge in itself. He briefly sparkled with a lovely spin away from Jordan Henderson before being felled by Alexander-Arnold. When James Tavernier’s free-kick hit the wall, Kent blazed the rebound high over the bar.

Rangers needed more. Going with the outside of his foot, Kent over-hit a pass to Borna Barisic on a rare over-lapping run. Then the winger coughed up easy possession to allow another Liverpool break.

Like so many of his team-mates, an absence of composure undermined key moments. The Ibrox side found it so difficult to engage as Liverpool popped the ball around. A midfield pairing of Steven Davis and John Lundstram was reduced to chasing shadows.

With little resistance in front, playing five at the back – including teenager Leon King – wasn’t leading to much protection for McGregor. Klopp’s forwards kept finding gaps.

One appeared at the other end early in the second half when Davis won possession. He played in Kent but the cross was too far in front of Alfredo Morelos. More frustration. And it soon deepened.

After Kent was blocked out, Liverpool advanced and Luis Diaz took over with a typically direct run. As he got beyond King, the 18-year-old stretched out a leg and didn’t reach the ball. Down went the Colombian. In went the penalty from Salah.

Kent and Davies were replaced in unison with nine minutes remaining. Their evening was done. So was the scoring.