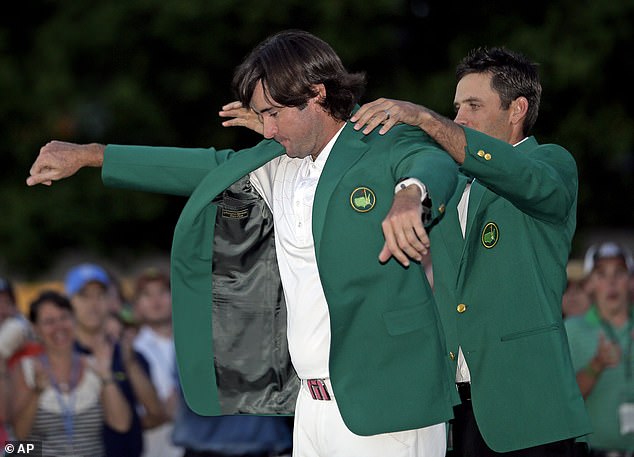 The Masters does not shy away from providing iconic flashbulb moments but Louis Oosthuizen and Bubba Watson truly put on a show as they battled for the green jacket in 2012.

The South African and the lefty produced two of the most memorable shots in Masters history and 10 years later Augusta patrons are still talking about them.

The pair ended up embroiled in a two-hole sudden death playoff but even Oosthuizen’s albatross and Watson’s escape from the woods can hardly encapsulate this tournament.

Their shots may be the headstones on the 2012 Masters but all the other little moments added up to make the tournament the sporting spectacular it is.

For once, 2012 wasn’t the Tiger Woods or Phil Mickelson show – although the latter did play a role.

When the sun set on Augusta National, it was swashbuckling Watson dressed head-to-toe in white with his bright pink driver who slipped on the green jacket but Bo Van Pelt’s miracle final round, Mickelson’s costly blunder and only the fourth albatross in Masters history must not be overlooked.

10 years on, Sportsmail looks back on the memorable moments from the 2012 Masters. 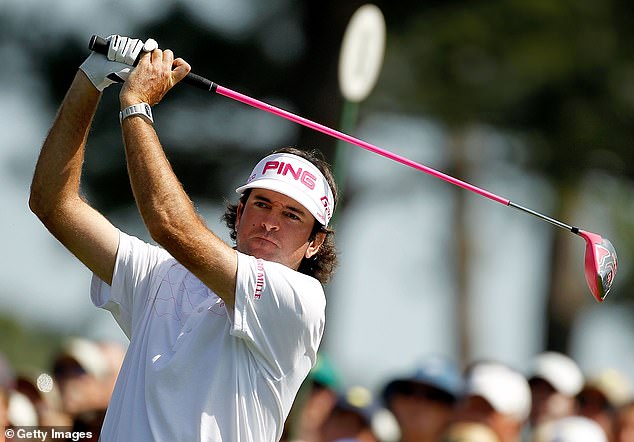 It was a thrill-a-minute Sunday at Augusta in 2012 and it was only fitting that it finished off in the most dramatic of fashions – a sudden death playoff.

Louis Oosthuizen had played himself into the lead early into his round – just two holes in – and remained at the head of the pack throughout the afternoon.

Meanwhile, Bubba Watson appeared to have stumbled on the infamous 12th  and had seemingly dropped out of the race with a bogey but there was chirping around Augusta on the next four holes. 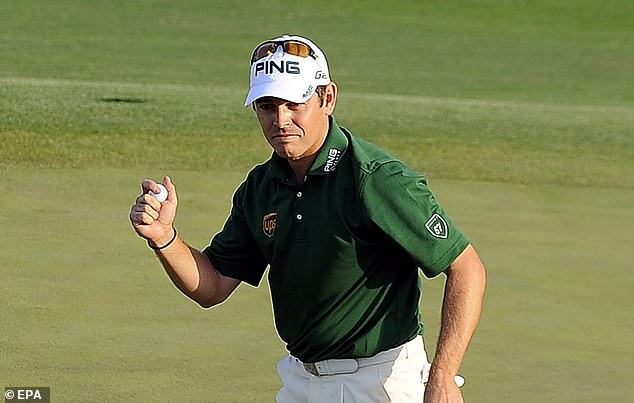 He bounced back with a string of four consecutive birdies and after cleaning up on 16 caught up with Oosthuizen.

Lee Westwood almost joined them after a run of three birdies but the last was a painful one. The Englishman had an eight-foot eagle putt on 18 to tie the lead but missed.

Ultimately it was the South African and the American who headed back down the 18th to clinch the green jacket but neither could seal the deal.

Both players had a good look at birdie but tied the hole to take the playoff to the 10th.

After trading pars on the first extra hole, the lefty stepped onto the 10th tee and produced a howler as he sent his drive well right and tree-bound. Advantage Oosthuizen. 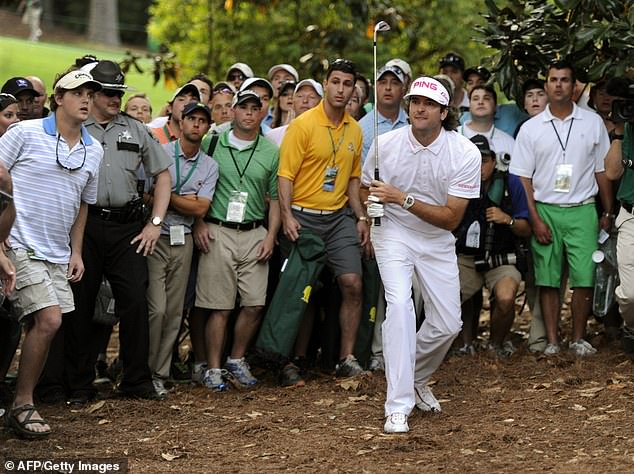 But what followed was a crucial moment in Masters history.

Oosthuizen’s approach, a five iron, was just short of the green but not in any trouble. Meanwhile, Watson appeared to be handling nothing but trouble.

Then came that infamous shot. Through the narrowest of gaps Bubba pulled off the greatest hook of all time.

Oosthuizen, who had a shaky pitch onto the green, tapped in for bogey, leaving Watson two putts for the par and the win.

Watson broke down into a flood of tears as he hugged his caddie and mother on the 10th green. 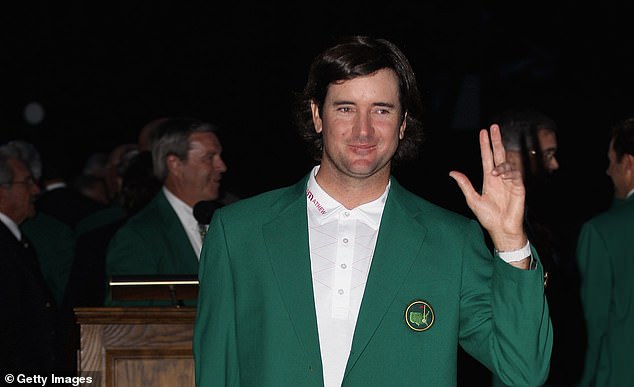 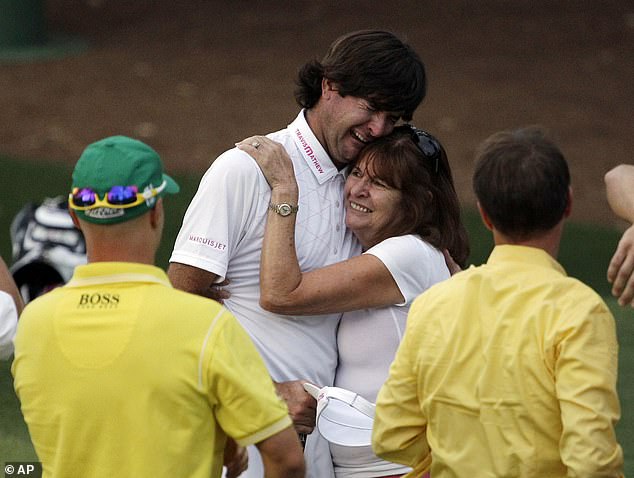 If you had asked anyone after the 10th-hole tee shots what Watson’s chances of victory were, they would have answered none.

But Bubba Watson always has a different perspective on his odds.

‘Before I even got to my ball, I was already looking at the gap,’ Watson said afterward at the champion’s press conference.

The so-called ‘gap’ was a narrow corridor formed by patrons on either side and did, in fairness, provide a window. Slight problem, it pointed miles left of the green.

Stuck in the pine with no view of the green, any other golfer would be feeling far from hopeful. 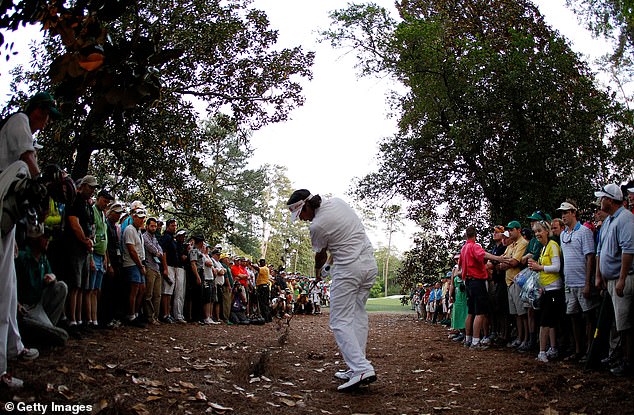 Even CBS analyst Nick Faldo, who, when asked on the broadcast if Watson had a chance to put the shot anywhere close to the green, replied: ‘I doubt it, to be honest.’

But Watson with his ever glass-half-full mentality produced a shot straight out of the Bubba textbook.

With 134 yards to the front of the green, he took out his gap-wedge, hooded the clubface, closed his stance and swung as hard as he possibly could from inside out.

Watson, his caddie and the spectators all rushed forward to see the shot curve to find the front edge of the green and keep rolling to about 10 feet from the pin.

Watson earned his first of two Masters victories to date, fashioned by one of the most masterly shots ever struck.

Oosthuizen chirps into the lead

Oosthuizen shot himself into contention on the second hole as he holed his second shot on the par-five second.

He stroked a shot from the middle of the fairway about 260 yards and landed it on the edge of the green.

It looked good. Very good indeed. And only kept getting better as it rolled the entire length of the green, curling closer and closer to the hole before dropping into the hole. 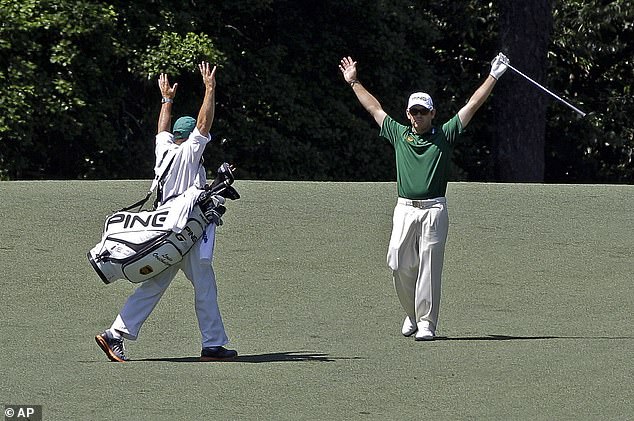 There have been only three other albatrosses in Masters history – and Oosthuizen’s made it into the history books as the first on the second.

The South African’s celebrations were rather subdued as he simply turned to high-five his caddie but iconically missed.

How you can find the hole from 260 yards out but miss a high five? 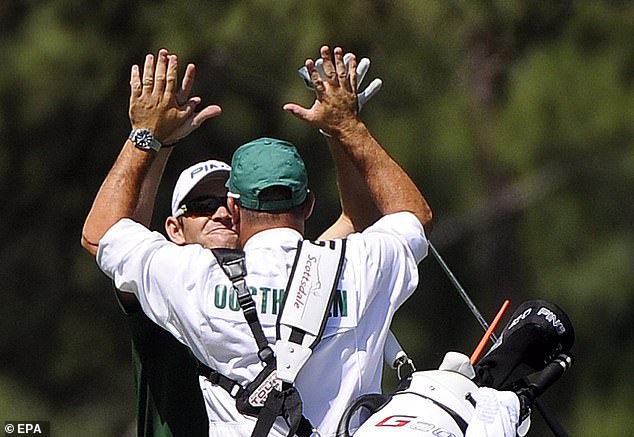 Poor celebrations aside, it took him from two shots behind leader Peter Hanson to one stroke in front of the Swede and practically booked his playoff spot with Watson with 16 holes left to play.

Sadly, if he had gone on to win that playoff, the shot would be considered one of the greatest of all time along with the likes of Sarazen’s ‘Shot Heard Round the World.

But alas, he didn’t.

The South African may not have walked away with a green jacket but an Augusta National crystal bowl must be some sort of consolation prize… right?

Phil Mickelson was one shot off Oosthuizen’s lead after three holes until he hit the disastrous fourth and saw his chances of claiming a fourth green jacket slip through his fingers.

The three-time champion threw away his chances as his tee shot on four hurtled into the railings of the greenside grandstand.

If it had ended up in the grandstands, Mickelson would have received a free drop and would have had what he calls an easy chip in a bid to save his par.

As it happened it ricocheted into the trees left of the hole. 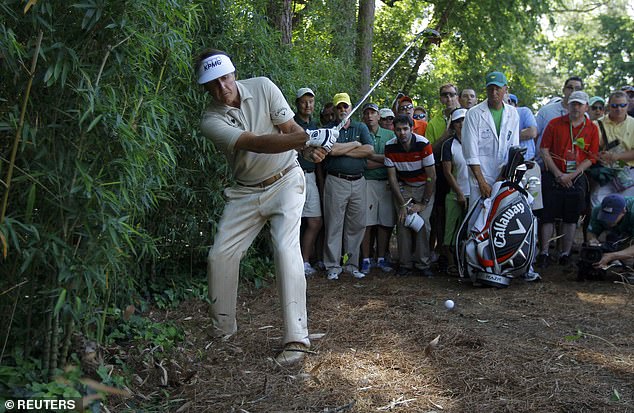 The lefty managed to find his ball but could only knock it a yard out with an attempted right-hand hockey-esque shot before barely making contact with his third shot and spewing it off the heel into a crowd of spectators.

A misjudged flop shot was then sandy before he finally found the green from the bunker, almost holing out before tapping in to walk off with a humiliating triple-bogey six.

Mickelson still had 14 holes to make amends but he could only pick up birdies at the three remaining par fives – the eighth, 13th and 15th.

He would finish tied third.

Bo Van Pelt had a poor showing over the first three days of the tournament but something finally clicked for the American on the final day.

He entered his last round at a shocking seven over but as he began to drill in the long putts and pound his drives down the fairway his score began tumbling down.

Van Pelt managed to shoot a 64, eight under, for the day and rocketed up from 49th to 15th. His eight under included four birdies and an eagle.

But his greatest moment came on the par-three 16th where he found the hole in one. 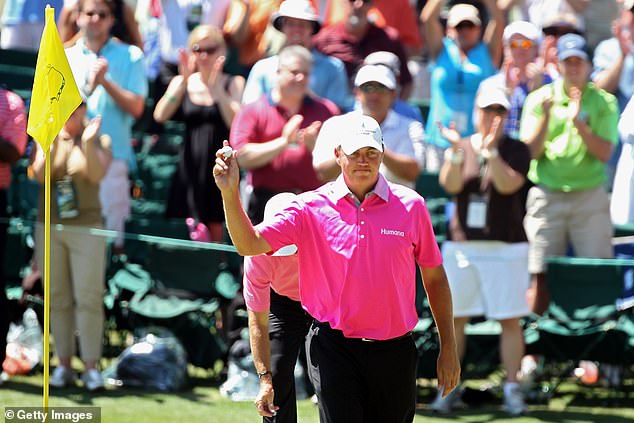 He flew the ball several paces right of the hole and it trickled left, down the slope and back into the cup for an ace that sent a roar throughout the Georgia pines. It was his fifth ace in competition of his career.

Van Pelt’s round could’ve been extra special but he could not convert three other birdie putts from inside 15 feet.

But a poor first three rounds of 73, 75, 75 meant he was never in contention and only had a one-under overall finish to show for final day theatrics.

Van Pelt later found himself in good company on 16 as Adam Scott joined the ace brigade.

The Australian later described the shot as a ‘nice’ little seven iron but if the gallery’s reaction was anything to go by it was slightly better than ‘nice’.

The crowd were less restrained about the shot, which landed above the pin and rolled down into the hole, 170 yards from the tee.