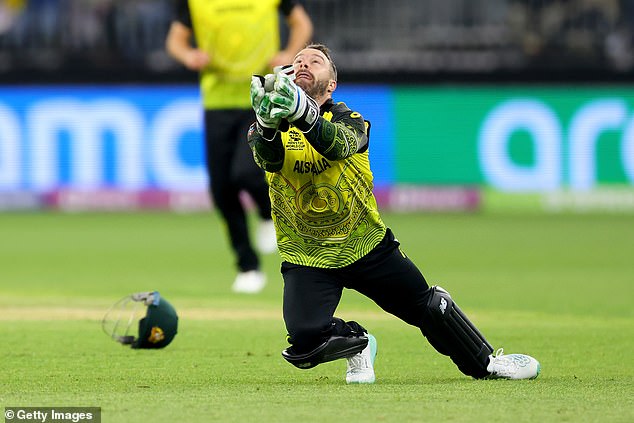 Australia’s preparations for their must-win T20 World Cup clash against rivals England have been rocked by Matthew Wade becoming the latest player to be struck down with Covid, although he is expected to play on Friday.

In a statement announced on Thursday, Cricket Australia revealed that Wade contracted the virus on Wednesday but is only suffering ‘minor symptoms’.

And with the 34-year-old the only wicketkeeper in their 15-man squad – following Josh Inglis’ hand injury last week, he is expected to play ‘unless his condition deteriorates’.

However, Wade will need to travel to the ground separate to the rest of the squad and will not be able to use the same dressing room prior or during the game.

During their indoor nets session on Thursday, all-rounder Glenn Maxwell donned the wicketkeeping gloves on and was put through his paces by assistant coach Andre Borovec – who is a former first-grade gloveman.

Speaking last week, Australia captain Aaron Finch said that opening batter David Warner would be the likely man to take the gloves should anything happen to Wade.

“Probably Davey Warner, I would think,’ he said prior to their defeat by New Zealand.

‘He did a little bit of practice yesterday [Thursday, October 20]. Myself, maybe I could do it. Maybe captaining and keeping when you haven’t done it before is a little bit tougher.

‘Maybe Mitchell Starc can bowl a few upfront, take the gloves through the middle, and then bowl again at the end. It’s a good question.

‘Probably Davey, to be honest. And like I said, that’s a risk that we’re prepared to take at the moment.’

Wade becomes the second Australian case this week, with Adam Zampa testing positive ahead of the Sri Lanka game.

However, unlike Wade could do on Friday, the leg-spinner did not feature against Sri Lanka after experiencing minor symptoms

Zampa and Wade are not the only players to have been hit by coronavirus during this tounament with Ireland’s George Dockrell having played against both Sri Lanka and England despite his positive Covid test.

The Australian government, who have employed a very hard line on lockdowns and vaccination to slow the spread during the pandemic, scrapped mandatory isolation rules earlier this month, which has allowed the World Cup to played in a more relaxed setting.

The relaxing of rules comes a year after Australia triumphed in last year’s T20 tournament in the United Arab Emirates, which was held in a unique ‘bubble’ setting due to the pandemic.

It saw teams have to adhere to a strict bio-secure protocol as the ICC restricted contact with anyone outside of the tournament and its bubble.

But while the strict isolation harboured a strong team spirit in the Australia camp that saw the men’s side win their maiden title run, the relaxing of rules has been welcomed by the team.

‘The team went out for dinner last night and we actually were chatting about it, (saying) ‘this is the first time we’ve done this for about three years’.

‘It’s great fun. It’s one of the main things we all love about playing for your country – you get to go and see new places and experience different things.’