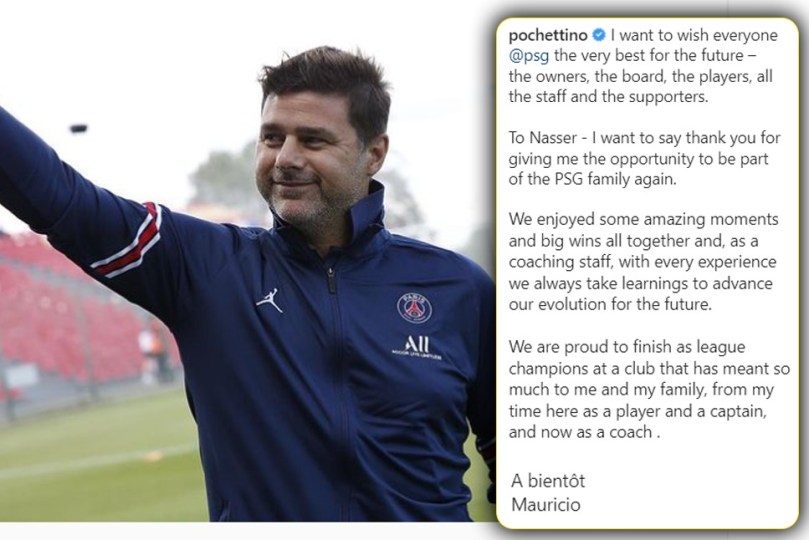 Ligue 1: Mauricio Pochettino bids farewell to PSG – Mauricio Pochettino has penned a touching farewell message to PSG after his sacking from the club was confirmed earlier today. Following months of fervent speculation, the axe came down on Pochettino’s tenure after his failure to win the Champions League, despite having an all-star line-up. Follow Latest Football News LIVE with InsideSport.IN

Newly announced Paris Saint-Germain manager Christophe Galtier hopes to keep Neymar in Ligue 1, says “I want him to stay with us”

Ligue 1: Mauricio Pochettino pens farewell message to PSG after being sacked and replaced by Christophe Galtier, says ‘We enjoyed some amazing moments and big wins all together’ – Check out

PSG did win the Ligue 1 title, but the former Tottenham boss was handed his marching orders this week, with Christophe Galtier unveiled as his replacement.

However, it is evident that there is no bad blood behind Pochettino’s exit, with the 50-year-old taking to social media to reflect back on his year-and-a-half reign.

‘I want to wish everyone at PSG the very best for the future – the owners, the board, the players, all the staff and the supporters,’ he wrote on Instagram.

‘To Nasser [Al Khelaifi, club president] – I want to say thank you for giving me the opportunity to be part of the PSG family again.

‘We enjoyed some amazing moments and big wins all together and, as a coaching staff, with every experience we always take learnings to advance our evolution for the future.

‘We are proud to finish as league champions at a club that has meant so much to me and my family, from my time here as a player and a captain, and now as a coach.

Pochettino’s sacking was announced in a brief statement this morning, which read: ‘Paris Saint-Germain confirm that Mauricio Pochettino has ended his role at the club.

‘The club would like to thank Mauricio Pochettino and his staff for their work and wish them the best for the future.’

The tactician joined PSG in January 2021 on an 18-month deal to replace the outgoing Thomas Tuchel, and finished second in the league in his first season.

PSG crashed out of the Champions League in the semi-finals, however, although Pochettino went on to taste silverware after his side won the Coupe de France final.

He then extended his contract until the summer of 2023 and went on to win the league this year, although Real Madrid dumped them out of the Champions League.

Galtier, who managed Nice last season, has penned a contract until 2024 – with a press conference held this afternoon to allow him to take questions from the media.

Ligue 1: Mauricio Pochettino pens farewell message to PSG after being sacked and replaced by Christophe Galtier, says ‘We enjoyed some amazing moments and big wins all together’ – Check out