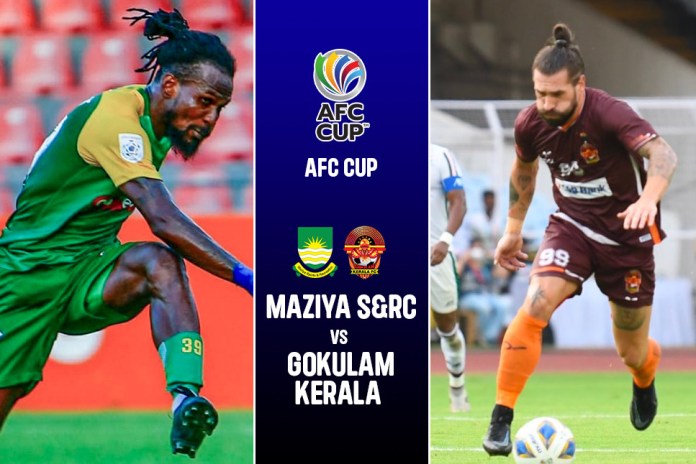 Maziya vs Gokulam Kerala Live: Follow Live updates – An opening day 1-0 defeat to Bangladesh’s Bashundhara Kings means another loss on Saturday will end the hopes of Maziya S&RC with a match to spare. The match promises to be another stiff test for the Maldives side with Gokulam Kerala having impressed in their 4-2 win against fellow Indian side ATK Mohun Bagan on Matchday One. Follow MAZ vs GOK Live & AFC Cup Live Updates on InsideSport.IN

The fresh I-League champions Gokulam Kerala had a wonderful opening game in their AFC Cup campaign on a bright note as they went on to decimate Kolkata giants ATK Mohun Bagan with a whopping scoreline of 4-2. On the other hand, the Maldives side, Maziya who lost their opening encounter 1-0 to Bashundhara Kings would be eager to win their next tie to stay in contention.

Maziya 0 – 1 Bashundhura Kings (FT)
A goal in the first half gives Bashundhura Kings the 3 points. The #greenboys gave in a good effort to come back but it was not enough.
We will try our best to do better in the next matches. Insha Allah #ooredoomaldives #greenboys #AFCCup2022 pic.twitter.com/ymjUnWa5Yv

Though it had been quite an uneventful match, Gambia’s Nuha Marong scored the only goal in the first half to secure all 3 points for the Bangladeshi side. Head coach Miodrag Jesic said Maziya is ready to bounce back against Gokulam Kerala.

“The mood in the team is good, although we are expecting a very tough match tomorrow. We will try to win. I think we played a good game against Bashundhara but what we need to do against Gokulam is minimise our mistakes and convert our chances,” said Jesic.

As for the defending I-League champions, Gokulam Kerala displayed their attacking prowess and their counter-attacking playing style as they went on to rip the ATKMB defense in the last game. Luka Majcen scored a wonderful brace while goals from P Rishad and Jithn MS sealed the tie.

Head coach Vincenzo Alberto Annese said his Gokulam Kerala side have to be focused to deal with Maziya’s threat. “We will face a team who have rich experience in this competition. They have players who have stayed with the team for a long time and they have national players. “We studied them, they have quality in the middle, they have good pace and they try to give a lot of trouble to defensive lines.”

⏭️ Next Up: @MaziyaSr 🇲🇻

The exciting encounter between Maziya vs Gokulam Kerala of the AFC Cup will be streamed on the Star Sports Network.

Fans can watch the match between Maziya vs Gokulam Kerala Live Streaming on the Disney+ Hotstar platform.