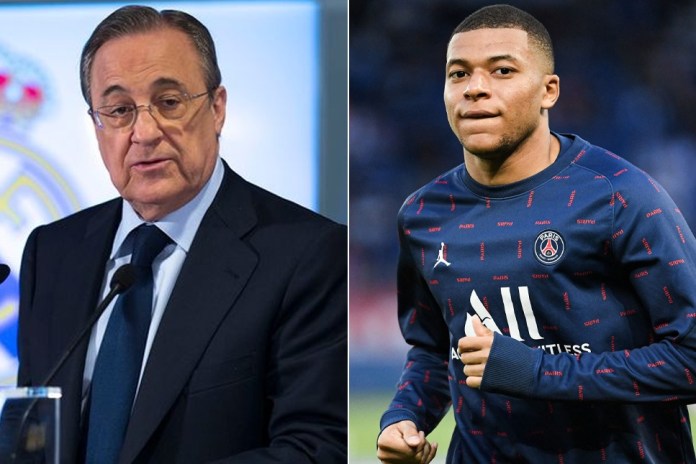 “Champions League football for us has never been in doubt. We’ve never been worried for Real Madrid to be excluded by Uefa”.

Real Madrid president Florentino Perez has claimed Kylian Mbappe decided to stay at Paris Saint-Germain because he was “confused” after being put under intense “political and economic pressure”.

But when asked about the possibility of Mbappe joining Real Madrid in the future, Perez kept the door open to the 23-year-old. “This Mbappe is not my Mbappe,” Perez said. “But if he changes, who knows? Life takes a thousand turns.”

Mbappe stunned Real Madrid last month by rejecting a move to the Santiago Bernabeu in favour of signing a new three-year contract at PSG, with a reported salary of between 40 to 50 million euros ($41.6 million to $52 million).

“His dream was to play at Real Madrid, we wanted to do it last August and they didn’t let him leave, he kept saying he wanted to play at Madrid and like 15 days before he changed the situation.

“This is not the Mbappe I wanted to bring, he is another one, who must have changed his dream. He changes, he is offered other things, he is pressured and he is already another footballer.

“They practically offered him the chance to be the leader, not only of a football team, but the management,” Perez told the Spanish television programme El Chiringuito on Wednesday.

Florentino Pérez: “It was not easy for Mbappé to receive calls from the president of France… to tell you not to leave the club. Then go to Qatar and they offer things that drive you crazy, probably things out of proportion. This is why Kylian has changed”. 🚨🇫🇷 #Mbappé pic.twitter.com/LWRLJkiuJS

“That, plus the money and the offer of leadership have made him change his mind. He had a hard time. When you get into a panic, you try to get out of that as quickly as possible, I can understand that. But what I can’t understand is the King of Spain calling a Spanish club to tell him a player should stay.

“There are two states involved there, one is Qatar and the other is France,” Perez continued. “I have been here since 2000 and I have never seen that before, that a president of a state calls a player. You can be a world-class player and not play in France,
like (Zinedine) Zidane or (Karim) Benzema.”

Perez has historically been a leading figure in calls for Europe’s elite football clubs to secede from UEFA competitions, and was the chairman of last year’s proposed breakaway competition.

It collapsed on the back of shaky alliances between clubs as well as political and public pressure, with each of the five aligned Premier League clubs withdrawing from the Super League in the days following an announcement to secede.

Speaking on the El Chiringuito programme, the Real Madrid president branded European football’s current structure a “monopoly” for UEFA’s gain and revealed plans to eventually break away from the rest of European football have not formally been suppressed.

“Of course it is still alive, right now there is a question raised in the Luxembourg Court, there will be a hearing shortly and it will rule on the issues we have raised,” Perez said. “We believe that we have the right, within the European Community, to organise competitions between us, with UEFA.

“We understand that UEFA is a monopoly and in this Europe of 27 [EU member states] a pillar is that of competition.”

On whether he was afraid that Madrid would be banned from the Champions League after UEFA president Aleksander Ceferin’s threat to expel aligned clubs from UEFA competitions, he added: “We have never had that fear, and that was when they said it at the beginning.

“No, we want to win the Champions League. PSG is not our enemy. Neither Chelsea nor [Manchester] City. Everyone who competes is friends, we get along with everyone.”