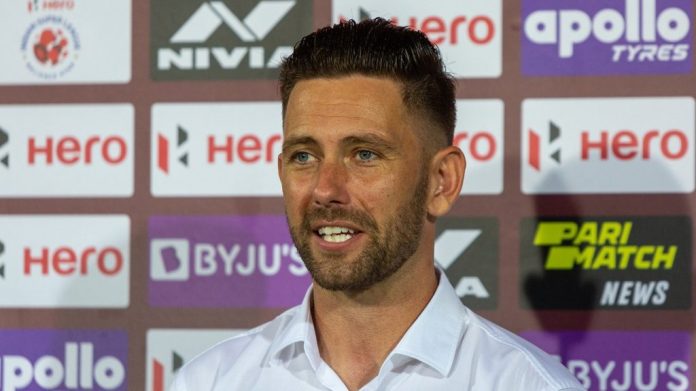 ISL Season 8: Mumbai City FC off late have been on a winning run and the streak continued against FC Goa as the Islanders defeated their neighbours 2-0 courtesy of goals from Mehtab Singh and Diego Mauricio. This win was crucial for Des Buckingham’s men as they were pegged back after Kerala Blasters won their respective match against Chennaiyin FC earlier on the same day. Follow all the ISL 2021-22 LIVE Updates only on InsideSport.IN

Mumbai City FC started tentatively as they gave away a penalty. But fortunately, Mohammed Nawaz denied Airam Cabrera and later in the second half Mehtab Singh and Diego Mauricio found the net to help them steer past the spirited Gaurs.

Mumbai City FC head coach Des Buckingham was very happy with the effort from his men. The Islanders are currently in the fourth position with 31 points and have two matches remaining whereas Kerala Blasters are in fifth with only a point behind them. Given the Blasters’ victory over Chenaiyin FC, Buckingham was quizzed whether the result made it more important for his team to secure the win. “I didn’t know the result of the other game before we kicked off, it’s not important for me what other teams are doing, the main thing is that we focus on what we were doing. And tonight, it was important that we come away with a win, and not only have we done that we’ve come away with a clean sheet,” he replied at the post match press conference.

Also Read: ATKMB vs BFC: ATK Mohun Bagan faces trial by fire against Bengaluru FC in a must win clash

Buckingham lavished praise on FC Goa and highlighted how being out of the semifinals race eases the pressure on their players, which becomes a challenge for the other team. The English tactician lauded his defence multiple times as they were really good in keeping the Gaurs at bay and securing that elusive clean sheet.

“FC Goa is a wonderful team, they play some good possession-based football. And we knew that obviously they are out of semi-finals and they’d give games to two players that maybe have not played so much. That’s always a challenge in itself because they want to come in and prove that they’re capable of planning this level. It was very pleasing with how we went about our business, especially with the goal in the first half and what we showed in the second half was a fantastic way of defending, we really kept them out, we knew they’d have the ball. Then for Diego to come on as the change and have an impact to secure the game 2-0 that was very pleasing,” Buckingham reflected on the win against FC Goa.

Buckingham agreed that allowing FC Goa more possession was a part of his plan which worked successfully because their defence stood tall and delivered a masterclass. He once again lauded the defenders for their efforts and feels that they should have scored a couple of more goals.

When asked whether allowing more possession was a plan against FC Goa, he explained, “Yeah, it was. We know how Goa like to play. I think in most of the games, if not all the games this season, they’ve had more possession. We needed to be smart about how we set up. I was very happy with how we defended especially more so in the second half. We got our goal at halftime and as I said, we should have had a couple more. We needed to be smart when we won the ball. And for me, we’ve won four games in five now, we’ve got a very young side.”

Mumbai City FC will surely be in the semifinals of the ISL if they continue this winning run as they take on Hyderabad FC and Kerala Blasters next in the remaining two matches of the current campaign. While the Nizams have qualified for the playoffs, Kerala Blasters are fighting it out against the Islanders for a spot in the last four. So the Englishman believes it will get a lot more exciting and also trusts his players to get the results.

“They’re the two games that you look forward to. We’ve played both of them already. They’re very good teams. I’ve spoken about coming into the back end of the season with momentum, you know, we’ve won four and five now two consecutive clean sheets. And we’ve got all our players fresh and ready to go again. We’re looking forward to the next game,” Buckingham concluded.