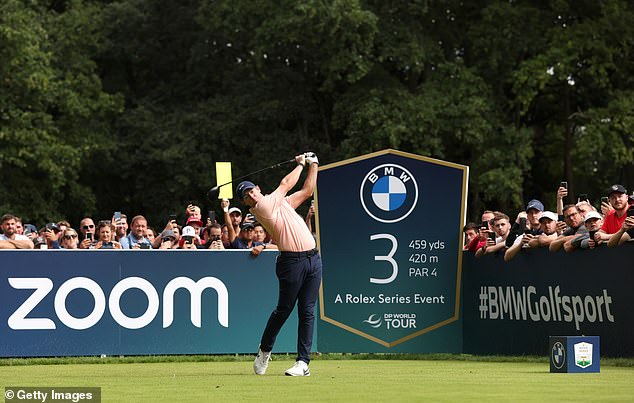 For all his digs at those who have cashed in on truncated tournaments, Rory McIlroy is proving himself rather decent at this 54-hole lark. Indeed, with two-thirds of the BMW PGA Championship completed in its shortened format, he is lurking in dangerous proximity to the leaders.

At 11 under, he will commence play in Sunday’s final round just one stroke behind Soren Kjeldsen and Viktor Hovland, which for that Scandinavian pair must feel somewhat akin to a one-metre head start on a Great White.

McIlroy’s form in recent months has been quite formidable, and his bogey-free loop of 65 around Wentworth’s West Course broadly hinted that he has successfully transferred what he was doing in the heat of the US to the squishier conditions of Europe. At times on Saturday, he was a touch lucky; at others he was simply exceptional.

Both sides of that coin were shown in his back nine, first with his fine recoveries for par from sticky situations at the 13th and 16th, and then with a bounce-out from the trees at 17. In the fortuitous case of the later it enabled a birdie, quickly followed by another to close, which supplemented a brilliant eagle at four and other strokes gained through laser iron shots at eight, 11 and 12.

If momentum means anything, then he will take some beating on the home straight, which follows a fortnight after he won £15million for the taking the PGA Tour Championship in the US. His aim is to do likewise in the European equivalent in Dubai in November, and given he already tops their standings, another win in the DP World Tour’s flagship event would make him a more-than-solid bet to complete a double done only once before by Henrik Stenson.

‘I had that great finish in the States and I wanted to turn my attention to here and win The Race to Dubai,’ he said. ‘It would be great to win the Race for the fourth time, and I didn’t want to let up at this tournament.

‘I’ve got a great chance tomorrow to win this prestigious event but also to extend the lead in The Race to Dubai.’ 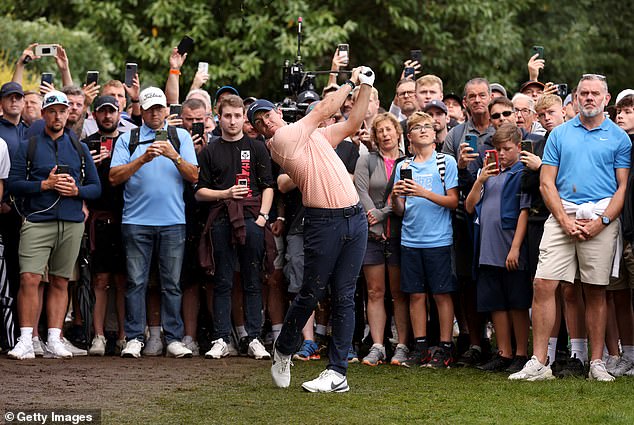 It remains a quirk that McIlroy has rediscovered some of his best golf at a time when his distractions have never seemed more obvious. His role in the vanguard against the LIV series and its threats to traditional golf have dominated his narrative around tournaments, and yet he is thriving on the back of a season when he also finished second, eighth, fifth and third in the majors. He has fallen painfully short in regard of those tournaments that matter most, but by any other metric it has been an extremely heathy campaign for the 33-year-old.

‘I think if I can play well from now to the end of the year, I keep the momentum that I’ve built going into 2023,’ he said.

Following an opening 68 on Thursday that was undermined by a solitary bogey, McIlroy’s resumption after the cancellation of Friday’s play saw him get through without dropping a single stroke. The closest he came to bother was a thinned approach coming up 40 yards short on the 13th and a botched chip on 16 leaving him a 10-footer to save par. He survived both with excellent putting, enabling the better aspects of his card to shine.

They included an eagle three at the fourth after a fine approach from 200 yards and a birdie at eight, before gaining strokes back-to-back at 11 and 12 with irons inside three feet. His play from the fairways was largely excellent, though he was lucky to be there on 17 after clattering a tree off the tee. ‘That hit at least a couple of branches,’ he said. ‘Could have been a seven so a three-shot swing.’ 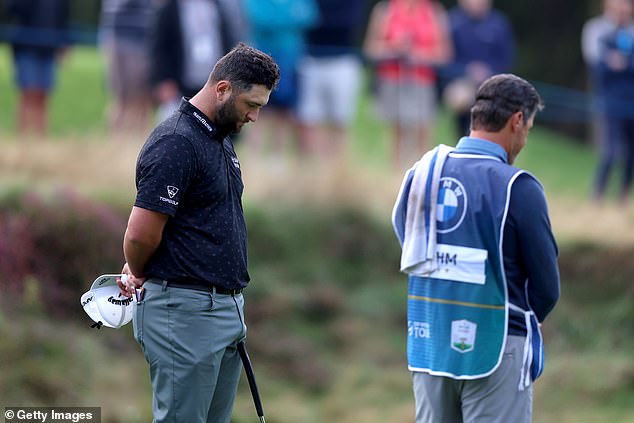 A run of four pars threatened an underwhelming finish, but after taking birdie at 17, McIlroy closed with another at the last. His playing partner Matt Fitzpatrick took an eagle at 18 to reach eight under, and England’s Matthew Jordan is two better off at 10.

It transpired play was only possible after lengthy discussions between the DP World Tour and the England and Wales Cricket Board, with both parties unsure how best to mark the Queen’s passing beyond the initial cancellation of play on Friday. No doubt that was shaped by neither wishing to be an outlier in going ahead and each ultimately opted to plough on. Here, that meant flags at Wentworth were flown at half mast and two minutes of silence at 9.50am, with the tournament cut to 54 holes – the same length as a LIV event, as it happens. For those interested, their highest ranked of 17 players present is Talor Gooch in a tie for ninth, two strokes behind McIlroy.

Tour CEO Keith Pelley said: ‘Most of the conversation I had was with the England Cricket Board and we both felt that bringing people together collectively at this particular time, having both paid the honour and respect of the day with cancellation on Friday, was the right decision and the right thing to do.’

Referring to football’s decision to cancel its weekend schedule from the top of the game to the bottom, McIlroy said: ‘I get it with football, because Prince William is part of the FA (as FA president) and all that sort of stuff, so there’s other things at play there. But I thought it’s the right decision here. I don’t think we are disrespecting anyone by playing. Hopefully we are showing our respect and celebrating what an incredible life the Queen had.’