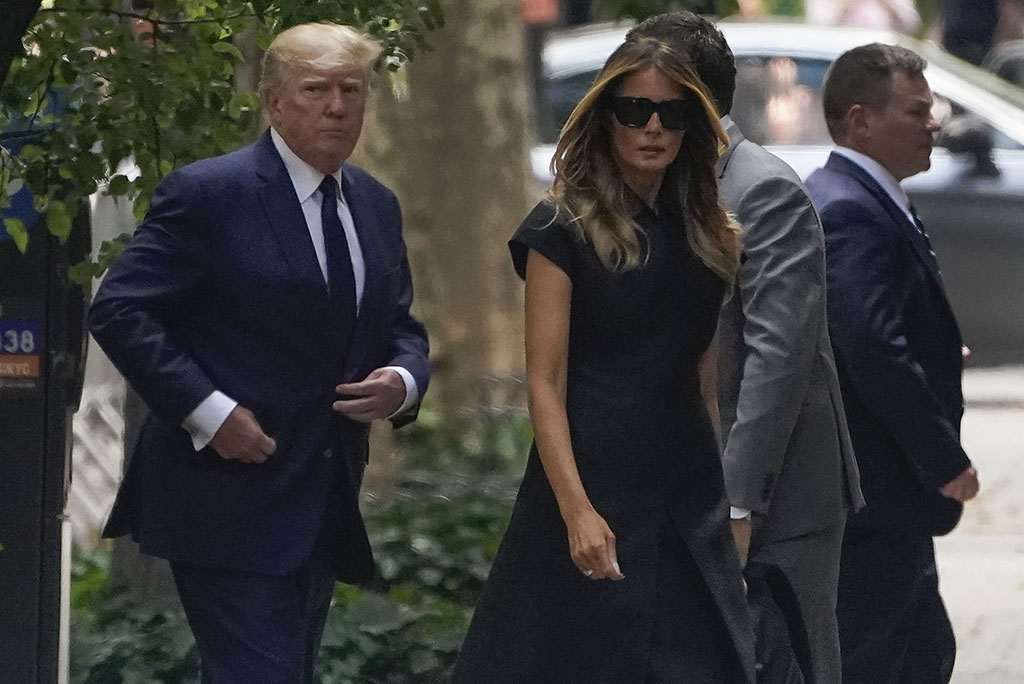 Ivana Trump — ex-wife of Donald Trump and mother to Donald Jr., Eric and Ivanka — was memorialized during a somber New York City funeral today, bringing her famous family together to pay respects to her life and legacy. Ivana died on July 14 after reportedly falling down the stairs of her Manhattan apartment, according to the medical examiner and officials. She was 73.

Former president Donald Trump attended his first wife’s funeral service with his current wife and former first lady Melania Trump. For Ivana’s funeral services, Melania Trump wore a simple short sleeve black dress with a pointed collar and slightly-opened neckline. The A-line dress featured a mid-calf skirt that had a statement pleat at the front. The 52-year-old former first lady wore a pair of simple black pumps with the dress.

Donald Trump, who was married to Ivana for 15 years, wore a navy suit and tie with a white shirt and black shoes.

Donald famously kept a close relationship with Ivana after their divorce, with Ivana calling them “the best of friends” and supporting both his campaign and tenure as president.

Ivana Trump made an indelible mark on the fashion scene throughout her life, notably rising to socialite status after meeting and marrying a young Donald Trump during her modeling days in the mid-’70s. After her marriage to Trump, Ivana quickly found her footing as a highly-regarded New York City socialite, rubbing elbows with some of the biggest names in fashion. After she divorced Donald Trump, Ivana launched her own line of clothing, costume jewelry and cosmetics called Ivana Haute Couture sold on the Home Shopping Network and the Canadian Shopping Channel. She also launched her own fashion and fragrance company, House of Ivana, in 1995.