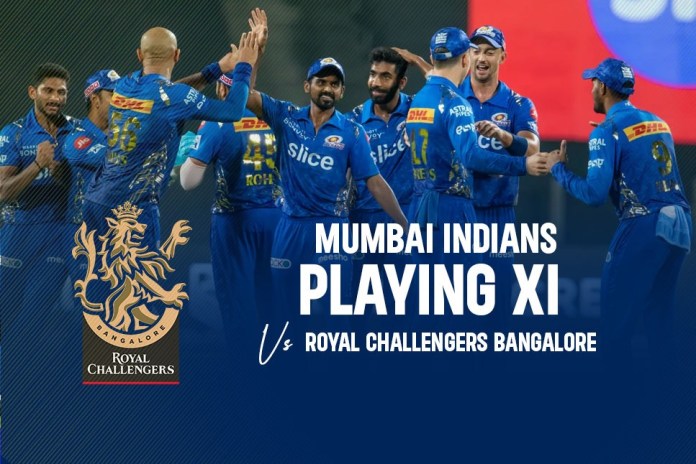 MI Playing XI vs RCB: Mumbai Indians captain Rohit Sharma is scrambling for options as the five-time champions are still searching for their first win of IPL 2022. MI have lost all three of their games so far, and Rohit will hope to inject some pace and momentum into the side when they prepare to face off against the in-form RCB. Mumbai who lost heavily to KKR last time out, are likely to give Riley Meredith his first game in an MI shirt, following the struggles of Daniel Sams. Follow IPL 2022, RCB vs MI Live updates on Insidesport.in

Mumbai Indians have struggled for consistency this season and Rohit Sharma will hope that his side can turn their campaign around before it’s too late. The bowling particularly has been a major let down and Rohit is likely to address it, with Daniel Sams likely to make way for Australian speedster Riley Meredith. Sams was carted for 35 runs by Pat Cummins last time out and Meredith’s express pace should help him in pace-friendly conditions, especially with the new ball.

Basil Thampi’s place in the side is also uncertain as the Kerala pacer has chipped in with mediocre performances in the three games. With Sams going out, Rohit could opt for Jaydev Unadkat, to keep a left-arm pace angle in his attack. Unadkat could potentially turn out to be a good option, with the ex-RPSG pacer having played in Pune and enjoyed great success back in 2017.

The selection conundrum however doesn’t end for Rohit Sharma.  Sams slots in at No.7 for MI, meaning a bowler would further weaken MI’s batting order. TNPL star Sanjay Yadav could make his bow for Mumbai or Fabian Allen could also get a game, depending on who Rohit chooses to replace Sams, Meredith or Unadkat.

Tim David, who was dropped last game, could also be brought back, but MI will have to scramble for bowling options. Should David come in, Rohit will have to eke out his fifth bowler overs from Dewald Brevis, Kieron Pollard, Tim David, and Tilak Varma. None of the quartet are full-time bowlers but could chip in with some overs on a good day.