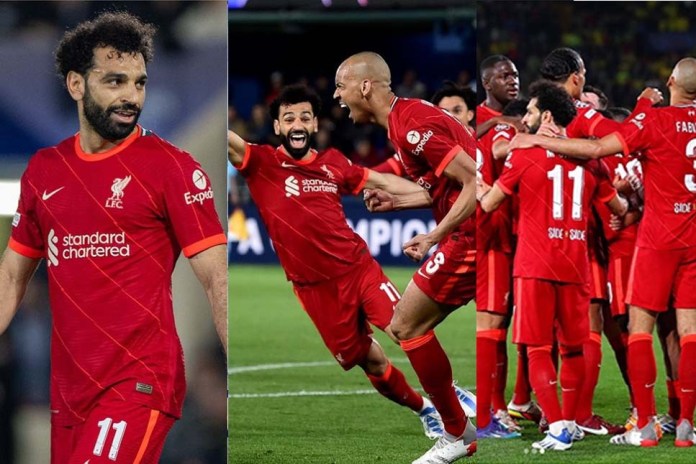 Mo Salah played a key role for his side in their semi-final game against Villarreal. Known to be giant killers after eliminating Juventus and Bayern Munich, Villarreal made a stunning comeback into the tie in the second leg of the semis. However, it was Mo Salah and Co who overcame the Villarreal obstacle to seal their spot in the finals.

Real Madrid made a stunning comeback against Manchester City as the most successful club in UCL history eyes yet another title. But standing in their way are the mighty reds from Merseyside. Mo Salah who eyes revenge for the 2018 final loss, took to his social media platform to post that he and Liverpool has a score to settle with Real Madrid.

We have a score to settle. pic.twitter.com/MWxfhIIW78

Mo Salah’s caption read, “We have a score to settle.”

It has been a bitter memory for Mo Salah in the 2018 UEFA Champions League finals. Salah was subbed off after falling off an awkward angle where he dislocated his shoulder after an ugly clash with Sergio Ramos.

Real Madrid ended up winning the tie 3-1 with Gareth Bale producing an absolute gem of a performance. Mo Salah will be eyeing perfect revenge if they can pull off a win against the Los Blancos at the finals this year.

After his side’s win over Villarreal Salah said, “I want to play Madrid, I have to be honest. Manchester City’s a real tough team, we’ve played against them a few times this season. If you ask me personally, I would prefer Madrid. We lost in the final before against them, I want to play them and hopefully we’ll win.”

“I like it. He’s forward, he’s fronted up. You ……..can ask players and they say “Oh, I don’t know, I don’t care, I’m not sure…” He’s got unfinished business with Real Madrid. He obviously had to come off with the challenge with Sergio Ramos. ‘So for him that’s something where his fire is burning, he’d prefer to win it against a team that beat him last time. Good luck to him.” said Rio Ferdinand.