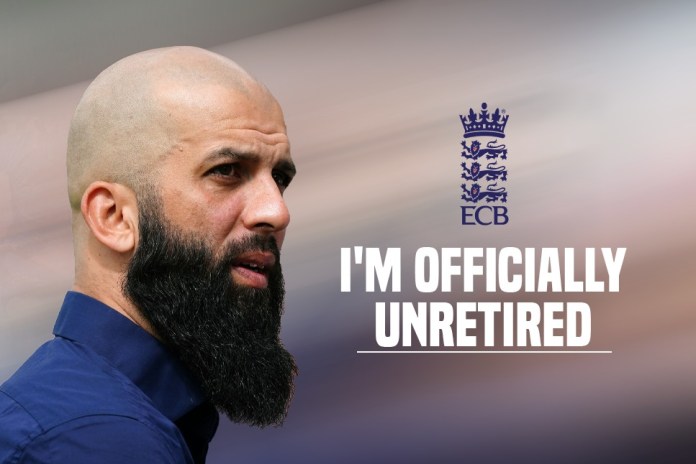 England tour of Pakistan: Former England cricketer Moeen Ali has revealed that he is open to making a return for his team in the longest format of the game for the series against Pakistan. Moeen had announced his retirement from Test cricket last year but is open to a return, following the arrival of new head coach Brendon McCullum. Follow England tour of Pakistan live updates on Insidesport.IN

England all-rounder Moeen Ali said that he has officially “unretired” from Test cricket following a chat with new head ball coach Brendon McCullum. The 34-year-old reversal comes less than a year after the all-rounder announced his retirement from the longest format of the game, having featured for England in over seven years.

Moeen featured in 64 Tests for England, scoring 2914 runs with five Test centuries and picking up 195 wickets. The 34-year-old, while on commentary for BBC, said that a return to the Test team would be “very hard to say no to”. Moeen further added that a conversation with the former Kiwi captain had indeed taken place.

“I spoke to McCullum this morning, and we did discuss Pakistan this winter. The door is always open, and yeah, I suppose I am officially unretired,” Mooen said.

He added, “He is a very difficult person to say no to. I find that very, very hard. He is very convincing and to be honest I would love to play under him and Ben Stokes. They are both very aggressive and I think I would suit their cricket a bit more.”

Moeen who has roots in Pakistan had earlier said that the lure to play in Pakistan would be greater and he would consider returning to the fold. Ali on Saturday had said, “When, or if, Baz McCullum wants me, I’ll definitely play in Pakistan.”

“To travel with an England side there having family background from that part of the world will be amazing. It would be a historic event because of England not touring there for so many years. I know the support and love you can get out there, they love cricket. It’s really something that’s very appealing for sure,” Moeen added.