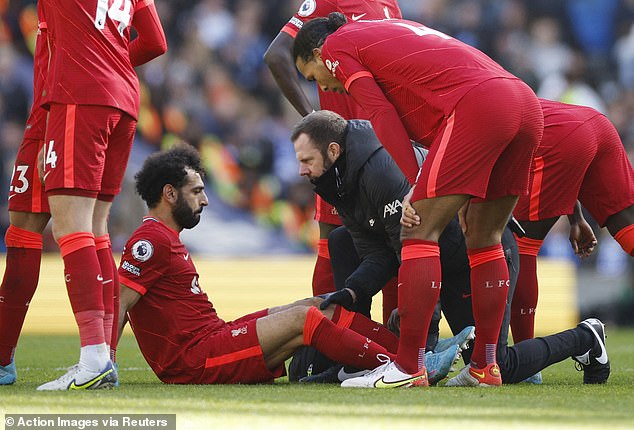 Mohamed Salah is a major doubt for Liverpool’s trip to Arsenal after undergoing tests on a foot injury sustained at Brighton, as Jurgen Klopp’s men look to keep the pressure on Man City in the title race

By Charlie Walker For Mailonline

Mohamed Salah is a major doubt for Liverpool’s visit to in-form Arsenal after he was absent from the Reds’ training session on Monday.

Liverpool visit the Emirates on Wednesday, but may be without their talismanic forward, who was forced off in the win at Brighton.

The Egyptian star headed straight down the tunnel after being substituted against the Seagulls on Saturday, just five minutes after he had coolly dispatched a penalty to put his team 2-0 up in the second half.

After the game, manager Jurgen Klopp revealed his star forward had sustained a foot injury when he had struck the ball and it had been blocked.

‘He thinks it is not serious but when you see Salah is sitting down, something is not 100 per cent right,’ said Klopp after the game.

Klopp’s misgivings may have been well founded. The player subsequently underwent tests to ascertain the extent of the damage and did not participate in training, according to the Liverpool Echo.

He now faces a race to be fit for the trip to London, with next weekend’s FA Cup quarter-final against Nottingham Forest to follow. 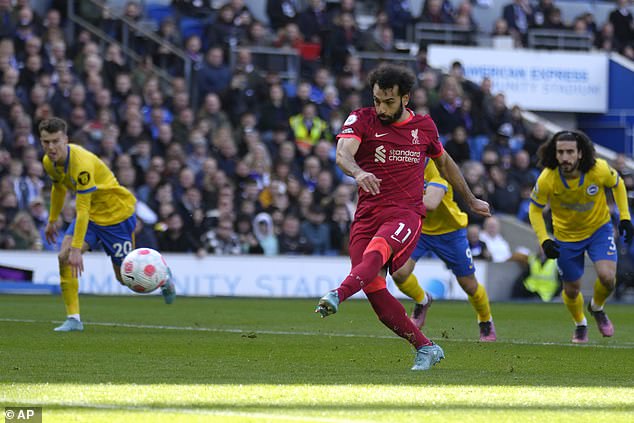 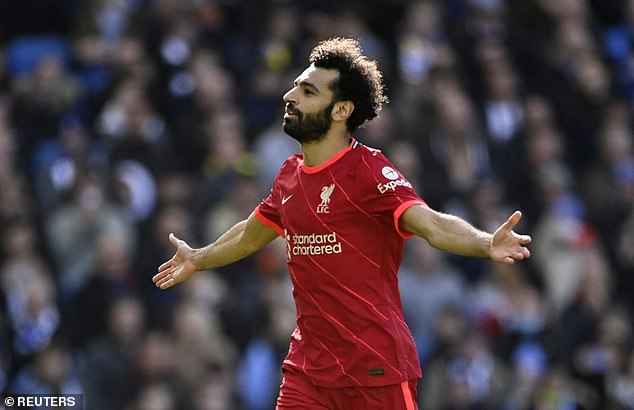 There is never a good time to lose a prolific goal scorer and chance maker, and if Salah is to face a spell on the sidelines it will be particularly painful for a Liverpool team trying to force their way back into a title race.

The Reds are on a fantastic run with eight top-flight wins in a row, and so is Salah.

Salah’s penalty was his 28th goal of another prolific season and his 20th in the Premier League. He has scored four goals in four Premier League games and claimed one assist.

On top of that, the game at Arsenal promises to be more challenging than the Reds’ last two visits which saw Liverpool win 2-0 in the Carabao Cup in January and 3-0 in the Premier League last season.

Sandwiched between those wins was a 4-0 thrashing of the Gunners at Anfield in November, as well as a 0-0 draw in the League Cup.

But Arsenal have improved considerably since those defeats. They have won their last five top-flight matches and only lost once in eleven – a 2-1 reverse at home to Manchester City on New Year’s Day.

On Saturday, goals from Thomas Partey and Alexandre Lacazette saw them overcome Leicester City at the Emirates, which lifted them back into fourth place, one point above Manchester United, who beat fellow top-four contenders Tottenham.

Meanwhile, Liverpool will also be waiting on news of James Milner and Kostas Tsimikas,  who were also absent from the session on Monday, according to the Echo. However, Ibrahima Konate returned to full training having missed the last two games.