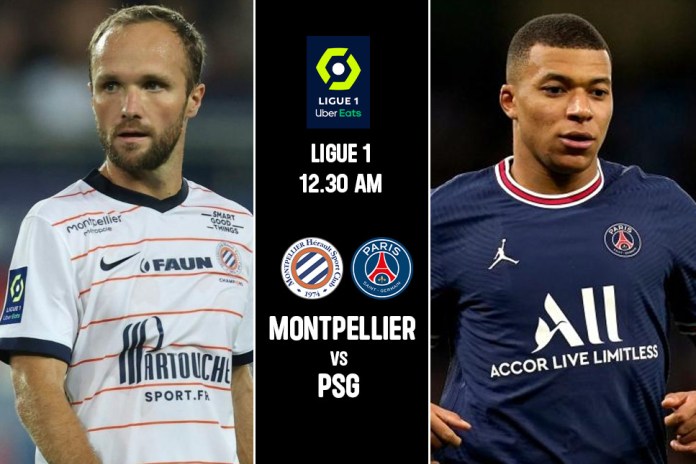 Montpellier vs PSG LIVE: Ligue 1 champions Paris Saint-Germain continue their stroll to the finish line with a trip to Montpellier HSC on Saturday in the penultimate game week of the season. The visitors were pegged back to draw 2-2 with Troyes last time out, while La Paillade went down 2-1 away from home to Clermont. Follow LIGUE 1 LIVE Updates with InsideSport.IN

Medical Update ahead of #MHSCPSG 📌@Aspetar

Montpellier left-back Ambroise Oyongo is back from a one-game ban served in the defeat to Clermont, so Mihailo Ristic‘s spot is at risk for the visit of the champions.

Midfield maestro Teji Savanier remains out in a bitter blow for La Paillade alongside first-choice goalkeeper Jonas Omlin, while Elye Wahi and Remy Cabella are also occupying beds in the medical bay.

Dall’Oglio has at least been boosted by the return of Jordan Ferri to team training following his thigh problem, while Pedro Mendes is on standby should Mamadou Sakho miss out on a meeting with his old club due to pain in his lower back.

PSG have now lost two players to yellow card bans, with Kimpembe and Neymar sitting this one out for the visitors.

Leandro Paredes and Julian Draxler will not play again this season, but Mauro Icardi could force his way into the squad if he shakes off a muscular problem – the same can be said for Colin Dagba and Abdou Diallo.

Neymar’s absence should lead to a swansong for Angel Di Maria ahead of his expected summer departure, while Sergio Ramos is primed to return to the rearguard and Idrissa Gueye should beef up the midfield, with Pochettino forced into a change of shape due to Neymar’s absence.

Ligue 1 LIVE: When will Montpellier vs PSG kick off? – Date

What time does Montpellier vs PSG begin? Time

The match between Montpellier vs PSG will begin at 12:30 AM – IST

Which stadium will Montpellier vs PSG be played at? – Venue

Where to watch the Live Telecast/Live Streaming of Montpellier vs PSG?

Where will the Ligue 1 matches be broadcasted?

For Indian fans, the new season of Ligue 1 will be broadcasted on Viacom18’s flagship youth brand channel MTV and OTT platform, Voot Select. The three-year partnership with India’s youngest and leading media conglomerate, which was announced a few months earlier, will bring the premier French football league to fans in the country with a fresh and exciting feel.

MTV relaunched Ligue 1 on Indian television with a quirky campaign that promised Zero Masala, Pure Football. The innovative campaign, which includes quirky films and engagement with Football fan groups across India, is making an enormous impact on social media. The campaign has delivered a whopping 38M Reach & 50M Impressions while drawing in passionate responses on social media too.