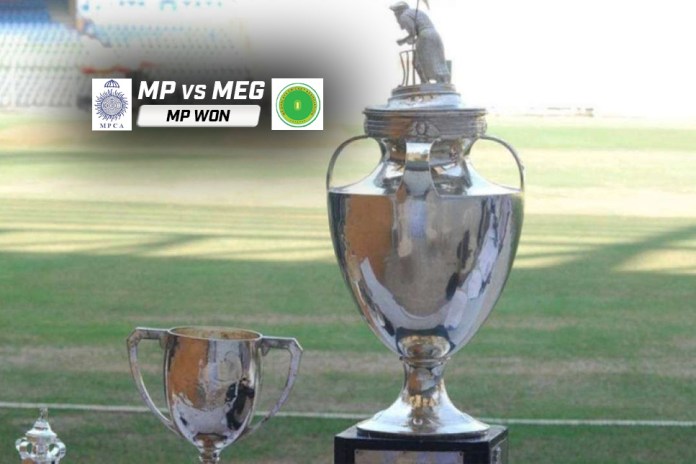 First MP shot out Meghalaya for a meagre 61 in their first essay and then piled up a staggering 499/6 declared, courtesy centuries by in form batter Shubham Sharma and debutant Akshat Raghuwanshi in their first innings.

MP bowlers led by Agarwal (5/38) then wreaked havoc as they bundled out their opponents for a paltry 137 in their second essay to register a convincing win.

The Chandrakant Pandit-coached side had trounced Gujarat in their lung-opener in an emphatic fashion.

Meghalaya started on their overnight score of 16/0 on the third day and needed to bat two days to salvage a draw, but none from their line-up, barring skipper Punit Bisht (38; 7×4), showed resistance as MP bowlers kept striking at regular intervals at the Saurashtra Cricket Association stadium C.

Meghalaya’s innings never got going and they were tottering at 62/5 at one stage.

Skipper Bisht, with his 64-ball 38, only delayed the inevitable. But once in form left-arm orthodox spinner Kumar Kartikeya (3/18) dismissed him, it was just a matter of time.

Kartikeya and pacer Gaurav Yadav (2/39), who had claimed a fifer in the first essay, then ripped apart the tail to complete MP’s sheer domination.