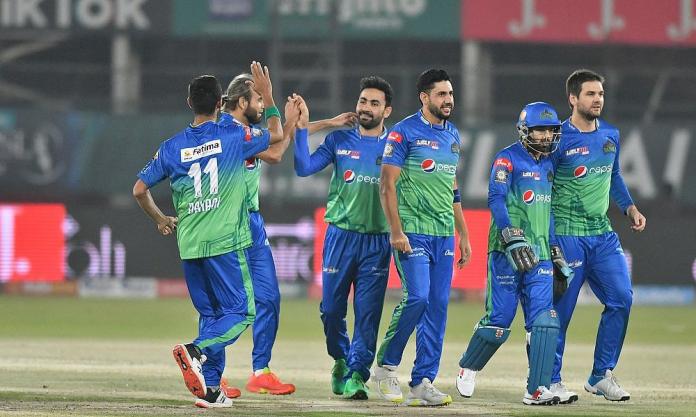 Multan Sultans beat Karachi Kings: Defending champions Multan Sultans confirmed a spot in the top two as they defeated Karachi Kings by seven wickets in the Pakistan Super League Season 7 at Gadaffi Stadium, Lahore on Wednesday, 16th February. Opting to bat first, Karachi posted 174 on the board. But they struggled to defend the total as Multan Sultan’s Rilee Rossouw sealed the game in the last over with three balls remaining. By facing yet another defeat Karachi Kings have now lost their eighth consecutive game in this seson. Follow InsideSport.IN for more updates.

Chasing 174, Multan Sultans got off to a brilliant start with their openers Mohammad Rizwan and Shan Masood shining yet again with the bat. The pair gave a good start to their team and played fluently. Within 7.3 overs they struck a 50-run partnership. Despite a good start, Karachi’s spinners Imad Wasim and Mohammad Nabi kept it tight after the powerplay and curtailed the run-flow. Boundaries were hard to come-by and the required run rate went close to 10 at one stage.

However both the batsmen kept their calm and never panicked. They just focused on rotating their strike. In the 14th over Rizwan reached his half-century off 45 deliveries by clipping a single off Mir Hamza. The single also brought out the pair’s 100-run partnership. However it didn’t last long as in the very next delivery, Shan Massod lost his wicket as he went for a big shot only to get caught at cover boundary. He was dismissed after scoring 45 off 41 balls.

With the required run rate close to 14, Rizwan changed the gear as he smashed four boundaries in the very next over. He continued his assault but it was cut short soon as he was caught at cover boundary for 76. Multan still needed 37 off the last three overs. Tim David scored a couple of sixes but was dismissed in the 18th over. Kushdil Shah then joined Rilee Rossouw and with 29 runs needed from 12 balls, just when it looked like the game was tilted in favour of Karachi, Kushdil smashed 19 runs off the next over bowled by Chris Jordan that included two sixes and a four. With 9 required off the last over, Rilee Rossouw sealed the deal with a huge six to help Multan win their seventh game of the season.

Earlier in the night, Babar Azam didn;t make a good start as he was dismissed for two in the second over. Opener Sharjeel Khan and Joe Clarke shared a valuable 72 run partnership for the second wicket. Clarke was particularly impressive, slamming 40 off 29 balls. At the end of 15 overs Karachi were struggling at 118/5. But a late flourish from Imad Wasim and Mohammad Nabi helped them score 56 runs off the next five overs to set a total of 174. It was a poor bowling effort from the Multan Sultans bowlers especially in the death, however they will be happy with the way they pulled off this chase. Karachi Kings have now been guaranteed a last-pace finish.