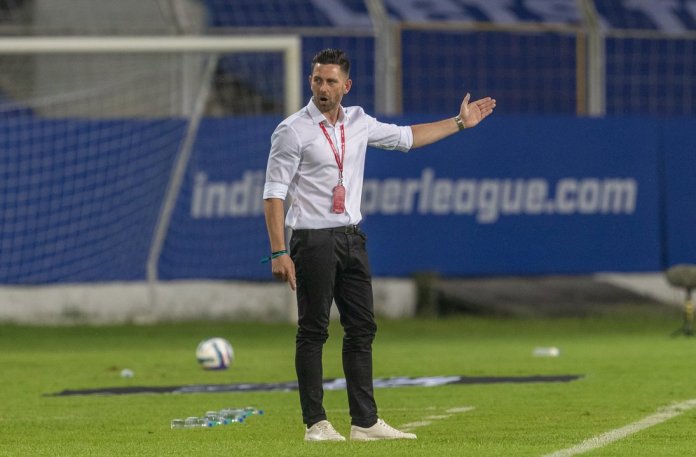 ISL Season 8: Jamshedpur FC scripted a sensational 3-2 win over defending champions Mumbai City FC in the Indian Super League on Friday night at the Athletic Stadium in Bambolim. Follow all the ISL 2021-22 LIVE Updates only on InsideSport.IN

Greg Stewart scored in the stoppage time to cancel out Diego Mauricio’s late penalty strike. The Scotsman scored a brilliant brace while Ritwik Das added the third goal for the Men of Steel. Rahul Bheke pulled one back for the Islanders whereas substitute Mauricio restored parity with a strike from the spot.

Relive the #JFCMCFC game in 📸s 🔥

Mumbai City FC head coach Des Buckingham reflected on the result as he highlighted how they did not start well and how losing a player like Ahmed Jahouh so early on in the game put them on the back foot.

“We didn’t start well and then to lose Ahmed Jahouh put us on the back foot a little bit. They went into half-time leading 2-0. We made some changes, got ourselves back into the game. It was 2-1 and then with the penalty, we should have made it 2-2. But then we managed to make it 2-2. Then we conceded a goal from a penalty with a handball in the 94th minute which wasn’t a nice feeling but I am proud of the way we fought back in the second half and we should have taken something from the game,” the English tactician shared at the post-match press conference.

The Men of Steel had a great first half as they were leading 2-0 at halftime. So when asked about his halftime talk, Buckingham added, “We needed to get more bodies behind Jamshedpur FC. They defend very well and are very aggressive. A lot of the first half we played in front of them which makes it easier for them to defend against us. With the pace of Bipin and Chhangte, we just wanted to get some support around Igor. So we went to two 10s and played one six and in the second half we managed to do that a lot more,” Buckingham revealed.

Although the loss makes it difficult for Mumbai City FC to qualify for the semifinals this season, Buckingham believes that the top four spots have opened up nicely and it is anyone’s game.

“I think it sets it up nicely. We know what we have to do in the final four games. We must go out and play the way we have in the second half in all four of those games and we come away with those results and we would still put ourselves in the position that we want,” the Englishman concluded.