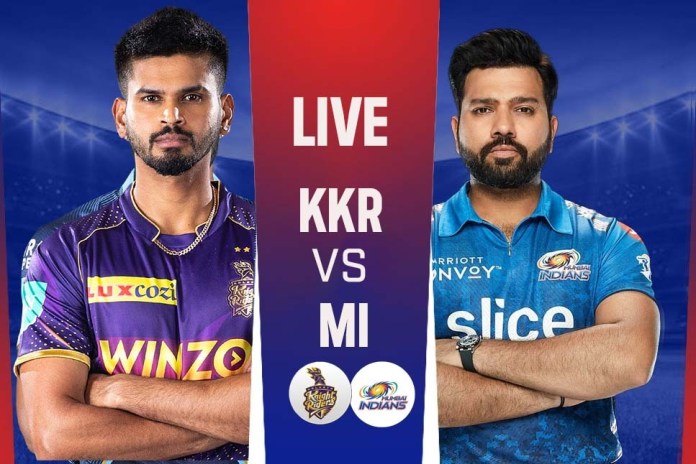 MI vs KKR LIVE score: Mumbai Indians ready to play spoilsport- Mumbai Indians could play spoilsport against Kolkata Knight Riders in their upcoming battle. Rohit Sharma-led MI are already out of the playoffs race and will be looking to improve their tally in the IPL 2022 Points Table as they look to avoid the last spot. Meanwhile, one loss for KKR could put them out of contention for a playoff berth. Follow all the IPL 2022 live score updates on InsideSport.IN

Kolkata Knight Riders (9th, 8 Points): Shreyas Iyer & Co’s playoffs hopes are all but dashed after a crushing 75-run loss to Lucknow Super Giants. Even if KKR win all three matches, they will reach a maximum of 14 points and that may not be enough.

Mumbai Indians (10th, 4 Points): The team that has won the title 5 times—most in IPL history—are lying at the bottom of the IPL 2022 Points Table. Mumbai Indians won their second game of the season by beating Gujarat Titans on Friday, but they are already eliminated from the playoffs race.

Panned for trying out too many combinations at the top, a part of their constant chopping and changing strategy this season which backfired on them pretty badly, KKR are coming off a 75-run drubbing at the hands of table-toppers Lucknow Super Giants.

While MI will enter the upcoming game on the back of a five-run win over second-placed Gujarat Titans.

MI under Rohit Sharma have already been eliminated from the race to the playoffs as they have just four points from 10 matches and even if they win all their remaining games, the five-time champions can reach only 12 points, far from what is needed to advance to the next stage.

Royal Challengers Bangalore have 12 points already and three other teams have 16 and 14 points.

Two-time winners KKR, under new captain Shreyas Iyer, came a cropper against Lucknow Super Giants on Saturday and the huge margin of defeat has left them with eight points from 11 games. They have three matches left and the maximum they can reach is 14 points, which is again something that cannot guarantee even a fourth-place finish.

However, despite the inconsequential nature of the match, players from both the beleaguered sides can still gun for individual glory at the DY Patil Stadium.

With the season coming to a close for both the teams, the focus will also be on how to go about the task in the next edition, apart from looking to capping off their hugely disappointing campaigns on a positive note.

Heading into the game, the Mumbai Indians enjoy an advantage thanks to their massive 22-8 head-to-head record against the Knights Riders.

At the moment, the best part about MI is that both their openers — skipper Rohit and Ishan Kishan — clicked together against the Titans and they would certainly look to convert their scintillating 40s into bigger scores against the struggling Knight Riders.

MI captain Rohit is also approaching a milestone as he is 88 runs away from completing 5000 runs for the franchise in the IPL, and he can very well reach the mark on Monday.

While the likes of Rohit, Kishan and Suryakumar Yadav are adept at utilising the power play, KKR have struggled to score to force the pace in the first six overs, something their head coach Brendon McCullum singled out after the big loss to LSG.

“We struggled in the power play which has been a frustration for us throughout the season. We’ve been good throughout the middle phase and not too bad at the death,” McCullum said.

Even as the KKR stare at elimination, the team will still need to find a way to be more aggressive without losing wickets in the first six overs, keeping in mind the next season and an eagerness to finish this one on a good note.

But it is easier said than done against an MI unit that has just begun to find its bearing.