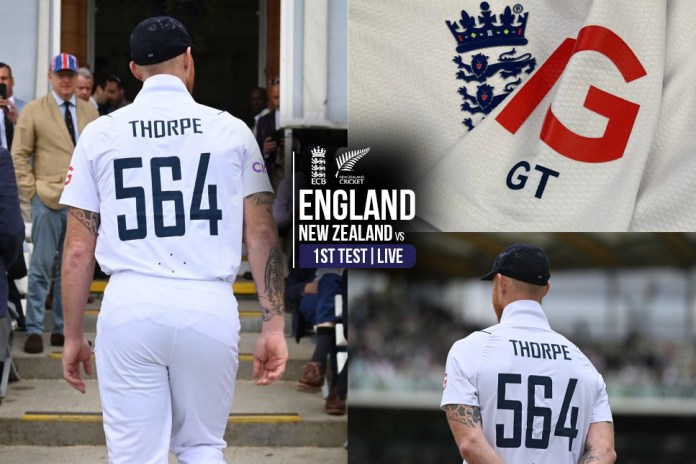 ENG vs NZ 1st Test: Follow New Zealand Tour of England Live Updates – The new Test skipper of the England team, Ben Stokes ditched the age-old tradition of wearing a blazer for the toss of a Test match on Thursday, where his team took on New Zealand at the Lord’s. Instead, he showed support to former England cricketer Graham Thorpe, who is currently seriously ill, by wearing a special shirt. Follow ENG vs NZ 1st Test live updates and New Zealand Tour of England Live Updates with InsideSport.IN.

IND vs SA Live: Head coach Rahul Dravid to be available for entire South Africa series, to leave for England on June 20

Notably, former English cricketing great Graham Thorpe recently fell ill and is now admitted to a hospital. Showing support, Stokes wore a shirt that said ‘Thorpe 564′, which was the Test cap number of the former cricketer.

This marked the very first instance where the captain of an England team did not don a blazer for a Test match’s toss. Speaking on the gesture, he said “This shirt is on behalf of me and the team to show support for Thorpey and his family. We all love Thorpey and he means a hell of a lot to us.”

Our captain has a message as he walks out for his first toss.

Meanwhile, the Professional Cricketers’ Association recently released a statement regarding Thorpe’s health, which said “Graham Thorpe has recently fallen seriously ill and is currently in hospital receiving treatment. His prognosis is unclear at this stage and we ask for privacy for him and his family at this time. Our thoughts are with Graham and his family.”