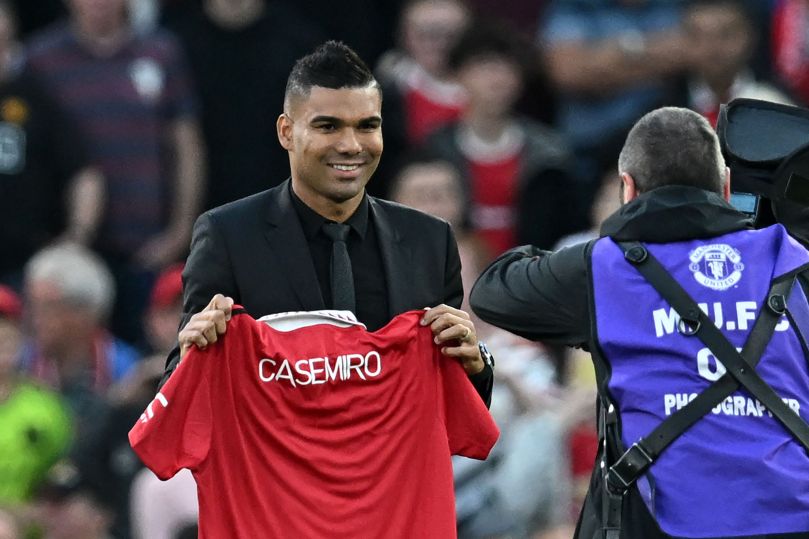 Premier League 2022-23: Casemiro Man United unveiling, Manchester United vs Liverpool – United confirmed last week an agreement had been reached with Madrid, and the reported £60million (€70m) deal officially went through on Monday. The 30-year-old bade an emotional farewell to Madrid at a news conference prior to travelling to Old Trafford for United’s clash with fierce rivals Liverpool. Follow Premier League 2022-23 news and updates on InsideSport.IN

Thank you for such a warm welcome! 🔴#MUFC https://t.co/b9c9P8zFIQ

The 30-year-old will complete his transfer from LaLiga champions Madrid to the Premier League this week after he was handed a hero’s farewell at Santiago Bernabeu.

Casemiro makes the switch to Old Trafford in a transfer thought to be in the region of £60million (€70m), as United splash the cash in the wake of a dismal start to Erik ten Hag’s tenure.

While not exactly a player in the mould of Scholes, Casemiro is expected to greatly improve United’s woeful midfield. Fans are tired of seeing the Fred and Scott McTominay partnership and the five-time Champions League winner is someone the team has been crying out for.

Premier League 2022-23: Casemiro set to be unveiled at Old Trafford ahead of Manchester United vs Liverpool

“My cycle here is finished,” he stated. “I am looking for new challenges, new goals, [to] experience a new culture, [to] live in a different city.

“I haven’t won anything there yet, I will be just another player looking to help the team. The main reason is the new challenges and wanting to do something new in my life.

“I’ve become a father here, I’ve spent nine years here. People who know me, know it’s not because of money. If it was, I would have left much earlier, but it’s not that.

“It’s my decision. The club has supported me, but people who think those things are people that don’t know me and they are wrong. The last thing I think about [is money].”

During his time at Madrid, Casemiro won 18 major trophies, including three league crowns and five Champions League titles, and his decision to step away was a hard one.