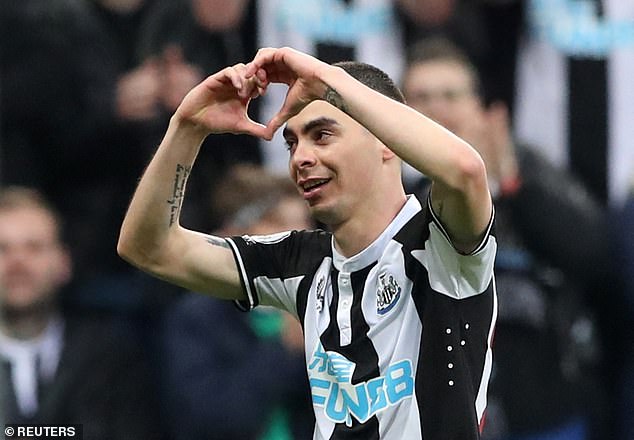 It was an evening when Newcastle’s white knight emulated the club’s knight of the realm. If Eddie Howe keeps this up, Sir Bobby Robson’s statue could one day have company at St James’ Park.

It is a remarkable run of results which has seen Newcastle, who were second bottom on only five points when Howe took over in November, hit the magical 40-point mark with five games still to go. 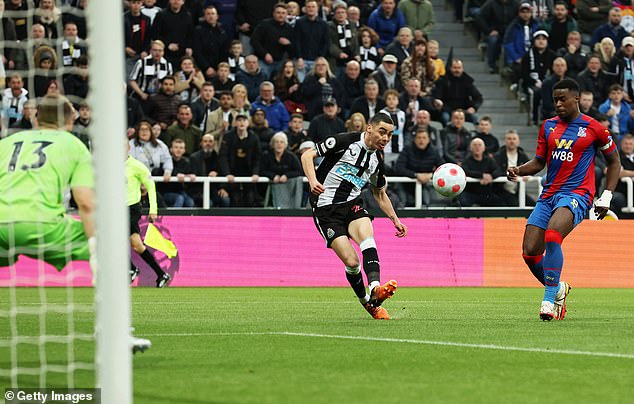 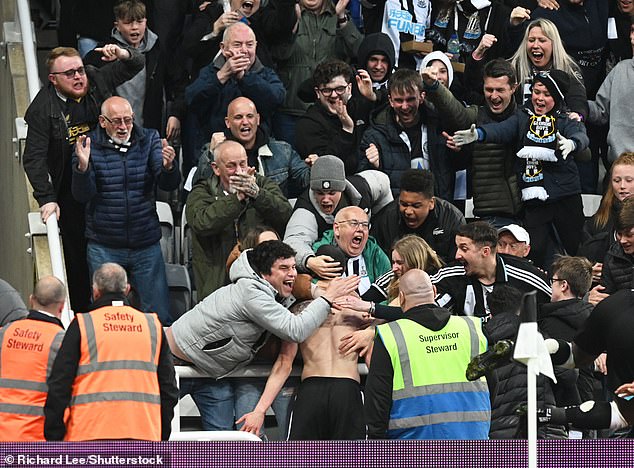 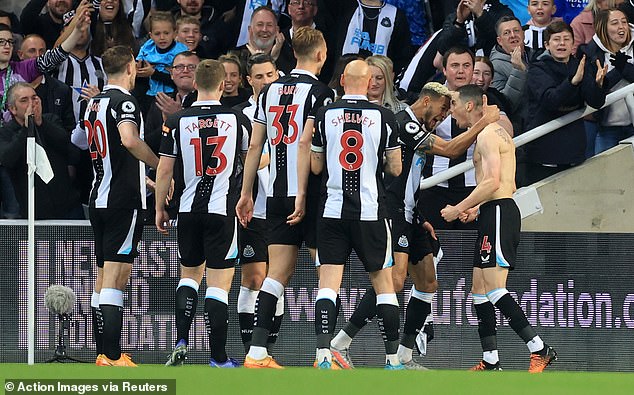 Once he returned to the pitch, the Toon’s No 24 was quickly congratulated by his team-mates

Now, rather than fearing relegation, the Magpies are eyeing up a barely believable top-half finish having drawn level on points with 10th-placed Brighton.

In doing so, they have leapfrogged Palace, who seemed to be feeling the effects of Sunday’s devastating FA Cup semi-final defeat by Chelsea.

Patrick Vieira’s side have now slumped to three straight defeats in all competitions and, although safe, their promising campaign is petering out.

Before kick-off, the Gallowgate saluted star Allan Saint-Maximin with a special display of flags which made up a giant gold No 10. And the Frenchman, who has not scored since January and has been linked with a summer move away, set about putting in a performance worthy of his pre-match tribute.

Early on, he raced past a string of Palace players across the box before shooting tamely at keeper Vincent Guaita. Saint-Maximin’s dancing feet continued to cause havoc, including one moment where he left defenders dizzy with countless steps over a stationery ball.

But even the flying forward was upstaged on 32 minutes when his team-mate Almiron ended his own 14-month goal drought in stunning style.

It came after Bruno Guimaraes, fresh from his 95th-minute winner against Leicester on Sunday, chested down a throw-in then volleyed over a pass which set Almiron tearing off down the right wing.

The Paraguayan then managed to get the ball under control and shrug off Tyrick Mitchell before curling into the far top corner.

Almiron ripped off his shirt and ran into the welcoming embrace of fans, just like he did when he netted against Palace in 2019 to end a 10-month wait for his first goal in English football.

And he fancied a second, hitting another shot soon after at keeper Vincente Guaita, before some sloppy Newcastle defending almost let Odsonne Edouard in at the other end before half-time.

Joelinton should have given Newcastle room to breathe after the break when he was picked out at the back post by Matt Targett’s free-kick but he headed down and wide.

That miss kept a poor Palace’s hopes alive, and Wilfried Zaha should have done better than drag his shot wide after being set up by Edouard.

At the start of this season, you could have bet Newcastle, who have dropped the most points from winning positions this term, would have wilted under the late Palace pressure. Yet they are a different beast these days under Howe. A record to rival Robson tells its own story.