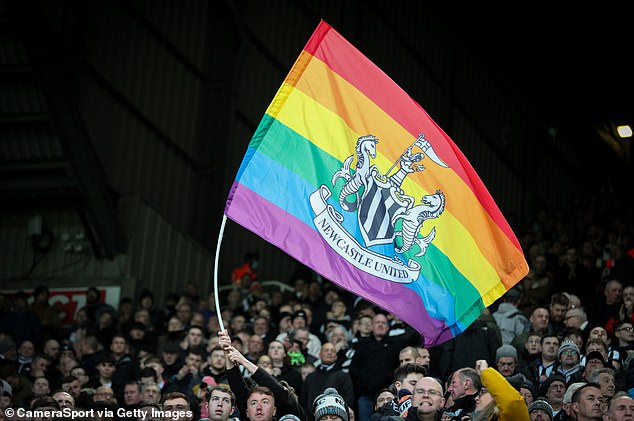 Newcastle United have been told their fans’ banners in support of the Rainbow Laces campaign must not be used to ‘try to quell the debate’ about their ownership by Saudi Arabia.

Two huge rainbow banners stretched behind one of the goals at St James’ Park on Saturday during their first victory of the season against Burnley.

‘Things aren’t always black and white,’ read one while the other declared: ‘United as one against Prejudice’.

Newcastle’s official Twitter account posted a picture of the two banners under the caption of a rainbow flag emoji and the words: ‘United as One’.

‘If it’s supporters groups working together then I applaud their allyship,’ said one member of another Premier League club’s LGBT+ fan group on Saturday.

‘Yesterday was never going to be easy for United with Pride (Newcastle’s LGBT+ fan group). I just hope the banners are not a gesture by the club to try and quell the debate about the Saudi connection.’

Newcastle’s commitment to the Rainbow Laces campaign has left many LGBT+ groups feeling uncomfortable following the club’s takeover by a consortium led by the Saudi Arabia sovereign investment fund.

Homosexuality is illegal in Saudi Arabia with gay men and women facing the death penalty while a young gay man remains imprisoned in the kingdom for posting a picture of himself on social media with his shirt off.

Opposition fans have continued to take part in the #FreeSuhail campaign at Newcastle games this season as part of the protests against the club’s ownership and human rights abuses in Saudi Arabia.

The banners at St James’ Park were put organised by Wor Flags in conjunction with United With Pride to show support to the club’s stance on Rainbow Laces and to commend them for their own support of Josh Cavallo, the Australian footballer who came out as gay in October.

‘Over the past week we have seen the club take part in the Rainbow Laces campaign and, before that, we were glad to see them voice their support for Josh Cavallo,’ Wor Flags said last night.

They added the banners were ‘a message of support to the club for their participation in these campaigns, a statement of solidarity with Josh and any others who may be afraid to be their true selves and a message to all LGBTQ+ fans we will do our part to ensure St James’ Park is a safe and welcoming place for everyone.’ 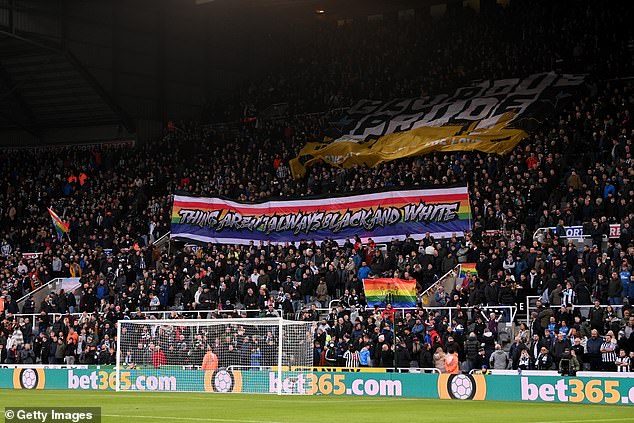 Stonewall, the charity behind Rainbow Laces, had encouraged Newcastle to be a part of the campaign but also urged for it not to be an example of ‘rainbow-washing’.

‘We think Newcastle should take part in the Rainbow Laces campaign — what’s important is that they move the conversation forward, not brush the situation under the carpet,’ Stonewall director of programmes Liz Ward recently told The Mail on Sunday.

Meanwhile, the homophobic outburst by Egypt icon Mohamamed Aboutrika has left LGBT+ individuals in the Middle East fearing for their lives.

Aboutrika, who made 100 appearances for his country, launched an offensive tirade on beIN Sports last week in which he criticised the Premier League’s Rainbow Laces campaign and called homosexuality a ‘dangerous ideology’ that was ‘against humanity’.

The former forward urged Muslim players to boycott the campaign and believed people must ‘stand up’ to homosexuality.

The Mail on Sunday has learned that Aboutrika’s comments has left LGBT+ individuals in Egypt, who already have to keep their sexuality secret, feeling more vulnerable and at risk.

Much of this is due to Aboutrika’s status as a hero in Egypt which has allowed homophobic views to be weaponised. The #we_support_aboutrika has trended with scores of homophobic messages in support of the former player.

BeIN Sports, who are the Premier League broadcaster across the Middle East, say they have disciplined Aboutrika and while they would not give details of his punishment insist this kind of outburst ‘would not happen again’.

The broadcaster have faced criticism for allowing Aboutrika the platform to speak uninterrupted for more than two minutes, where he used his belief in Islam as justification for his homophobic views. 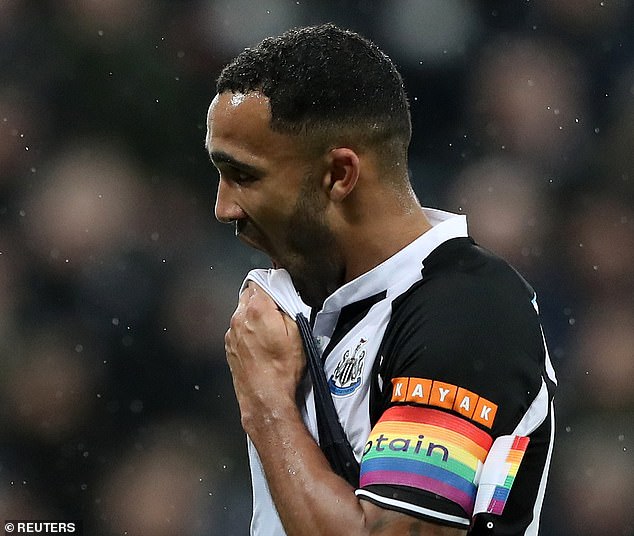 BeIN argue that Aboutrika’s horrific monologue was a result of their dedication for giving coverage to the Rainbow Laces campaign despite it being illegal in many of the countries to which they broadcast.

They insist they will continue to do so despite Aboutrika’s pleas for them to stop.

The Premier League were quick to condemn the views saying: ‘We wholeheartedly disagree with the pundit’s views. The Premier League and its clubs are committed to supporting LGBTQ+ inclusion and making clear football is for everyone.’

‘Why do ignorant people think that people like me ‘chose’ to be gay? He has chosen to be a homophobe and a vile one at that.

‘Hiding behind his faith, which I do not feel he properly represents, and baring to his audience his total ignorance of how LGBT+ people feel and suggesting we somehow have a disease or we chose to be the way we are and who we love is beyond pathetic in the 21st Century.’

BeIN were not the only broadcaster to face criticism during the opening week of Rainbow Laces after Sky Sports showed an advert for Saudi Arabia’s tourist board during half-time of Manchester United’s Super Sunday game against Chelsea.

The advert encouraged people to travel to Saudi Arabia to ‘feel a welcome you’ve never felt’ despite their treatment of LGBT+ individuals.

A Sky spokesperson said: ‘Rainbow Laces is a cause that Sky has always supported alongside our sporting partners, forming part of our editorial coverage on live sport and also our rolling news channel. Advertising is completely separate and subject to regulations and guidelines set by the ASA and Ofcom.’