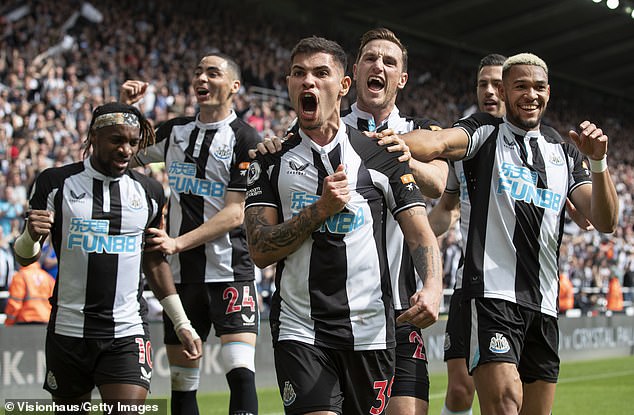 Bruno Guimaraes was on an Air France flight to Rio de Janeiro in January when his phone would not stop buzzing. He was having trouble answering, but did not want to be disturbed anyway.

‘I was watching the Vikings series on TV,’ says the Brazil midfielder, then of Lyon. ‘I was going home to play for the national team. There was wi-fi on the plane and I was receiving repeated calls from my agent.

Bruno pressed pause on his favourite historical drama and replied with an affirmative, ‘Yes!’. He has been flying ever since. 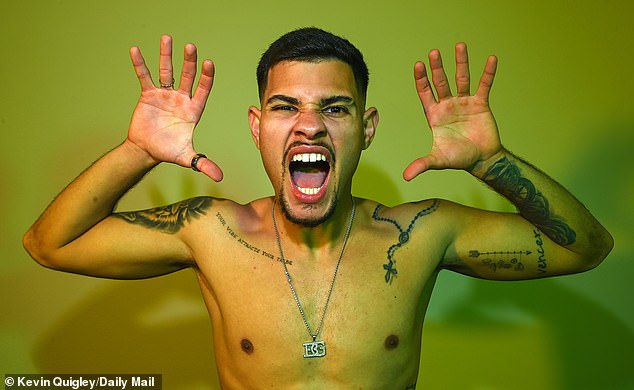 A roar-some start: Guimaraes was giving an exclusive interview to Sportsmail’s Craig Hope

Twisting his upper torso and extending his right leg behind him, Bruno is attempting to recreate his first goal for Newcastle. He is doing so from the comfort of a training-ground sofa but, for anyone else, it looks anything but comfortable.

Even though he is just eight weeks into his English lessons and a Portuguese translator sits with us, he takes great pride in using his new language skills to relive that moment, an airborne back-heel volley in a 2-1 win at Southampton.

‘When I saw the ball, I think, “Only this way with my foot I can touch it. So, I will try”. I could not see the goal. I only listened to the fans, “AARRGHH”. Then, I realise… goal!’

For audacity, maybe. But not, agrees the £42million club-record buy, for sheer joy. That came two weeks ago when his diving header in the 95th minute in front of the Gallowgate End snatched a 2-1 victory over Leicester. It was his second of the afternoon and the first time his pregnant girlfriend, Ana, had ever seen him score. You begin to wonder if those English lessons also include scriptwriting.

I tell him that, on 90 minutes, I remarked to a colleague in the press box, ‘Bruno needs to come off, he’s done’. There is a child-like charm to the 24-year-old’s high-pitched cackle, for he knows the last laugh belonged to him.

‘I was so tired. It was really hot. I had been saving my last fumes, my last gas. I was waiting for it. I thought, “I just need one ball, to score or make an assist”. So, when Joe Willock took off down the line, I gave my last bit of energy to reach that ball.’ 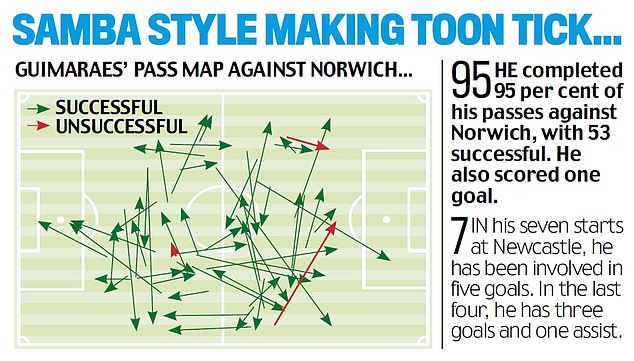 Bruno was 30 yards behind Willock at the onset of the break. To television viewers, it looked as if he had appeared from another channel when, arriving in the goalmouth, he flung his weary body at Willock’s cross. He understands the English when I say, ‘I thought you’d end up a hero or collapsed in a heap’.

‘Me too!’ he replies, beaming. In fact, the twinkle never leaves his eye. ‘When I scored, it was such a special moment. I will remember this for all my life long.’

He reverts to Portuguese – to the relief of the translator, concerned about his future employment prospects – as he adds: ‘I have also been joking with my girlfriend, because I had never scored when she’s been in the stadium. That was the first time – and now I have three!’

The third of those – his fourth goal in seven starts for Newcastle – came during last weekend’s 3-0 win at Norwich, an impudent dink over Tim Krul. So enthused are his family, including dad, Dick, and mum, Marcia, that even a trip to deepest Norfolk is embraced.

It was there that Bruno donned a black-and-white ‘magic hat’ during celebrations in front of the Toon Army. He has heard their tribute, ‘Bruno’s f*****g magic, he wears a magic hat, he could’ve signed for Arsenal, but he said ‘no f*** that’. He wants to play for Eddie in the famous black & white, and when we win the Premier League we’ll sing this song all night’. 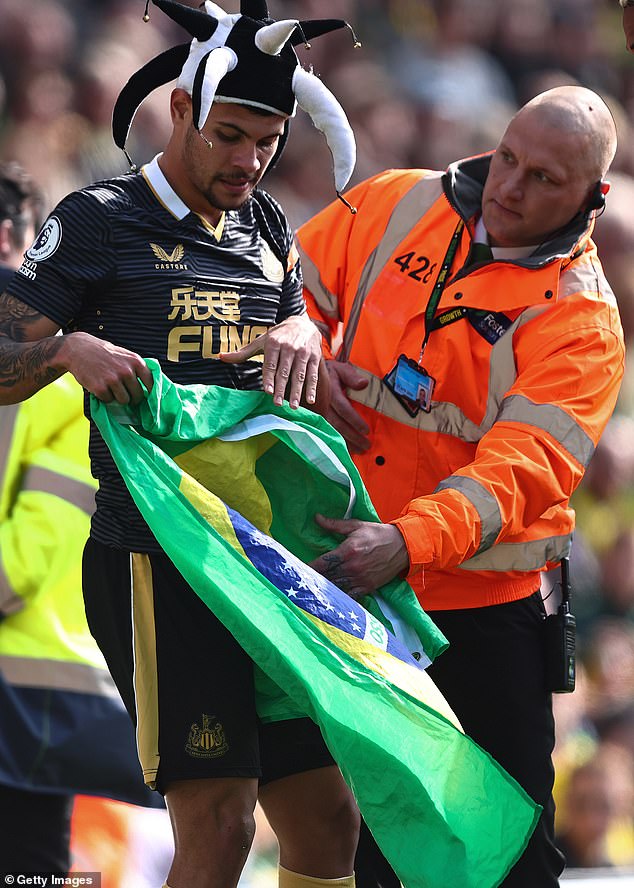 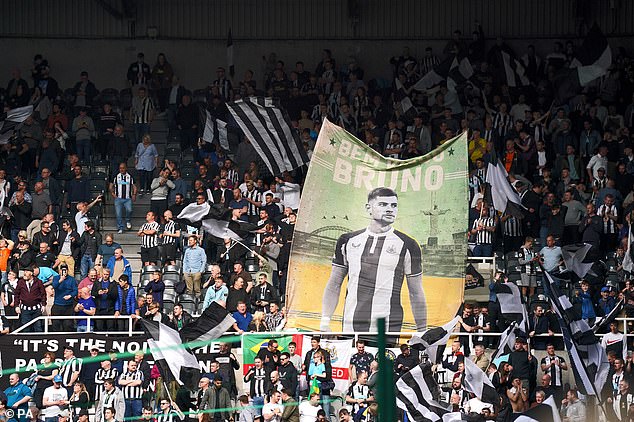 Some have already created a banner for him in green and yellow, the colours of the Brazil flag

He prefers not to sing it now, but confesses to furthering his English by belting it out at home.

Bruno, it would seem, likes everything about his new life on Tyneside. There have been dog walks on the Town Moor – ‘It is cold, but they’ll get used to it’ – and, on day one, he sought home comfort at the Rio Steakhouse in Jesmond. He assumed it would be a Brazilian hangout.

‘I could not believe it – within two minutes I had taken 10 photos,’ he says, gesturing a selfie. ‘It was amazing. I thought, “This is very special, so different”. I love that passion, that connection with the fans.’

Eddie Howe calls him ‘an incredible guy’ and team-mates have been taken by his infectious personality. It helps, of course, that he can play – his stats show him to be the best midfielder in the country on current form.

There is confidence but not arrogance, even if the tattoos on his left arm read, ‘God created me to win’ and ‘Everything that is possible strengthens me. I have no fear’.

He certainly betrays no nerves during this, his first newspaper interview since arriving in England. 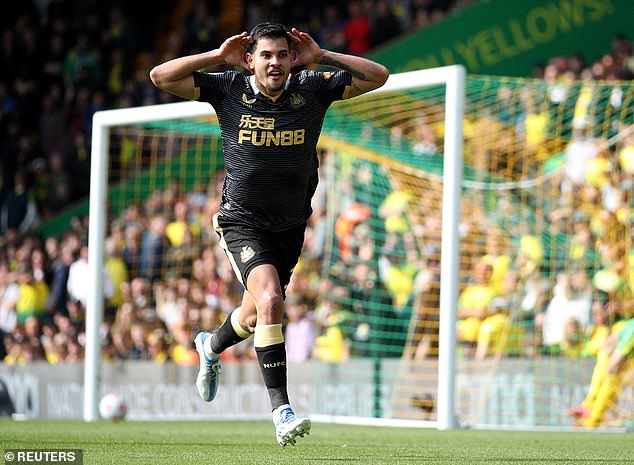 When it comes to taking some pictures, he is bare-chested as he screams down the lens, mimicking the hands-behind-ears celebration that is now commonplace on playgrounds across Newcastle.

‘I had never done it before. Only now, and I don’t know why!’ he says.

What Bruno does know is that he would not be here if he did not believe in the project sold to him by Howe and the club’s Saudi-backed owners.

At lunchtime on Saturday, Newcastle entertain quadruple-chasing Liverpool, including his compatriots Alisson, Fabinho and Roberto Firmino. So, is he out to ruin his friends’ title chances?

Given a form table of the last 14 Premier League games shows only Liverpool and Manchester City ahead of Newcastle, such hopes are far from forlorn.

At his unveiling, Bruno revealed he joined Newcastle to win the Champions League. I put it to him that he could have taken a shortcut and tried to sign for a club like Liverpool. He certainly seems good enough. 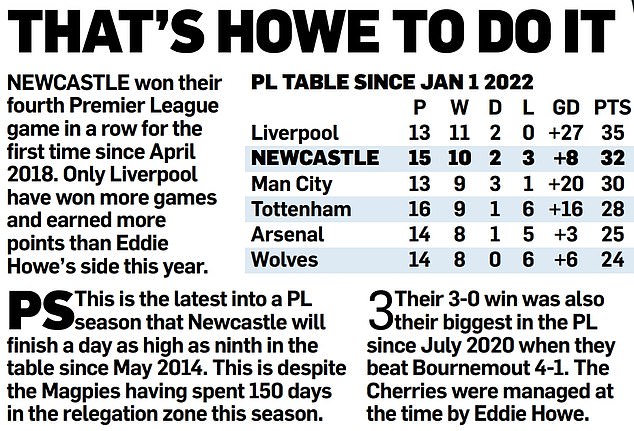 Bruno’s first memory of playing football in his Sao Cristovao neighbourhood north of Rio de Janeiro is not a good one. He had cried to be allowed to swap swimming for football but, at his first session aged six, he was again in tears.

‘I got a ball whacked in my face,’ he says, and at least he is laughing now. ‘I cried, a lot. My mother entered the pitch and took me home!’

He was only pushed towards sport on medical grounds. Aged one and then again at three, he contracted pneumonia.

‘From what my parents tell me, it was very serious and a difficult time for them. At four, I was prescribed to do sport to improve my lung and heart function.

‘I was first put into swimming but I didn’t like it. I said, “Mum, please, I don’t want to swim. I want to play football”. So, they put me into a football academy, and that was when my love started.’

Come his eighth birthday, Bruno was back in hospital. This time, though, his parents were less sympathetic.

‘I was on the beach with my friends. We started playing among the rocks. I fell and hit my head. I had to go to hospital and have four stitches. I got a really big telling-off from my dad, “Why did you do this?”. I said, “Dad, we were only playing, and I’m the birthday boy!”.’

I later ask Bruno if he has ever had a near-death experience because, well, he seems like the sort of guy who wouldn’t just say ‘no’. 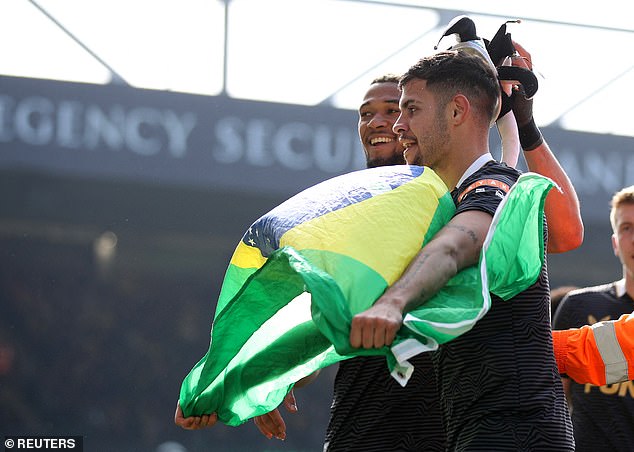 Although an only child, Guimaraes says he has found a ‘brother’ in compatriot Joelinton

‘Yes!’ he replies. ‘Given the telling-off from my dad, when I hit my head on those rocks!’

Reprimand apart, his upbringing holds nothing but fondness and, every year, he makes donations to help people in his hometown.

‘I had a wonderful childhood. I would be going fishing with my friends, flying kites, playing football on the street. I would do it all over again. I really hope that my son or daughter has the same happiness.’

Come the age of 15 and after a string of rejections from clubs in Rio, he joined the academy of Sao Paulo-based minnows Audax, where he earned £100 a month.

‘Enough to pay for my mobile phone bill,’ says Bruno, who would spend evenings talking to his parents.

They would drive 250 miles through the night in Dick’s taxi – Marcia worked in a motorcycle dealership – to watch their only child play on a Sunday morning. It was his father who insisted Bruno did not give up football in preference for futsal, his first love. Watch his goal against Norwich – controlling the ball with his studs – and Bruno attributes that technique to futsal. He even jumps to his feet to demonstrate.

By 19, those skills had taken the attention of top-flight Athletico Paranaense. And here came a twist of fate, when the club assigned him squad number 39.

It is the shirt he then wore at Lyon and now at Newcastle. Although, the frequency with which its origin is mentioned has become a family joke. 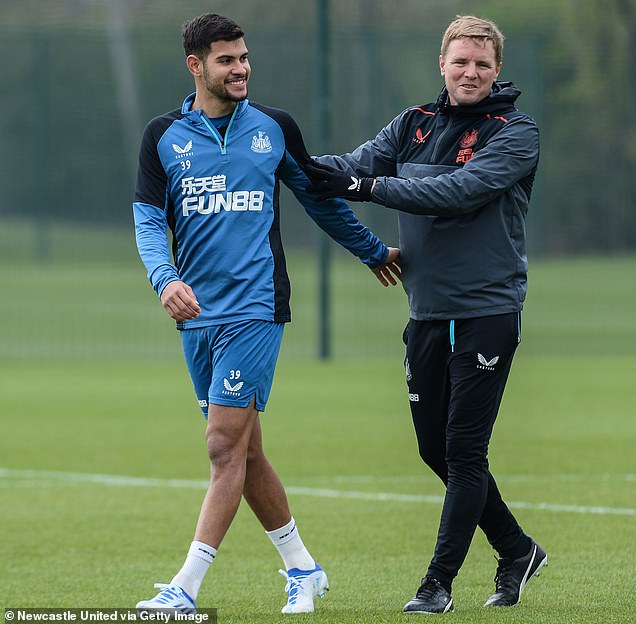 The 24-year-old says he wants to be at Newcastle a ‘long, long time’ – and fans will hope so to

‘Every time the commentator talks about my dad’s taxi, we laugh. But it is also very important to us – we love that number.’

The love for his parents, who have moved to Newcastle, is also very evident.

‘They are proud of my career. In the difficult moments, when I thought about giving up, they stopped me. I don’t think I would be a professional footballer without their support.’

Bruno may be an only child, but he feels he has found a sibling at his new club.

‘Joelinton, he is my brother!’ he says of his fellow Brazilian and scorer of the other two goals at Carrow Road. There is even talk of him joining Bruno at the World Cup in Qatar.

‘I hope so!’ says Bruno. ‘He has helped me, a lot. I am so happy for his moment. After Norwich, on the pitch with our flag, it was so special. I hope we can make this happen here for a long, long time.’

So, too, do supporters of Newcastle.