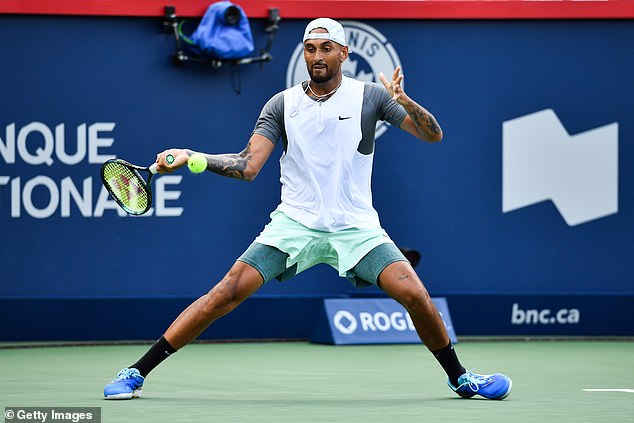 Nick Kyrgios has continued his blazing run of great form with a rollicking three-set victory over world No.1 Daniil Medvedev in Montreal.

After losing the opening set in a tiebreaker, Kyrgios had to dig deep and turned the match around with one incredible backhand pass to break Medvedev in the sixth game of the deciding set.

He broke the dispirited Russian for a second straight service game before closing out the match to love after exactly two hours. 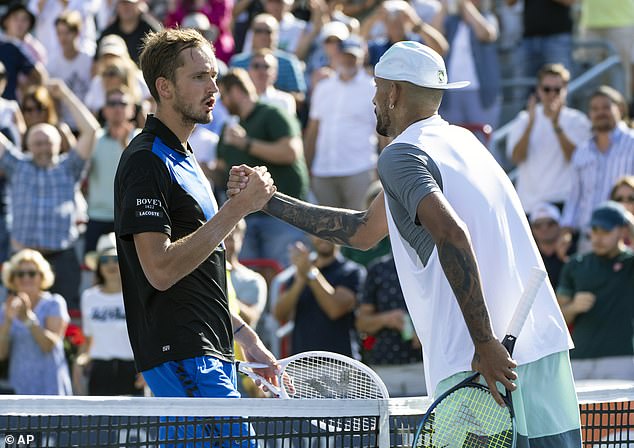 The stirring victory was Kyrgios’s third from four meetings with Medvedev, 14th win from past 15 matches and second ever over a world No.1 – eight years after conquering Rafael Nadal on his Wimbledon debut as a teenager.

The Aussie showed his thoughts are with his sick mother Norlaila, who is ill in hospital, when he wrote ‘Be strong Ma’ on a TV camera after the win.

‘It’s hard because even travelling now, my mum is in hospital at the moment, my dad hasn’t been very well, my brother just had a baby and I don’t get to be there with my family when normal people would like to be with them,’ Kyrgios said.

‘It’s hard being from Australia because we can’t travel back and forth. There’s a lot of things people don’t see. They only see me winning, losing, throwing a racquet, doing those things. They don’t really understand the challenges that I face or what people on tour face, what’s going on in their personal lives.’

‘I’ve had some success against him in the past and he’s beaten me before so I feel like we know each others’ games well,’ Kyrgios said. 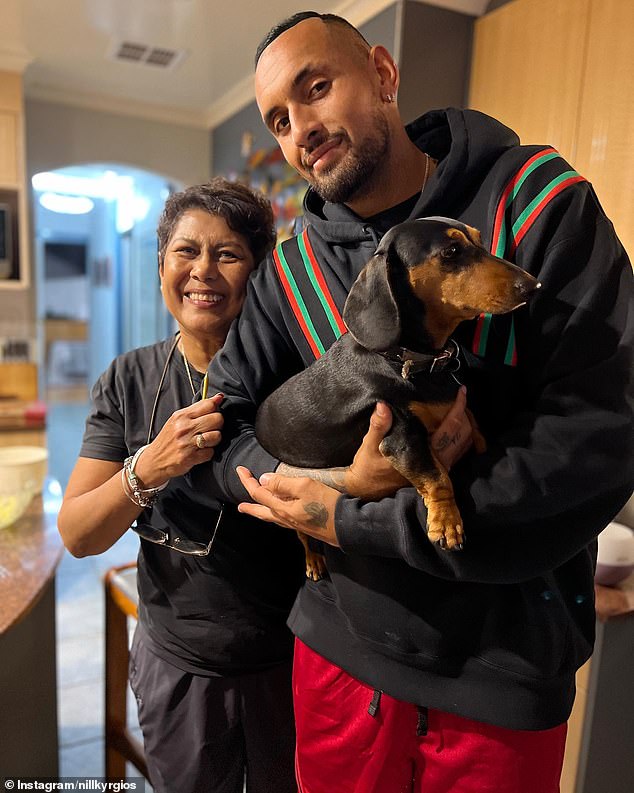 Kyrgios is desperate to see his ill mother and father, and to meet his brother’s baby back home in Australia. ‘I don’t get to be there with my family,’ he said after the match 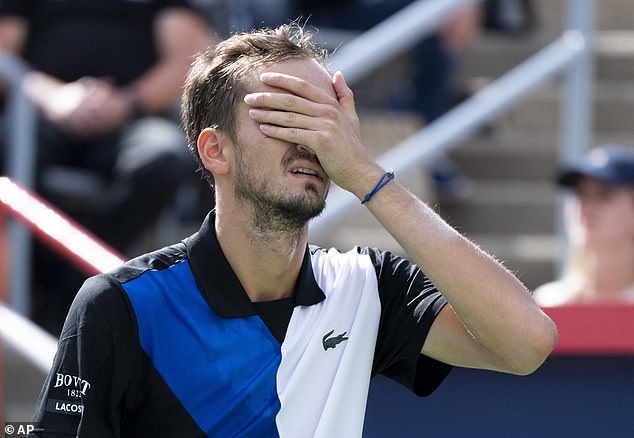 Medvedev grimaces as he blows his first-set lead against Kyrgios. The pair last played a controversial match at the Australian Open that saw the Russian blast the crowd for having ‘low IQs’ after he was heckled

‘I’m not the type of player who goes into these matches looking at rankings or anything like that.

‘It’s just who I’m playing and what kind of ball they’re giving me and today I had a very clean objective of how I was going to play – a lot of serve and volley, a lot of aggressive play from the back – and I executed better than he did on the day.

‘That’s all it came down to. He won the first set and I feel like I had opportunities there as well so hopefully I can keep this rolling.’

Aussie tennis great Renae Stubbs was full of praise for Kyrgios after the win, tweeting: ‘I mean when he plays tennis and keeps his s**t together, he is seriously close to the best tennis player in the world.’

She was joined by former American star Andy Roddick, who told Forbes the Australian is ‘into the top two, maybe three, favorites for the US Open’.

Kyrgios, who faces Australian No.1 Alex de Minaur next for a quarter-final spot, isn’t getting carried away despite firming as one of the US Open favourites following his rousing victory over last year’s Flushing Meadows champion.

‘Look, a grand slam is much, much different to any other tournament,’ he said.

‘If I was in this position of a grand slam, you’ve still got to win another set and that’s not easy at all. He’s a machine. 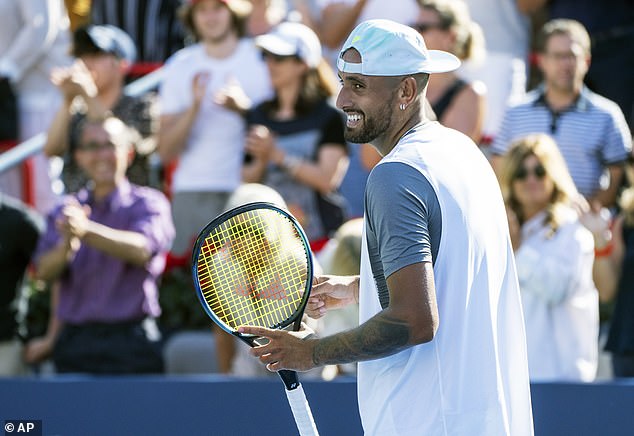 Kyrgios’ triumph has him primed for a run at the US Open, which begins on August 29

‘He’s the best player in the world for a reason and at a grand slam he’s a totally different beast.’

Nevertheless, Kyrgios continues to make a mockery of the rankings and the 27-year-old’s latest triumph all but secured the Canberran an all-important seeding for the New York major starting on August 29.

‘Look, I feel confident in my body and my mentality going in to the US Open but at the same time there’s so much time between then and now,’ Kyrgios said.

‘I’ve got to focus on this event and then Cincinnati. There’s so many things I’ve got to look forward to. I’m not even going to think about the US Open right now.

De Minaur set up a first-time meeting with Kyrgios with a 7-6 (7-4) 7-5 second-round win over Bulgarian Grigor Dimitrov, the 15th seed.