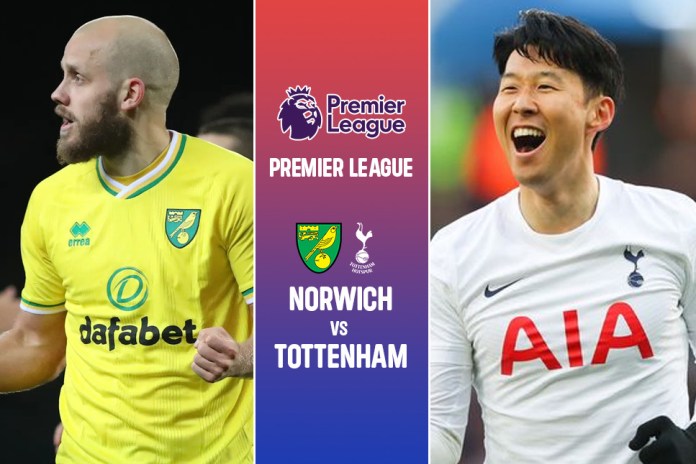 Norwich boss Smith has confirmed that Mathias Normann is fine to feature despite coming off with a knock at Molineux, but Billy Gilmour (ankle) and Ben Gibson (back) will both need to be assessed.

Andrew Omobamidele, Adam Idah, Kenny McLean, Joshua Sargent, Ozan Kabak and Christoph Zimmermann will all miss the final day of the season through their various injury woes, but Smith will be loath to make too many changes after a strong showing against Wolves.

Should Gibson be ruled out, Norwich would likely have to revert to a back four, while Lukas Rupp is waiting in the wings if Gilmour is not deemed fit enough to feature.

Cristian Romero‘s hip injury was expected to keep him sidelined for the remainder of the season, but Conte has not ruled out the possibility of the Argentine being available here.

However, Japhet Tanganga, Oliver Skipp, Sergio Reguilon and Matt Doherty are all still on the road to recovery, and Conte will be expected to stick with his settled starting XI for Sunday’s game after a reassuring update on the ill Kane.

A brace for Kane would see him become the outright top scorer on the final day of the Premier League season with 10, while Son Heung-min will aim to take advantage of Mohamed Salah‘s injury woes to clinch the Golden Boot – the South Korean currently boasts 21 strikes compared to Salah’s 22.

Norwich vs Tottenham Hotspur LIVE: When and where to watch the live streaming of Premier League matches?

When will Norwich vs Tottenham Hotspur kick off in the Premier League? – Date
NOR vs TOT match will be played on 22nd May 2022

What time will Norwich vs Tottenham Hotspur kick off? Time
NOR vs TOT will begin at 8:30 PM IST

Where will Norwich vs Tottenham Hotspur be played? – Venue
The game will kick-off at Carrow Road

Premier League: Who will be the Match official? Referee
Chris Kavanagh will be in charge of Norwich vs Tottenham Hotspur

Which TV Channel will telecast Norwich vs Tottenham Hotspur live?