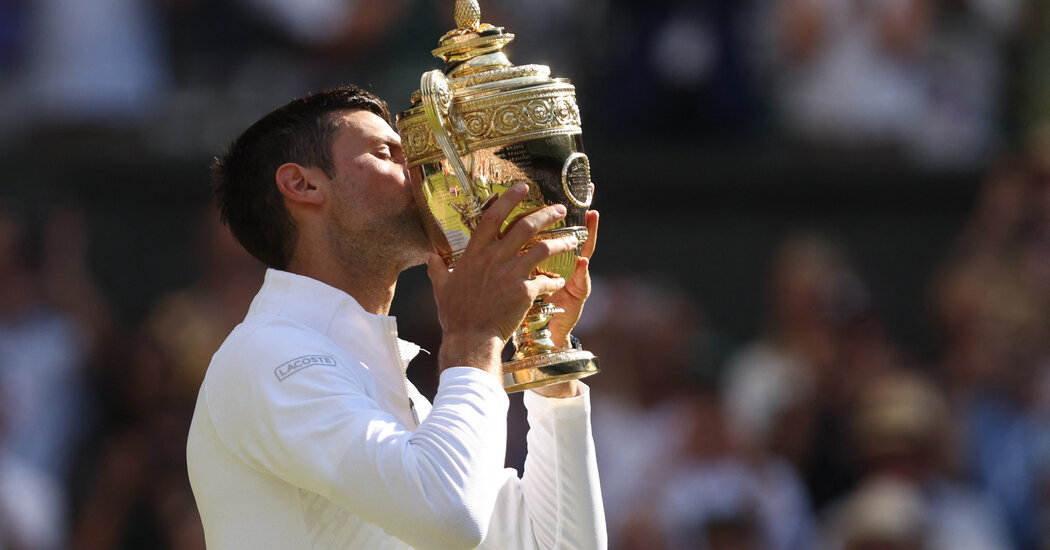 Kyrgios, playing in his first Grand Slam final, was the better player early, outplaying Djokovic in every facet of the game. But as he so often does, Djokovic figured out the small ways he could get the best of the often erratic Australian on those essential points that decide a tennis match as tight as this one.

Those came in the fourth-set tiebreaker, as Djokovic moaned his way through the rallies and induced Kyrgios into four straight errors to take a 6-1 lead.

On his third match point, Djokovic pushed Kyrgios into the back of the court and watched one last backhand hit the net. He raised his arms, and as he has so many times before, took a taste of the Centre Court grass in celebration.

In the long history of this tournament, there have been finals with more storied champions and players far more beloved than Djokovic and Kyrgios, but it’s unlikely there has ever been one that presented a greater contrast in styles, in tennis résumés, in personality and even in their approaches to tennis and life.

Djokovic, 35, entered the match seeking his 21st Grand Slam title, second only to Rafael Nadal, who has 22. (Roger Federer, who will turn 41 next month and is recovering from knee surgery, has 20. Last week, he pledged to try to come back to Wimbledon for one last time.)

Kyrgios had never even made a Grand Slam semifinal until last week. He still has not played in one because Nadal withdrew from the tournament with an abdominal tear the day before their semifinal match.

The final brought an irresistible-force-meets-immovable-object feel to this prestigious championship. Djokovic was 10-1 in five-set matches at Wimbledon. Kyrgios had never lost one. Djokovic has a winning record against nearly every top player, except Kyrgios, who had not lost a set to him in their two matches.

This is a developing story. Please check back for updates.