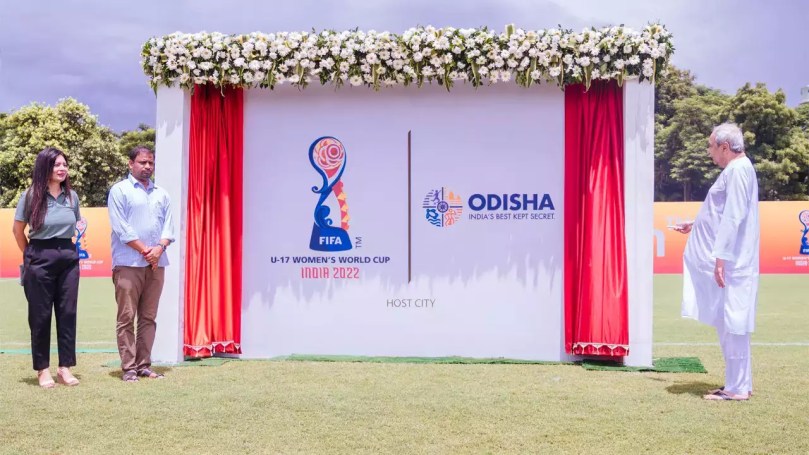 The event, attended by members of India’s U-17 women’s team, also saw the launch of a special 35-Day #KickOffTheDream Football Carnival 👏 pic.twitter.com/R3TUi3fbyY

Expressing delight at the launch event, Patnaik said, “Odisha is emerging as a leading sports destination and hosting the FIFA U-17 Women’s World Cup India 2022 is a momentous opportunity for our state.” The official host city logo launch of Odisha is an important milestone which also signifies the progress of women’s football, he said.

“We are excited to host the best young female footballers from across the world and especially, the Indian team who will be playing all their group stage games at the Kalinga Stadium,” said the Chief Minister. As the Indian team makes its first appearance in a FIFA women’s competition, he encouraged the people of Odisha to show their support in strong numbers at the stadium.

The official host city logo of Odisha is a composite that presents the official emblem of the FIFA U-17 Women’s World Cup beside a specially-designed artwork that showcases the rich cultural heritage, vibrant sporting ecosystem and overall splendour of the state.

Project directors of the Local Organising Committee (LOC) for the tournament, Ankush Arora and Nandini Arora, also conveyed their sentiments of gratitude, while encouraging the people to visit the Kalinga Stadium in Bhubaneswar.

On the occasion, a special initiative for school children called the ‘Kick Off The Dream Football Carnival’ was also inaugurated.

The ‘Kick Off the Dream Football Carnival’ will engage nearly 60,000 school children over 35 days and conclude on October 17, 2022.