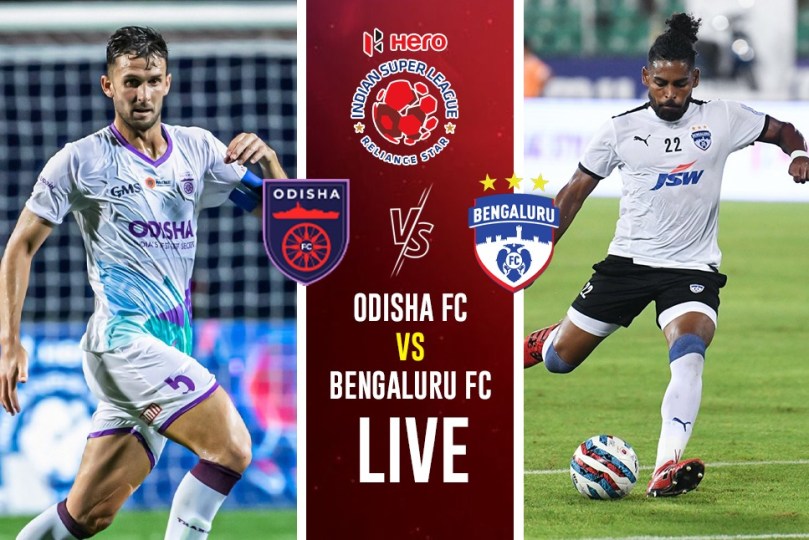 OFC vs BFC LIVE: Odisha FC vs Bengaluru FC LIVE: ISL 2022 LIVE: Odisha FC and Bengaluru FC will meet at the Kalinga Stadium on Thursday (October 27th) in Odisha’s second home game of the season. After winning two of their first three matches, high-flying Odisha will try to keep their winning streak going against Bengaluru on their home field. Bengaluru FC, on the other hand, has had a bumpy start to the season, with one victory, one draw, and one loss – the latter coming in the most recent encounter. They want to re-energize their campaign by winning this game. Follow Indian Super League and ISL 2022-23 LIVE Updates on InsideSport.IN.

Odisha played Jamshedpur in their debut ISL game after reaching the quarter-finals of the Durand Cup 2022. Despite losing 0-2 at one point in the game, the Kalinga Warriors made a tremendous comeback, winning 3-2 thanks to a Diego Mauricio brace and an Isaac Vanlalsawma brace. The second encounter, against Mumbai City, was the polar opposite, with Gambau’s squad losing 0-2. However, in their most recent game, they defeated Kerala Blasters 2-1, due to goals from Jerry Mawihmingthanga and Pedro Martin.

Grab your seat as @OdishaFC are gearing up to take on the @bengalurufc on Oct 27 at the iconic #KalingaStadium.🏟️

Bengaluru had to fight hard against NorthEast United in their first game until Alan Costa scored in the 87th minute to give them all three points. Grayson’s squad gained the lead again in their second encounter against Chennaiyin, but Prasanth Karuthadathkuni’s goal forced them to settle for a 1-1 tie. In their most recent encounter, the Blues faced the reigning champs in Hyderabad. Bengaluru performed well to maintain the score at 0-0 for much of the game until Bartholomew Ogbeche scored the game-winning goal for the Nizams in the 83rd minute.

When it comes to head-to-head records, Bengaluru has the upper hand. These two teams have previously met six times, with the Blues winning four of them. Odisha has only won once, with the other match ending in a draw. The Blues defeated the Kalinga Warriors 2-1 in their last match. Danish Farooq and Cleiton Silva scored for them, while Nandhakumar Sekar scored the lone goal for Odisha.

Though Gambau might deploy the same starting XI from the Kerala Blasters game, considering how well his team performed in that game, there is still potential for development in one or two areas, most notably in their midfield. Isaac may have scored in the first game, but he struggled against the Tuskers. As a result, he might be replaced by Raynier Fernandes in this game. Fernandes’ experience might be useful against a good Bengaluru team.

Grayson, on the other hand, is anticipated to make several changes to his lineup following a dismal performance against Hyderabad. After recovering from an injury, Fijian attacker Roy Krishna will be eligible for selection, and he is anticipated to replace Sivasakthi Narayanan. To keep the number of foreign players at four, the former Leeds United boss might replace Aleksandar Jovanovic with Wungngayam Muirang. In addition, Jayesh Rane and Namgyal Bhutia may be replaced by Rohit Kumar and Prabir Das, respectively.

What time will the Odisha FC vs Bengaluru FC begin?

Which TV channels will broadcast the Odisha FC vs Bengaluru FC match?

How to watch the live streaming of the Odisha FC vs Bengaluru FC match?

Odisha FC vs Bengaluru FC match will be live-streamed on Disney+ Hotstar.