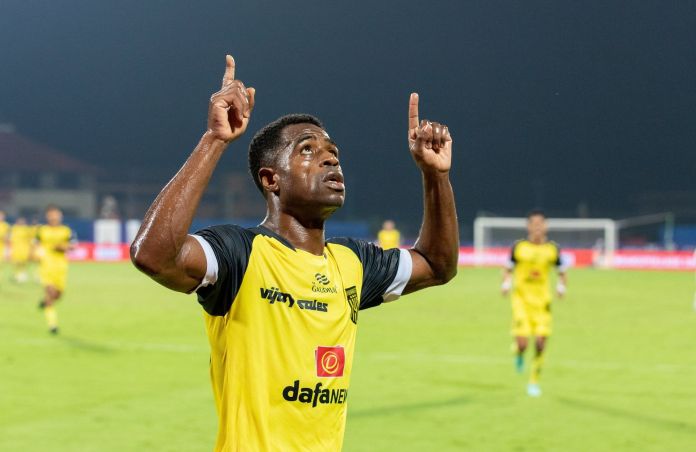 ISL Season 8: Indian Super League’s all-time highest goal scorer Bartholomew Ogbeche feels there will be added motivation for Hyderabad FC when they face ATK Mohun Bagan in their second-leg semifinal on Wednesday, as they have a chance to play in front of spectators if they reach the summit clash of the tournament. Follow ISL Season 8 updates on Insidesport.IN

ISL Season 8: Fans set to have a great experience as they return to the stands for the ISL Finals after 2 seasons

ISL organisers FSDL had announced the return of fans back to the ground for the final at the PJN Stadium at Margao on Sunday. The Goa government has permitted 100 percent use of the seating capacity, allowing ISL to open the doors for fans for the first time in two years.

Ogbeche, who has scored 18 goals this season, is on the cusp of featuring in the summit clash with Hyderabad FC taking a commanding 3-1 lead over ATK Mohun Bagan in the first leg of their semifinal clash. The Nigerian striker is the all-time leading scorer in ISL history with 53 goals.

Speaking on the return of fans, Ogbeche said, “It is going to be awesome. It will be an additional motivation for us. We’ve missed the fans immensely. Just the thought of having the fans back in the final motivates us.”

Currently in his fourth ISL season, having represented NorthEast United, Kerala Blasters and Mumbai City previously, the former Paris Saint-Germain striker rated ISL fans as one of the best in the world.

“I think they are one of the best fans in the world. So passionate and die-heart. It is unfortunate that we had to go through tough times for the past two years. The well-being of fans and players is paramount, that is the reason why we have been playing behind closed doors,” he said.

“Honestly, having the fans back is something that I cannot wait for. We don’t need any further motivation to play. I hope we reach the final, feel their warmth and support and their presence will be an honour for us.”

ISL Season 8: The first phase of tickets for the ISL final, which was put on sale Saturday onwards, was sold out within 21 hours. Each ticket holder has the chance to claim a commemorative digital collectible of the final match ball as part of the fan experience.

Ogbeche said he was delighted with the two-goal advantage Hyderabad have over ATK Mohun Bagan.

“We still have the return leg so our battle cry has to be humility and that is it for now. The first half in the first leg did not go according to plan. I think we respected the opposition a bit too much, gave them too much space and freedom. We came out in the second half and took the game to them. We are just happy with the lead now.”