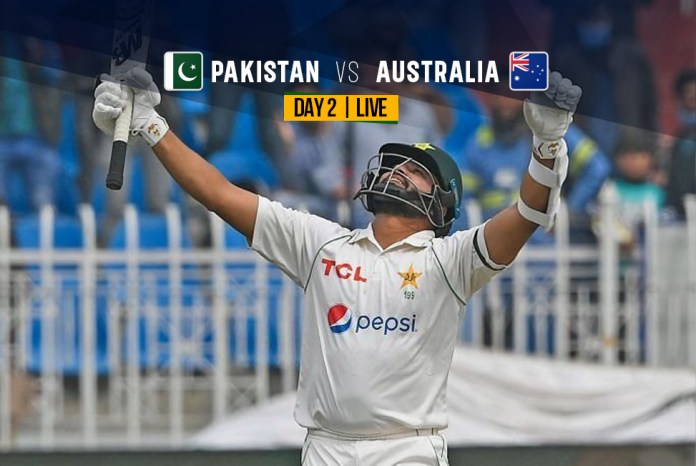 PAK vs AUS LIVE: Azhar Ali scored a brilliant 185 to take Pakistan past 400 runs in the first innings of the first Test against Australia at Rawalpindi on Saturday. On a pitch that offered nothing for the bowlers, Azhar Ali played a terrific knock. He and Imam ul-Haq shared a 208-run stand for the second wicket to lay the foundation for a big first innings total. After lunch, Imam-ul-Haq was dismissed for 157. Azhar however continued his innings and scored a magnificent 185 before playing a reverse-sweep off Marnus Labuschagne that brought his downfall. Follow Insidesport.in for all Pakistan vs Australia LIVE updates.

FOUR! Rizwan gets a top edge that flies over the keeper for another boundary.

WICKET! Azhar Ali departs for 185 after playing a reverse sweep that flew straight to Pat Cameron Green at short third man who takes a comfortable catch.

SIX! Azhar Ali hits hard and hits long over Deep-midwicket for a six off Lyon.

WICKET! Babar Azam tucks one to mid-wicket and looks to take a quick single, but Labuschagne with a direct hit catches him short of the crease.

FOUR! Third boundary of the over. Plays it late yet again and hits the boundary

FOUR! Back to back boundaries for Azhar. Plays it late past the slip.

Pakistan go into Tea having scored 394/2

FOUR! Babar Azam times his sweep to perfection as he finds the boundary behind square.

SIX! Azhar Ali comes down the track and hits a maximum over deep-midwicket

FOUR! Azhar Ali times a good-length delvery to perfection that rushes to the deep-midwicket boundary.

FOUR! Babar Azam times a full length delivery to perfection with a glorious straight drive down the ground.

FOUR! Azhar Ali unleashes his cover drive to bring up a boundary.

WICKET! Pat Cummins finally breaks the partnership as Imam misses a delvery that hits his pad and umpire gives it out. Review shows the ball would have crashed middle stump.

CENTURY! Azhar Ali goes down the track and hits one over the leg side to bring up his century.

Pakistan go into lunch having scored 302/1

300 comes up for Pakistan

FOUR! Imam-Ul-Haq looks to flick a ball that goes down the leg side, it hits the pads and rushes to deep fine-leg boundary past a diving Alex Carey.

FOUR! 150 for Imam-ul-Haq Imam flicks off the backfoot through mid-wicket for a boundary. Brings up his maiden 150.

Australia miss an opportunity! Imam gets a faint edge to the keeper and the Australian team goes up in appeal. Umpire gives it not out. Pat Cummins opts to not review it. UltraEdge shows a slight spike as the ball passes the bat.

FOUR! Azhar Ali brings out the reverse sweep to move into the 90s.

FOUR! Azhar Ali scores the first boundary of the day. Gudes a short-pitched delivery over slips.

Imam-Ul-Haq and Azhar Ali walk out to bat

@10:30 Players from both the teams pay tribute to Shane Warne by observing a minute of silence.

Having won the toss and elected to bat first, Pakistan batters made full use of the flat batting paradise on offer in Rawalpindi. The famed Australian pace trio Mitchell Starc, Pat Cummins and Josh Hazlewood couldn’t generate much movement off the surface as the openers navigated through the opening exchange without much trouble.

The openers almost went unscathed into the first session before a rush-of-blood moment from Shafique brought his downfall. With an over left for lunch, the right-arm batter was one big hit away from a half-century and decided to take Nathan Lyon on for a maximum. However, he didn’t make the desired connection and Pat Cummins covered good ground to take a tumbling catch charging to his right from mid-off. Australia claimed the solitary scalp while also keeping Pakistan’s run-rate below three per over.

The wicket broke the 105-run opening stand as Pakistan went into the break at 105/1. With no success in the middle session for visitors, Pakistan went 171/1 for tea. With only eight runs away from his maiden test century, Imam started steadily after the break. He eventually got to his maiden Test ton with a check drive off Starc in the 66th over. With exhausted pacers, Lyon assisted the visitors to complete the day’s quota as Imam (132*) and Azhar (64*) went through to stumps at 245/1.

Resuming the action on Day 2, Imam and Azhar continued from where they left-off, making life difficult for Pakistan bowlers. Imam-Ul-Haq brought up his 150 with a beautiful flick.